The Best Places To Learn About Indigenous Australian Culture 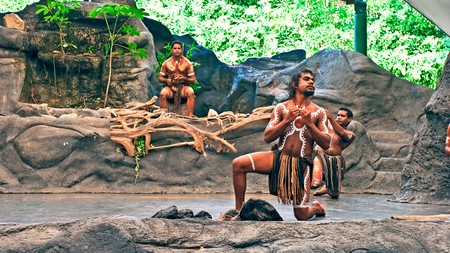 After generations of oppression, a succession of Aboriginal and Torres Strait Island art and cultural centres have opened up across Australia, shining a spotlight on the rich and ancient traditions of its original custodians. From art galleries and workshop venues to full-scale cultural villages – Culture Trip rounds up the best places to learn about Indigenous Australian culture.

From the temperate forests of Australia’s coastline to its rugged desert country, its Indigenous people have lived in harmony with their natural environment for more than 40,000 years. However, colonisation in the late 18th century wrought havoc, resulting in the loss of traditional lands and the corrosion of a deeply spiritual way of life that had been passed down through generations. Despite the challenges that Indigenous Australians have faced over the past two and a half centuries, a cultural resurgence can be seen with an increasing number of Aboriginal centres opening, encouraging young Indigenous people to take pride in their traditional culture, and educating the wider community about its richness and complexity.

About 80km (50mi) north of Darwin, the Tiwi Islands are one of the world’s last frontiers. These remote tropical islands are best known for their exquisitely carved and painted Pukumani totem poles, traditionally used during burial ceremonies to appease the spirits of departed loved ones. Tiwi Design, on Bathurst Island, is its main cultural centre and houses gallery space and a museum. Due to its remote location, the best way to visit is to join the outstanding Tiwi by Design Tour, accompanied by a knowledgeable Tiwi guide. Highlights of this popular tour include a traditional welcome ceremony, afternoon craft session and plenty of local hospitality.

Located approximately 14km (8.7mi) northwest of Cairns, in far northern Queensland, Tjapukai is one of Australia’s largest and most developed Aboriginal cultural centres. Celebrating the traditions of the local Djabugay people, the park offers a wide variety of interactive experiences, including guided bush food walks, practical demonstrations and creative activities, such as weaving with locally sourced plant fibres. Another highlight is Tjapukai Cultural Village, where visitors can observe a corroboree (meeting) and fire-making ceremony, accompanied by dancers, didgeridoo and other traditional musical instruments.

Characterised by rugged gorges and desert country, Western Australia’s Kimberley region possesses a rich and ancient Indigenous heritage. Travellers seeking deeper insight into the traditions of the local Miriwoong people will find a few hours spent at Waringarri Aboriginal Arts in Kununurra to be a highlight of their visit. The centre houses one of Kimberley’s most outstanding galleries, which exhibits works in various media by local artists, including natural ochre paintings, sculpture and wood carvings. Waringarri Aboriginal Arts also organises guided art, culture and bush food tours, and serves as the venue for Corroboree Under the Stars, an annual extravaganza of music, song and dance.

The Walyalup Aboriginal Cultural Centre, in Fremantle, celebrates the traditions of the Noongar people in southwest Western Australia. The centre offers a range of workshops for both adults and children, enabling both visitors and local people to immerse themselves in Noongar culture, language, music and creative activities. Emphasising the strong ties Indigenous people have to their natural environment, the theme of these programs often reflects the six traditional Noongar seasons.

The Torres Strait Islands, located between Australia’s Cape York Peninsula and New Guinea, are the home of several unique Indigenous Australian communities. Promoting the history and culture of the local islanders, the Gab Titui Cultural Centre on Thursday Island is a treat for visitors who dare to roam off the tourist trail. Overlooking Normanby Sound, the centre serves as a gallery for significant cultural artefacts and contemporary art. The lives of the people of the Torres Strait Islands have, since time immemorial, been intertwined with the sea and this is reflected in the works that are present in the gallery. As well as paintings, wood carvings, masks and linocut prints, many artworks incorporate products of the ocean such as mother-of-pearl and shells. During special occasions or the opening of new exhibitions, fortunate visitors may also have the opportunity to attend a traditional music and dance performance at Gab Tatui’s outdoor performance space.

Surrounded by the lush forest of the Burleigh Heads National Park, Jellurgal Aboriginal Cultural Centre offers an unforgettable opportunity for travellers to the Gold Coast to learn about the traditional culture of the area’s original custodians. The centre’s popular guided walking tours introduce integral elements of the local culture such as connection to the land, bush tucker, herbal medicines and spirituality. A vibrant art gallery lies at the heart of the centre, so you can appreciate the talents of local artisans and even buy a souvenir as a reminder of your visit.