The 6 Best Donut Shops In Melbourne 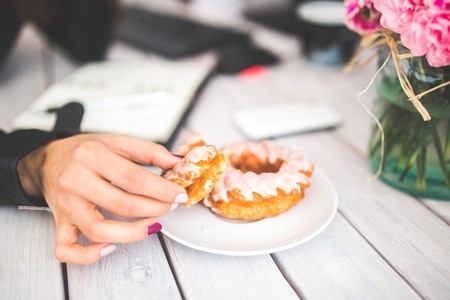 Whether you spell it donut or doughnut, these deep fried bullseyes are taking over Melbourne. From unassuming vans serving warm golden baubles oozing red jam filling, to hole-in-the-wall stores glazing novelty donuts topped with cornflakes, pistachios, and meringue, Melbourne’s treats are iced, sugared and ready for consumption. These stores offer a trip down memory lane to a time when you used to pick up a pink iced donut from your local bakery after school – with a gourmet upgrade to please your discerning adult self. This is your guide to the best in Melbourne, and ‘donut’ let anyone tell you that these treats aren’t healthy – we like to think of them as nourishment for the soul.

Dessert Shop, Pastry Shop, Dessert
Facebook
Email
Twitter
Pinterest
Copy link
Share
Map View
It may look like a broken-down caravan, but Olympic Doughnuts is one of the most beloved businesses in Footscray with fans rallying around the shop when the Regional Rail Upgrade Link at Footscray station threatened to close the business. Now, with a state government guarantee to remain open, Olympic Doughnuts can continue serving commuters just as it has been since 1979. Pierced by the nose of a ceramic dolphin shaped dispenser, the hot jam is pumped into golden doughnuts which are crisp on the outside and soft on the inside.
Open In Google Maps
51 Irving Street, Footscray, 3011, Australia
+61396894818
Give us feedback

Over-achiever and Melbourne restaurateur Raph Rashid is responsible for Beatbox Kitchen, Taco Truck, Juanita Peaches and Edward Street’s All Day Donuts. With a rotating menu including Chocolate Crackle to Caramel Cookie, Lamington, Banana Cheesecake with Raspberry Glaze and Pistachio, Peach Pie, Jaffa, and Lime Brulée you’re sure to try a new flavour offering each time you visit, and it’s anyone’s guess just what combination they’ll come up with next. Wash down those delicious donuts – because let’s be honest you cant just have one – order a Seven Seeds coffee.

Yay! A caramel cookie and a raspberry white chocolate (I think) with this lovely who just arrived in Melb two days ago 😘❤🙆💕 Woop woop!

Known for reinventing classic flavours and desserts such as Peanut Butter and Jelly, Bombe Alaska, Key Lime Pie, Mint Slice and Maple Bacon, Doughboys champion familiar combinations with surprising twists. Hand-dipped daily, Doughboys Donuts can be found at their permanent residence on Bourke Street as well as in cafes including Top Paddock and Kettle Black – and with an Instagram following of 56.9k, these donuts are quick to sell out. Owner Walter McKenzie takes pride in ensuring that every component is made in-house and supports local farms by sourcing free range eggs from Gippsland and butter from Warrnambool.

Market
Facebook
Email
Twitter
Pinterest
Copy link
Share
Map View
When Arnold Bridges and Dave and Lucy Christie purchased the business back in 1950, they could never have foreseen that the American Doughnut Kitchen would become a Melbourne icon. Trading at the Queen Victoria Market from a 1950s Kombi, American Doughnut Kitchen serve hot jam donuts five days a week until sold out – and take our word for it, they do sell out. Sprinkled with sugary specks and injected with the original raspberry jam from a family recipe, these golden nuggets ooze with flavour and warmth.
Open In Google Maps
Queen Street, Melbourne, Victoria, 3000, Australia
+61420521507
Visit Website
Give us feedback

Taking inspiration from New York’s Momofuku, Candied Bakery is a carb-loading mecca in Spotswood with breads, croissants, pastries and pies on offer as well gourmet donuts. The bakers here aren’t afraid to experiment with combinations and sticky glazes, and a few of the best flavours seen in their cabinet include Pavlova, Honey Joy, Fairy Bread, Raspberry meringue and choc liquorice. Drop by, pick up a loaf of bread and a finger-licking donut to go.

Cafe, Coffee Shop, Coffee, Dessert
Facebook
Email
Twitter
Pinterest
Copy link
Share
Map View
Located in a laneway off La Trobe Street, Shortstop is a coffee and donut shop that minimizes greasiness and maximises flavour. Forget over-the-top donuts with sentence-long names that are piled with toppings, at Shortshop the flavours are distinct, refined and internationally inspired. Try the British-inspired Earl Grey and Rose, New Orleans Iced Coffee, Peanut Butter and Caramel, Spiced Chai or the Triple Matcha Cake. Having recently celebrated their second birthday Shortstop shows no signs of slowing down, so stop by before midday as you definitely dough-not want to miss out.
Open In Google Maps
12 Sutherland Street, Melbourne, Victoria, 3000, Australia
+61499366883
Visit Website
Give us feedback
Give us feedback