The 5 Best Melbourne Street Artists and Where to Find Them

Melbourne is a prominent global endorser of street art. The city’s government is increasingly supportive of art in public spaces and has approved several key areas of the city for use by street artists. Although graffiti and tagging is still illegal, exploring the more creative side of street art, using stencils, murals and paste-ups is encouraged. We check out five of the best Melbourne street artists and where to find them. 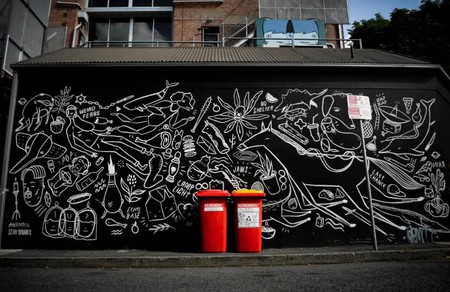 Originally from Tasmania, Ghostpatrol now works in Melbourne, where he has gained international recognition for his works both on the street and with other more traditional media. Describing himself as an experimenter and not an artist, Ghostpatrol’s style is a mix of fantasy and science. As an artist/experimenter he is trying to explore, through his art, what it means to be alive and how this existence will transfer into the future. Entirely self-taught, Ghostpatrol’s works were in the beginning mostly temporary in nature, with a focus mainly on stencil work and paste-ups. At present however, Ghostpatrol has been more involved with illustration, painting and creating bigger installations. True to his roots, Ghostpatrol still takes his art to the streets during the evening and his adventurous characters can be seen decorating many buildings and public fixtures in the city. Due to his distinctive style, Ghostpatrol’s work has, for the last few years, gained a somewhat iconic status in the illustration and graphic design world. Ghostpatrol’s work incorporates natural landscapes, especially forests and animals, often depicted in scenes bordering on surrealism. For those interested in finding the artist’s work, head to the corner of Napier and Exhibition Street in Fitzroy and start exploring.

More recently known under his real name, Regan Tamanui, Ha-Ha is perhaps one of Australia’s most prolific street artists, his stencils having gained much public attention both in Australia and Tamanui’s native New Zealand. Specializing in large scale, multi-layered paste ups that can extend to covering whole multi-storey walls, Tamanui’s art is focused on Australian and Anglophone pop-culture. In an age of digital augmentation and computer assisted image processing, Tamanui still swears by analogue methods, avoiding the use of computers and sourcing all of his images directly from newspapers. Using his art, Tamanui tries to explore the power of mass media in society and the current manifestation of popular culture that promotes obsession with materialism and shameless self-promotion. Tamanui’s most recognizable elements are his trademark stencils of Ned Kelly, the infamous Australian outlaw. Being a self-taught artist, Tamanui has come a long way from an obscure street artist to a person of international credibility and talent, greatly respected in the art world. His work is exhibited across the globe and he is permanently represented in galleries around Australia. When looking for Tamanui’s work in Melbourne, one should start by exploring Stevenson Lane, Tattersalls Lane or ACDC Lane, all situated conveniently in the very center of the city. 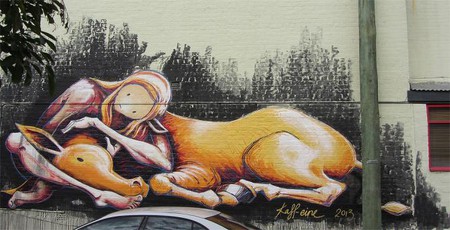 Based right at the heart of Melbourne’s street art scene in Fitzroy, Kaff-eine is an established artist whose works have been exhibited in capitals around the world. She is also active in linking street art with social service organizations, raising money for and bringing attention to vulnerable children from disadvantaged backgrounds. Her latest endeavor has been a collaboration with Australian family services charity Berry Street, for whom she created a series of murals around the city of Melbourne, all of which were based on the writings of pupils form the Berry Street school in Melbourne. The whole creative process – alongside the original writings – has been preserved in a beautiful hardcover photo book titled HEARTCORE. Indeed, Kaff-eine is also an accomplished illustrator with several children’s books in her portfolio. Children’s literature comes naturally to the artist’s style, which is illustrative and mostly freehand with very fine line-work. Kaff-eine’s works are usually beautiful depictions of delicate, vulnerable characters that have a hint of darkness or mystery to them. One of the latest symbols that the artist has explored through her artwork has been depicting animal/human hybrids, or more accurately, trophy animals with human bodies. You can see Kaff-eine’s work in several locations around Melbourne, such as Rutledge Lane. However, curios street art aficionados will find bits and pieces from her around Fitzroy and East Brunswick. 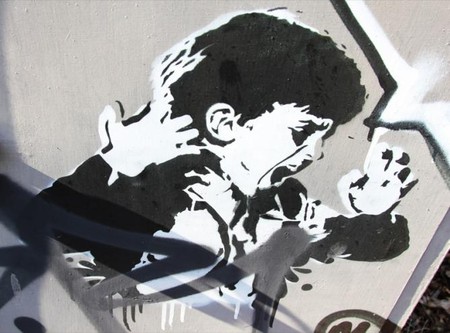 “Meggs Stenicl in Richmond, Melbourne” | by © the euskadi 11/Flickr

David Meggs Hooke is arguably one of Australia’s most internationally known street artists. Having expanded his career from street art to direction and production, Meggs continues to tour the world displaying his artwork in exhibitions across the globe. From his childhood growing up in the eastern suburbs of Melbourne, Meggs immersed himself in the comics and sci-fi of the 1980’s. This formative background shines through all of Meggs’ work, as the artist adds a certain layer of nostalgia to the heroes and villains of his adolescence by using them in layered artworks. In his art one finds the regular intermixing, mismatching and subverting of famous pop-culture icons from the 1980s up to present day. Meggs takes often monotone images of these icons and transfers to them a degree of duality, exploring through his art the morals of modern pop-culture. Meggs works with mixed media as his work is an amalgamation of aerosols, stencils and small pictures. Recently, his pieces have featured elements of tattoo culture, religious imagery and Asian culture. To witness the works of this ever evolving artist, you can explore Melbourne’s fascinating Fitzroy district, stopping on the corner of Brunswick and Westgarth Street for Meggs latest major piece in the city.

Building
Facebook
Email
Twitter
Pinterest
Copy link
Share
Map View
One of Melbourne’s most prominent street artists, Rone has been based in Melbourne since 2002. Originally working on designing skate decks and local skate parks, Rone eventually moved on to producing massive murals towering over the city’s streets. Rone’s artwork mainly focuses on cropped images of gorgeous female faces that are often placed strategically so they would appear to be looking at the observer. Rone’s aim is for the images to be striking examples of beauty in the city. The artist’s choice of canvas lends itself ideally to his art as the natural decay of his murals creates a moving mixture of attractiveness and decline. Deliberately avoiding political messages in his works, Rone focuses on capturing beauty and trying to improve the image of the cityscape and the building on which he is working. For Rone, street art needs to be something fundamentally aesthetic, something that can be understood in an instant, something that brings the streets to life. One of Rone’s most recent works, a nine storey high mural of the Australian model Teresa Oman, can be found near the corner of Exhibition and Little Collins Street in Melbourne. Other notable places to find Rone’s work in Melbourne are on and round Fitzroy Street and Brunswick Street in Fitzroy.
Open In Google Maps
Melbourne, Australia
Give us feedback
Give us feedback