The 5 Best Beaches in South Australia 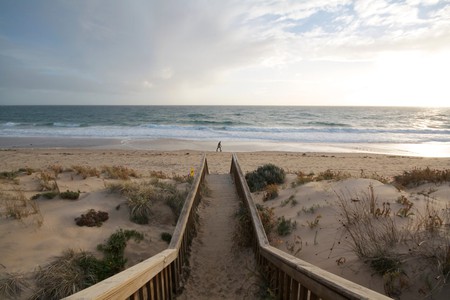 While beaches in South Australia are often overlooked in favour of the famed Bondi Beach in New South Wales and Whitehaven Beach in Queensland, there’s no reason to turn up your nose to the white sand, glass-water beaches of South Australia. From rugged and secluded cliff-edged beaches with storm-tossed waves to beaches with calm waters and surf-friendly waves that are perfect for families, these are some of the best beaches South Australia has to offer.

While Maslin Beach is well-known for its natural beauty, it’s also famous for another significant reason: being one of Australia’s first nudist beaches. However, you don’t have to be starkers to enjoy a relaxing day on the white sand. The water is calm and the jagged cliffs provide a stunning backdrop to a relaxing swim or a game of beach cricket.

If you are after that breezy freedom and all-over tan, signs are posted everywhere that state clearly where clothes are and are not required. Nude sunbathing is only permitted on the far southern end of the beach, at least 800 meters (about half a mile) from the main entrance, so it’s possible to avoid those suntanned bottoms. There is a draw to it, however: The southern end is where the ochre-coloured cliffs curve into secluded coves, creating small pieces of paradise. The southern end of the beach can be reached by a steep staircase from the car park from Tuit Avenue; if the stairs don’t wind you, it’s an amazing, sweeping view of the beach.

In January, Maslin Beach hosts the annual Pilwarren Maslin Beach Nude Games. It was previously known as the Nude Olympics, but the Australian Olympic Committee wasn’t fond of the association. Activities include a three-legged race, tug-of-war, and the annual ‘Best Bum’ award. 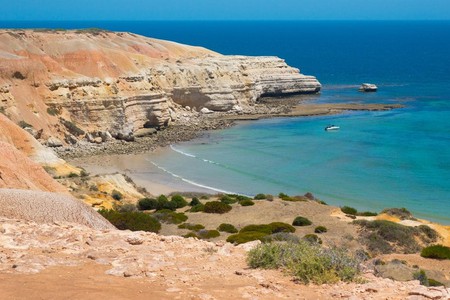 You’ll need a car for this expedition so you can explore Gunyah Beach to its full potential. Gunyah is the Indigenous word for ‘hut’ or ‘shelter’, often made from bark or tree branches.

Gunyah Beach and its famous sand dunes are located near Coffin Bay, a small town next to aptly named Coffin Bay National Park. From there, you can drive down a sealed road to the park and straight onto Gunyah Beach. It’s secluded in a stunning, panoramic way; as soon as you emerge from the greenery, the sweeping views will make you feel like the last person on Earth. The sand dunes are stunning in this landscape, and especially when illuminated by the glow of twilight, so it’s worth getting there and walking the dunes for a few hours before the sun sets.

If you’re there at twilight, that’s when the wildlife comes out; look for beach-roaming kangaroos and foxes, and make sure to drive safely! 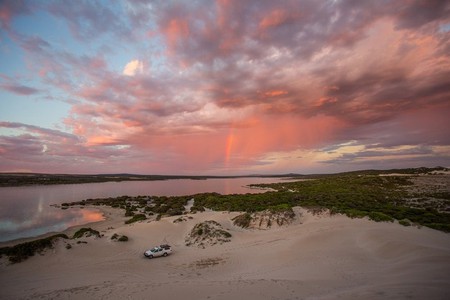 4WD is the best way to explore the Eyre Peninsula. | © Lisa Zhou / Shutterstock

Merdayerrah Sandpatch is the westernmost beach in South Australia, lying at the bottom of the remote Bunda cliffs. The beach is 8.5 kilometres long (5 miles) and lined with white calcareous dunes that stretch up to reach the crest of the famous Nullarbor Plain. There’s a walking track down to the shore, and while there aren’t many ideal places to swim, experienced surfers will find reef breaks that are incomparable to those on Australia’s east coast. The rock platforms that jut out of the beach are perfect for fishing, and whatever activity you choose — even just a walk along the beach — will be accompanied by the backdrop of the Nullarbor Plain and the cliffs, which are guaranteed to take your breath away. The spot also provides a border to the magnificent coastline, Wilson Bluff. 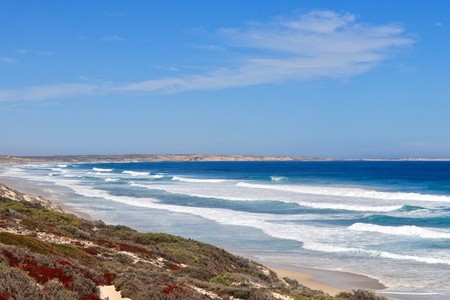 South Australia has some of the most wildly beautiful beaches. | © ettadallas / Shutterstock

North of Kangaroo Island’s rugged north coast, Western River Cove is sheltered by two headlands, situated a mere 200 meters (0.12 miles) apart, making a secluded, tranquil cove that’s an effort to get to, but definitely worth it. Fishing boats sometimes anchor here for the schools of fish that pass through, and the calm waters are perfect for swimming, snorkelling, and diving. The headlands and reefs are home to hundreds of species of marine life, and it’s worth packing a snorkel to get close to coral, fish, and even a sea turtle or two. The cove has the best of both worlds, with a river running into the secluded white beach.

Western River has a camping ground nearby that is accessible to the beach via a walking bridge, but aside from that, it’s a secluded paradise. 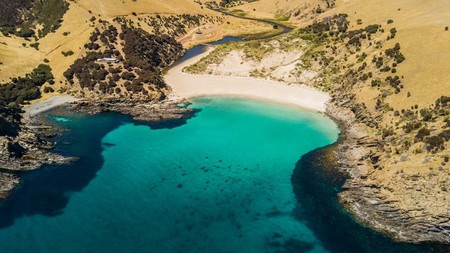 There’s a reason Glenelg Beach is popular with travellers, and that’s because it’s a great place to be. Just 25 minutes from Adelaide’s CBD, Glenelg has everything you want in a day out of the city: a clean, white sand beach, a long jetty for that perfect Instagram photo as the sun goes down, shops, and well-priced cafes and restaurants to enjoy a glass of wine and some freshly caught prawns. The Glenelg Beach Surf Club holds prime position over the beach. You can get a reasonably-priced schooner and sit out on the balcony as the sun goes down; you also won’t break the bank for such amazing views.

If your skin tone isn’t suited to sunbathing, try swimming with the dolphins, scuba diving, or stay a little closer to the surface with a snorkelling trip.

If you want to take a trip down memory lane, or even just have oodles of innocent fun, visit activity hub The Beachouse, which has waterslides, dodgem cars, carousals, mini golf, and every arcade game your twelve-year-old self could ever imagine. 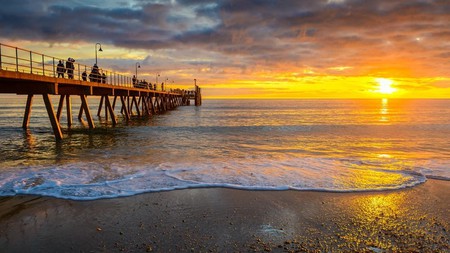 Everyone gathers to watch the sunset at Glenelg Beach. | © amophoto_au / Shutterstock
Give us feedback