The 12 Most Instagrammed Places In Australia 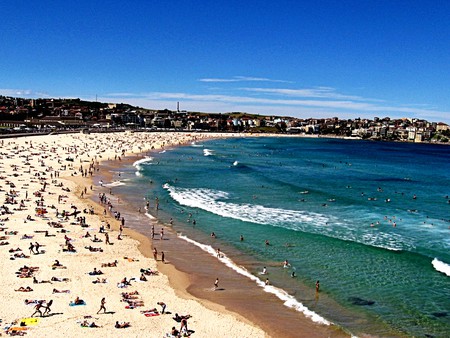 Australia is a country of diverse landscapes, and for decades, tourists have been snapping photos of the most scenic places down under. These days, thanks to social media apps such as Instagram, both locals and tourists can share their pictures with millions of users worldwide, thus, enchanting people from all corners of the globe with the many beautiful sights that Australia has to offer. These are the top 12 most Instagrammed places in Australia according to hashtag numbers.

With tens of thousands of tourists flocking to Bondi Beach each year, it’s no wonder why this one kilometre stretch of sand tops the list of Australia’s most Instagrammed places with 629,064 hashtags. Located seven kilometres east of Sydney, the beach is postcard perfect and has featured on television shows including Bondi Rescue, Bondi Vet and Modern Family.

Home to Sydney’s Entertainment Centre, the Australian National Maritime Museum, Star Casino and Sydney Aquarium, as well as a number of other attractions, restaurants and hotels, Darling Harbour is one of Sydney’s most popular precincts and attracts more than 25 million people per year. With so many visitors, it’s no surprise that Darling Harbour has racked up 315,151 tags on Instagram.

Visible from space, the Great Barrier Reef is the largest coral reef system on earth, stretching 2,300 kilometres, and it holds the honour of being one of the seven natural wonders of the world. Dating back 18 million years, the reef is home to more than 1,500 species of fish, 215 species of birds, as well as marine mammals and reptiles and is visited by two million tourists each year who have tagged the picturesque organism 309,211 times.

The heart of the great barrier reef 👌🐠

Opened in March 1932, this through arch bridge crosses Sydney Harbour and carries rail, pedestrian, bicycle and vehicular traffic across from the central business district to Sydney’s North Shore. Nicknamed ‘The Coathanger’, the bridge is the tallest steel arch bridge in the world, measuring 134 metres, and attracts daring climbers, including Oprah, who ascended to the top. Sydney Harbour Bridge has been tagged 240,970 times.

Located within the Whitsunday Islands in Queensland, Hamilton Island is a tropical oasis which attracts thousands of holidaymakers each year. With turquoise waters, palm trees, luxurious hotels and white beaches, it’s no wonder that the island has a total of 197,200 tags.

Named after shipwreck survivor Eliza Fraser, the world heritage-listed island is the resting place of another wreckage, the SS Maheno. The shipwreck and the geological diversity of Fraser Island are two of the major draw cards for tourists. The island is home to rainforests, mangroves, swamps, woodlands, sand dunes and coastal heaths and is known for its stunning beaches. Fraser Island has amassed 194,470 tags.

Listed as a UNESCO World Heritage Site, Uluru is located in Australia’s Northern Territory, 335 kilometres from Alice Springs. The majestic sandstone rock formation is 348 metres high and has a circumference of 9.4 kilometres and draws 400,000 visitors each year. Also known as Ayres Rock, the sacred formation has been tagged 146,112 times.

The National Gallery of Victoria is Australia’s oldest, largest and most popular art museum, dating back to 1861. The gallery holds a collection of 73,000 works of Australian, Indigenous and international significance, which are housed across two sites: NGV International and the Ian Potter Centre. NGV also hosts a number of exhibitions and has been tagged on Instagram 136,655 times.

Famous for its local population of smiling marsupials known as quokkas, Rottnest Island is situated off the coast of Western Australia and attracts 500,000 tourists yearly, many of whom visit with the hope of capturing a quokka selfie. Rottnest Island has been tagged 77,589 times on Instagram, and many of the snapshots feature the island’s furry residents.

The most scenic attraction on Victoria’s Great Ocean Road are The Twelve Apostles, which attract 1.2 million visitors annually – many of whom choose to visit the site at dusk or dawn. The limestone stacks have a total of 65,642 tags on Instagram, and the lookout and walkways are open 365 days a year.