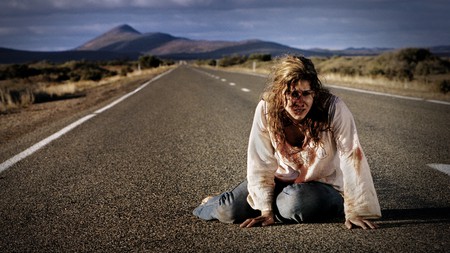 We all know that the Australian outback and wildlife can bring frightening thoughts to many people both within the country and abroad as well. However, it is the horror and thriller films that Australia produces that are truly frightening. We have discovered the most frightening films throughout time that you do not want to watch alone, in the dark… or even in the outback, alone!

Discover the violence and the true hell of the Australian outback in the film adaptation by Evan Jones of the 1961 novel by journalist and author Kenneth Cook, Wake In Fright. A discontent young teacher working in a remote community gets stuck in a brutal old mining town on the way to Sydney. It is here that a group of men stuck in their ways of gambling, fist fighting, guzzling tinnies (cans of beer) and hunting for kangaroos keep this teacher’s horrific never-ending alcoholic bender going. This almost forgotten film also portrays a stomach-turning sequence of a drunken nighttime kangaroo culling – which was, in fact, filmed on a real-life kangaroo hunt.

Box office success – long before iconic The Blair Witch Project – of Peter Weir’s haunting mystery is based on Joan Lindsay’s 1967 novel, Picnic at Hanging Rock. Although this fictional story suggests real-life happenings, you can’t help but get sucked into the stories questioning each of the events and facts that come up. At the beginning of the film, a group of schoolgirls vanish at the eponymous Victorian location without a trace; only one girl was found shortly later who cannot remember a whole lot, whilst the others were never heard from again. Frozen in time, the only possible explanation is of Edgar Allan Poe’s famous poem ‘all that we see or seem is but a dream within a dream.’

Following on from Weir’s Picnic at Hanging Rock is the unsettling reality behind dreams that exists within The Last Wave. A logic-thinking lawyer is tasked to defend a group of Indigenous people accused of murdering an Aboriginal person; however, the cause of death is unknown. Coming to realise there may be a relation between Dreamtime and tribal rituals to the death, this realistic movie pits humans against both natural phenomena and Aboriginal spirituality. As people begin to materialise in his dreams, the real and unreal merge together, constructing a terrifying thought – what really are dreams and what is reality?

If swooping magpies and ferocious animals are your biggest fears, we suggest you skip this film. Colin Eggleston’s hybrid horror/thriller, relationship drama, Long Weekend, is the result of nature fighting back. A disrespectful couple who retreat to the beach in order to salvage their marriage, face the full force of Mother Nature as she fights back after many careless acts occur, including starting fires from a cigarette and running over a kangaroo. The psychological intensity seen in this minimalist horror results in thinking about everything and nothing. Prepare yourself for a ‘kind of David Attenborough special gone wrong’.

Dubbed the Australian Hitchcock, Aussie filmmaker Richard Franklin brings Road Games, an outback thriller, to the screens with what was at the time, the most expensive film ever made in the nation. Featuring a sleep-deprived truck driver travelling from Melbourne to Perth who watches those on the roads and creates stories about each of them. However, he’s not your average truckie. With word of a murderer on the loose who is said to be butchering hitchhikers, he becomes obsessed with tracking him down. What could possibly go wrong?

Featuring a young Nicole Kidman, Dead Calm sees Rae and her husband John head out to sea on a luxury yacht after losing their infant son in a car accident. They spot a young survivor frantically rowing towards them from a sinking ship, who claims his crew died from a fatal disease. However, upon investigation John discovers everyone on board had been slaughtered as he gets trapped below the deck and the water continues to rise. What’s going to happen to John, and what will happen to Rae who is stuck with the psychotic survivor who seems rather hungry?

Enter the game, the games of the ingenious villain – known as the Jigsaw Killer – who creates puzzles for both the victims and police, in Saw. The sadistic horrors experienced by the victims begins in a windowless, locked public toilet, where two men are chained to the walls by leg irons. Featuring a corpse, a gun and hacksaw lying on the floor between them, as well as a tape recording that orders the Doctor to kill Adam by six o’clock, otherwise his family will be murdered. The detectives, in a parallel story, face their own jigsaw to uncover the killer in time. Claimed to be ‘deliriously inventive and sadistically cruel’, enter at your own risk!

An Aussie guy and two British girls head to the remote West-Australian outback on the journey of a lifetime, in a grimy gut-chiller Wolf Creek. In the middle of nowhere, their car breaks down, where the unsettling events begin to unfold as Mick works on their vehicle. Drawing on the inspiration by various Australian murderers – such as the Milat backpacker murders – this psychotic thriller features torture and mutilation of the victims that is bound to provide nightmares to even the biggest thrill seeker.

We all know about the drive of puppy love, but not to the extent that it goes violently wrong. The Loved Ones takes on the tale of an imaginative first date curated by lovesick Lola after Brent rejected her proposal to attend prom together. Finding himself tied to a dining room chair, Brent faces torture and abuse by Lola and her father as they make use of knives, power drills, glitter and blood in creating a prom of her dreams. As Lola is crowned Prom Queen and Brent as the King, we’re sure he wishes he said yes to begin with…

Featuring a true-crime subject, Snowtown – also known as The Snowtown Murders – is set in the South-Australian countryside where a mother leaves her boys with a ‘friendly’ neighbour so she can go out for the night with her new boyfriend, John. However, this neighbour starts taking nude polaroids of the boys, but this isn’t the beginning. John takes it upon himself to steer this paedophile out of the community, by chopping up kangaroos, and with the help of Jamie (one of the boys), spread the pieces across the front porch. Realising John is one of Australia’s most notorious serial killers, you will see pivotal torture scenes – like the removal of toenails – so gruesome you will want to turn away, if you can…

The disturbing story of a difficult child and his widowed mother forms the mind-bending narrative of the horror film, The Babadook. This partly psychological thriller sees the little boy discover an odd book in his room featuring a top-hatted, expressionist-looking shadow called Babadook. His mother begins to read the story aloud to her son; however, this creates a sense of fear – a fear of the monster that plants into the dreams and hallucinations of the boy, arousing out-of-control behaviour. Fearing her son’s actions, she starts to medicate him, but will this be enough to save them?