The 10 Best AC/DC Songs Ever, Ranked 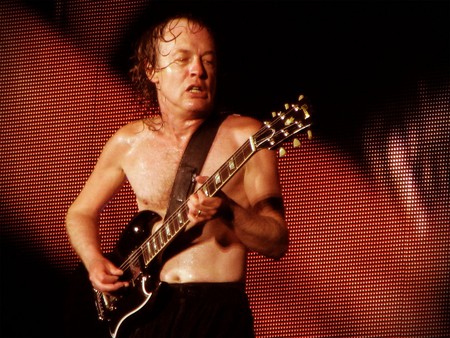 Australia is a country that boasts no shortage of musical icons — the Bee Gees, INXS, Cold Chisel and Kylie Minogue to name a handful — but few acts have dominated the international stage quite like AC/DC, with their inimitable brand of high voltage rock ’n’ roll they’ve exported around the world for almost half a century. So out of the 16 studio albums and countless songs the band has recorded since 1973, what are Acca Dacca’s greatest hits? This list ranks AC/DC’s top 10 tracks.

Where do you start to describe the song that’s become the anthem of struggling musicians across the globe. There’s the iconic bagpipe call and response, a nod to Scottish heritage shared by lead singer Bon Scott and band founders the Young brothers. There’s the Australian schoolyard parody, ‘It’s a long way to the shops if you want a sausage roll’. And then there’s that legendary music video, cruising around the streets of Melbourne causing a ruckus on the back of a flatbed truck (fun fact: in 2004, a nearby laneway was named after the band as a tribute).

Like much of AC/DC’s early work, Jailbreak wasn’t heard outside of Australia for years after its release — the single was only rushed into US stores in the early 1980s after the band’s international breakthrough album Back in Black, which followed Bon Scott’s tragic death in 1980. In the meantime, local audiences lapped up the quintessentially Australian underdog story of a foiled prison escape, ‘All in the name of liberty!’.

Acca Dacca were chanting ‘Oi! Oi! Oi!’ years before British punks adopted the battle cry — led by guitarist Angus Young, whose croaky grunts were as much of a trademark as his duckwalk and his sweat-soaked schoolboy uniform. This explosive track captures the dirty, blue-collar sound AC/DC are famous for — it’s now been a fan favourite at gigs for more than four decades.

Politically correct, this song ain’t. Dozens of AC/DC tracks chronicle Bon Scott’s extensive sexual history but none of his lovers are as beloved as Rosie, a woman of ample proportions who surprises Bon with her prowess and vigour between the sheets. Live performances are accompanied by the crowd chanting ‘Angus!’ as soon as they catch a whiff of that energetic riff, as well as an enormous inflatable Rosie that, well, defies polite description.

The first thing you hear on the Back in Black album is the chime of church bells, a sound that simultaneously mourns Bon Scott’s death just months prior and welcomes a new era for the band under fresh frontman Brian Johnson. Described as the greatest comeback album in rock history, the more radio-friendly Back in Black represents AC/DC’s big commercial breakthrough overseas, selling 50 million copies to become the second highest selling album ever, trumped only by Michael Jackson’s Thriller. And it all began with Hells Bells.

The rest of the ‘80s were a stinker of a decade for AC/DC — drummer Phil Rudd was fired in 1983 for a brawl with Malcolm Young, while critics panned underwhelming albums Blow Up Your Video, Fly on the Wall and Flick of the Switch that failed to live up to Johnson’s debut, Back in Black. But the band returned to form in 1990 with The Razors Edge, which opened with Thunderstruck, a frenetic track that’s every bit as electric as the title promises.

Maybe record execs thought the subject matter was too grisly for puritanical American ears because this cracking track about a budget-friendly hitman was another single that got left on the shelf for five years between its release in Australia and the United States — it took the smashing success of Back in Black to bring it to the US in 1981. Despite the violent lyrics, live performances of this concert staple these days are more mirthful than menacing.

If a song about a hitman made the record labels squeamish, this cheeky tune about dirty deeds of a very different kind would’ve given those prudish executives a conniption. Despite the saucy lyrics — “She told me to come but I was already there” — this track is easily AC/DC’s biggest radio hit thanks to a sound that’s easier to tap your toes to than a lot of the band’s tougher early discography.

It might be a long way to the top, but it’s not always rosy when you reach the summit — Angus Young described AC/DC’s gruelling touring schedule in the late ‘70s as a ‘highway to hell’, inspiring this classic track. The lyrics — “No stop signs, speed limit, nobody’s gonna slow me down” — took on a darker complexion when Bon Scott was found dead in a friend’s car in London just months later, dying of acute alcohol poisoning.

If this isn’t the most iconic guitar riff in rock history, it’s got to be in the final — and that’s not the only reason to rank Back in Black as AC/DC’s greatest hit. The title track of their wildly successful comeback album after Bon Scott’s death was the band’s homage to their fallen frontman — not only by rocking poignant lines like “Nine lives. Cats eyes. Abusing every one of them and running wild”, but also by proving there was plenty of life left in the band thanks to a new lead singer worthy of filling Bon’s sizeable boots.