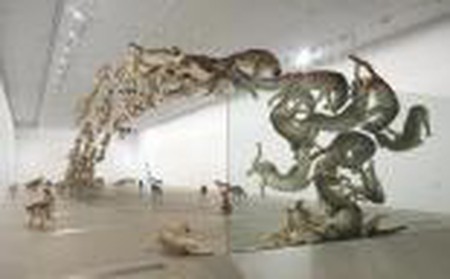 Cai Guo-Qiang’s Falling Back to Earth was on display at Queensland Art Gallery. The show featured installations of 99 replicas of animals drinking from a pristine lake; 99 wolves leaping en masse and colliding with a glass wall and a suspended 31-metre eucalyptus tree, creating a space for contemplation. 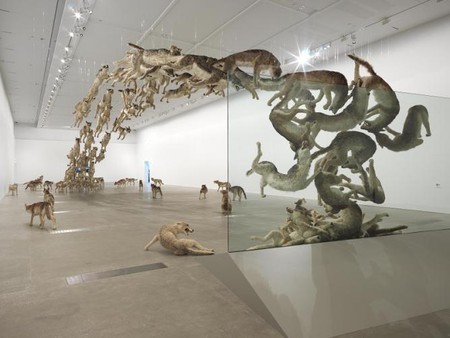 According to QAGOMA Director, Chris Saines, “Cai is shifting his focus from the cosmos to the Earth and to humanity’s complex relationship with nature, while maintaining his keen eye on both the seen and unseen forces that impact life.”

Cai Guo-Qiang said Falling Back to Earth was inspired by fourth century poet Tao Yuanming’s well-known prose poem, Ah, homeward bound I go! “The text captures the concept behind the exhibition, and expresses the idea of going home, returning to the harmonious relationship between man and nature, and re-embracing the tranquility in the landscape,” he said.

Russel Storer, the Museum’s Curatorial Manager, explains that Heritage 2013 is “a mirage-like installation of vast scale. 99 animals appear to have gathered and lowered their heads to drink water together from a lake that is surrounded by white sand.” The image came to Cai Guo-Qiang after he visited Brown Lake (Bummeira) on North Stradbroke Island (Minjerribah). This pristine environment seems far from the cares and conflicts of the outside world. Expanding upon his perception of Queensland as a “last paradise,” Cai has created a gigantic tableau featuring 99 replicas of animals from across the globe – lions, tigers, pandas, antelopes, kangaroos stand peacefully side-by-side, their differences erased for the moment.

Yet, the work has, as the artist himself says, a superficial beauty – the mirage can’t be taken at face value and we don’t know what to believe. The work conveys an almost reverential solemnity in a lyrical Utopian vision loaded with uncertainty. There is a tension between the frozen instant of the animals in the act of drinking and the temporal beat of a drip of water that continually disrupts the water’s surface and the silence of the room. 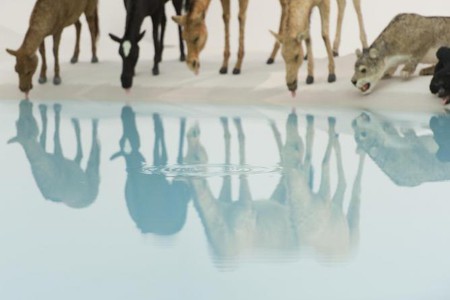 The first single artwork to take up the entire 1,100 square meters of GOMA’s largest gallery space, Heritage presents animals drinking from a lake filled with 170 tonnes of water, which is view-able from a walkway that circles the entire installation. 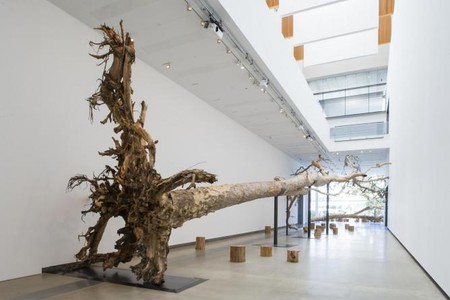 “Eucalyptus 2013, a 31-meter tree suspended along GOMA’s central Long Gallery, came from a plantation earmarked for clearing for urban community development. The work was inspired by the ancient trees of Lamington National Park, and creates a meditative, immersive experience for visitors,” explains Russell Storer, the museum’s Curatorial Manager. 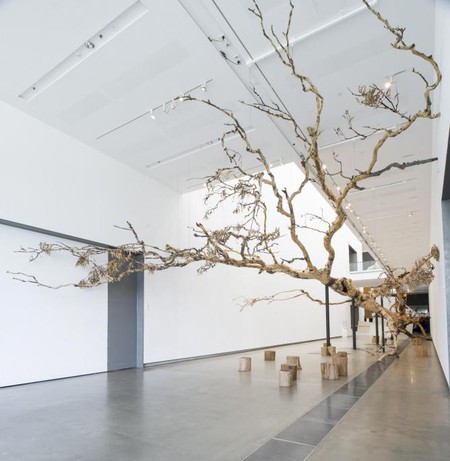 A third major installation Head on 2006 – Cai’s signature work of 99 life-size sculptures of wolves, which was commissioned by Deutsche Bank, Berlin – is appearing in Australia for the first time. In Head On, 99 wolves hurl themselves recklessly into the air, only to hit a glass wall before returning to the beginning. To Cai, the wolf represents bravery and ferocity, an animal that derives its strength in unity. Yet when collective energy is misdirected, such as through the blind following of ideology, disaster can ensue. Commissioned by the Deutsche Guggenheim in Berlin in 2006, Head On was inspired by the city’s turbulent history. The Berlin Wall, which divided the city during the Cold War era, is referenced by the height of the glass panel. 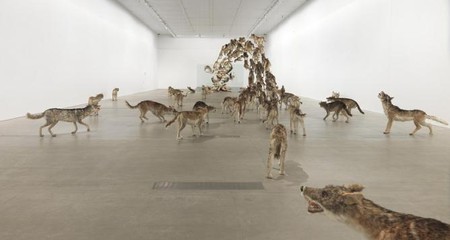