Talk about lucky. This stunning bay has lush blue waters, resident kangaroos and the whitest sand in Australia.

The bay got its name from Matthew Flinders, an English navigator who was sailing around Western Australia in 1802 when a storm broke. Lucky Bay’s calm waters offered him a safe mooring. 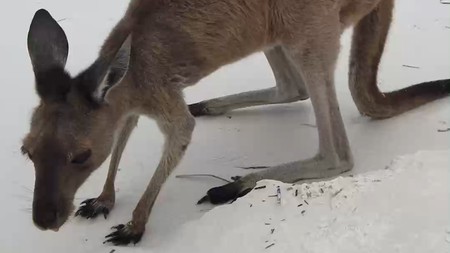 Kangaroos can regularly be seen here, and they’re relaxed around humans | © Culture Trip

Most visitors today are drawn by the chance to share the bay’s photogenic Kangaroo Beach with a bunch of tame marsupials. The beach is in Cape Le Grand National Park, near the relaxed coastal town of Esperance, some 800 kilometres (497 miles) southeast of Perth.

The kangaroos can regularly be seen here, whether sunbathing in the heat of the day or grazing on the grass at the back of the beach around dusk or dawn. It’s forbidden to feed them, but they’re relaxed enough about humans that it’s usually pretty easy to snap a pic or two.

The white sands of Lucky Bay

Lucky Bay’s other claim to fame is its white sands, which combine with clear, blue waters to create a beautiful scene. In 2017, soil science consultant Noel Schoknecht compared samples of the sand at famous beaches around Australia and concluded that Lucky Bay had the whitest grains in the country.

It isn’t just about looks, though. You can swim, surf, snorkel, kayak and windsurf here, as well as go fishing and take bushwalks. There’s also a campground with space for tents and camper vans – it gets popular, so book in advance if you’re planning to stay overnight.

The national park is 50 kilometres (31 miles) from Esperance, and there’s an entry fee of $15 per car. There are several other beach options in the park, including Cape Le Grand Beach, plus numerous trails and a steep two-hour hike up Frenchman Peak (262 metres or 860 feet), which offers panoramic views of the coast and islands. There are also coves and other rocky outcrops to explore once you’ve had your fill of the furry locals and white sands of Kangaroo Beach.