Sidney Nolan: The Best of Australia's Godfather of Paint and Print 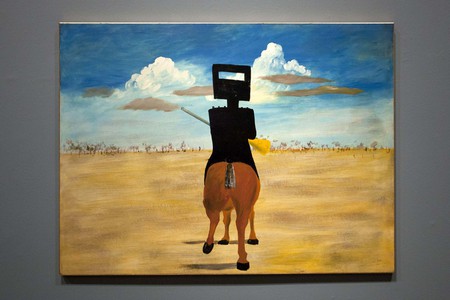 'Ned Kelly' (1946), part of the iconic series of paintings by Sidney Nolan portraying the Australian outlaw. 'Australia' art exhibition, Royal Academy of Arts, London, Britain - 17 Sep 2013. The exhibition, said to be the most significant survey of Australian art ever mounted in the UK, spanned more than 200 years, from 1800 to the present, and ran from the 21st of September to the 8th of December 2013. Photo by London News Pictures/REX/Shutterstock (3029264b)

Hailing from Victoria, Sidney Nolan was one of Australia’s most prolific modernist artists. His work is synonymous with folklore icons. Nolan developed stylised depictions of Ned Kelly as well as the Australian landscape. A member of the Angry Penguins art movement, Nolan’s work has been exhibited internationally, and in 1981, he was knighted for his service to art. Here are 10 examples of Nolan’s iconic artwork.

A standout image within Sidney Nolan’s iconic Ned Kelly series, the simply-titled Ned Kelly transformed the representation of the Australian outlaw by integrating him within Australia’s landscape and national identity. Painted at Heide, the composition places Ned Kelly in a central position on the canvas on top of his horse, holding a gun, with trees dotted on the horizon line. The painting is on display at the National Gallery of Australia, along with 24 other paintings in the series donated by Sunday Reed in 1977.

'Ned Kelly' (1946), part of the iconic series of paintings by Sidney Nolan portraying the Australian outlaw. 'Australia' art exhibition, Royal Academy of Arts, London, Britain - 17 Sep 2013. The exhibition, said to be the most significant survey of Australian art ever mounted in the UK, spanned more than 200 years, from 1800 to the present, and ran from the 21st of September to the 8th of December 2013. Photo by London News Pictures/REX/Shutterstock (3029264b)

One of Sidney Nolan’s many renderings of Ned Kelly, First-Class Marksman captures the outlaw practicing his marksmanship in Victoria’s Wombat Hill before the shootout at Stringybark Creek on 26 October, 1878. In 2010, the painting nicknamed “the missing Nolan” was purchased by the Art Gallery of New South Wales for $5.4 million, thus becoming the most expensive Australian painting ever sold. 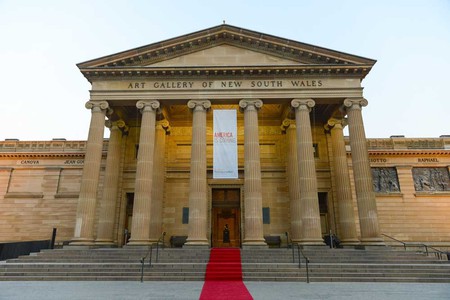 Painted following a year-long excursion to Queensland in 1947, Pretty Polly Mine depicts a suited figure rambling through the remnants of the derelict Mt Isa mine, a once prosperous operation reclaimed by the harsh Australian outback. The figure was none other than the mine’s manager, who Nolan commented “liked feeding birds every morning. Everyone thought he was bonkers, but he fed the birds, rosellas and all.” The painting can be found at The Art Gallery of New South Wales.

Measuring 5.6 meters tall and over 45 meters wide, Sidney Nolan’s Snake comprises 1,620 individual paintings, which together give the impression of a Rainbow Serpent when beheld from a distance. Sidney Nolan created the mammoth art piece between 1970 and 1972, and is said to have been inspired by a mural in a Beijing palace. 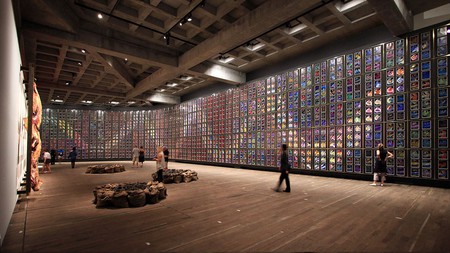 A fan of the St Kilda Football Club, Sidney Nolan painted Footballer in between the Ned Kelly series as an alternative heroic figure. Portraying a football player in the foreground standing beside a goal post with spectators in the background, the painting was thought to depict a non-specific player, until Nolan revealed the identity of the figures to be that of St Kilda football player Bill Mohr.

A nine-panel work comparative with Claude Monet’s Water Lilies, Sidney Nolan’s Riverbend series surrounds the viewer with scenes from the Goulburn Valley landscape in Victoria near Shepparton, where Nolan would walk with his father. The Kelly gang also makes an appearance among the red gums. 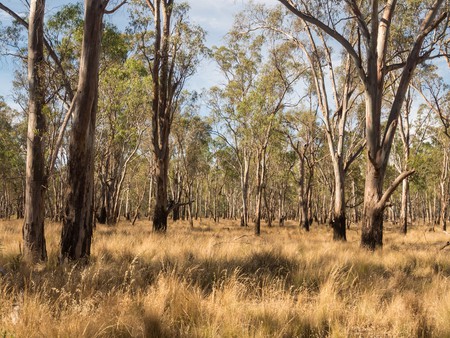 An enduring motif throughout Nolan’s career, Boy and the Moon (also known as Moonboy) was inspired by the silhouette of “John Sinclair’s head against the moon at St Kilda.” The abstract is also said to have been subconsciously inspired by an image of the moon by Andre Masson that appeared in the March-June 1983 Teriade publication Verve. Now located at the National Gallery of Australia, Boy and the Moon was controversially received when it was first exhibited in 1940, as it challenged preconceived notions about modernism.

One of the many historical figures that Sidney Nolan took an interest in was Eliza Fraser. Painted in 1947 on K’gari, Fraser Island, the haunting Mrs Fraser depicts a naked, faceless female in an untamed mangrove landscape. The painting is noteworthy for the many revisions Nolan made to the original over a number of years. 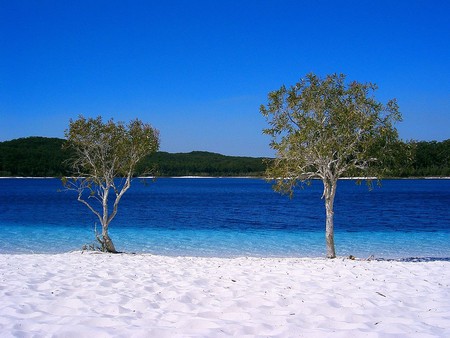 Raised in St Kilda, Sidney Nolan drew from his surrounds, and one of the resulting artworks was Luna Park. Only five minutes from his studio in Smith Street St Kilda, Luna Park is a historic theme park opened in 1912. Nolan’s abstract portrayal features the recognisable ironwork of the Big Dipper. The structures lends itself to the geometric shapes and fun amusement park colours in the painting.

Vastly different to Ned Kelly 1946, The Trial depicts Kelly in handcuffs awaiting sentencing from judge Sir Redmond Barry for several murders, bank robberies, resisting arrest and other minor charges. Executed with enamel paint, The Trial was painted at Heide in 1947, and is currently on display at the National Gallery of Australia. In 1973, Nolan reproduced a wool tapestry version of The Trial, which is now located at the Federal Court of Australia in Sydney. 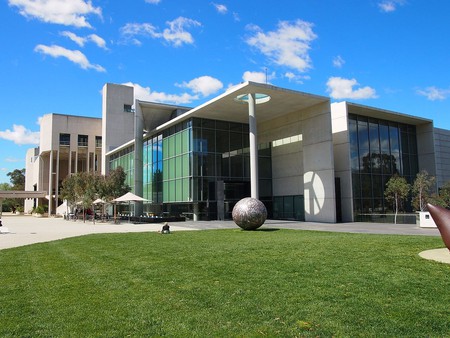