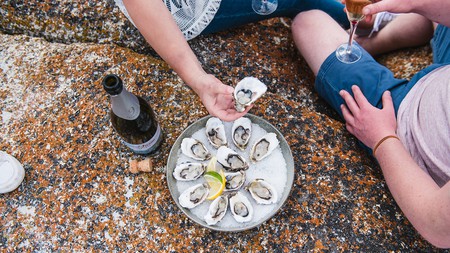 For lovers of seafood, Tasmania is pretty much as good as it gets. Australia’s southern island state boasts some of the world’s cleanest air, unspoiled ocean and fresh waterways, and it is here that visitors can indulge in fresher-than-fresh seafood – from saltwater fish such as bluefin tuna to freshwater trout, rock lobster, abalone and that favourite of legendary 18th century Venetian lover Giacomo Casanova – oysters.

Some of the world’s best seafood comes from the cold, clean waters of Tasmania, so oyster lovers will feel like they’ve landed in heaven when they slurp a fresh Tassie oyster. For visitors to Australia’s southern island state, experiencing the quality and freshness of its plump, creamy Pacific oysters is becoming as iconic as the island destination itself.

While restaurants and cafés in cities and towns across the state serve bounty from the sea, going to the source takes visitors to some of the most sublime destinations Tasmania has to offer, including oyster farms growing oysters renowned for their delightful silky texture, shucked straight from the sea. 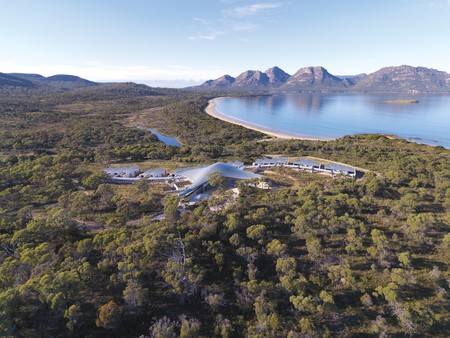 Saffire Freycinet looks across Coles Bay, the gateway to the Freycinet National Park, and the Hazards Mountains | Image Courtesy of Saffire

Piles of ancient shells, called middens, can be found in sand dunes and coastal foreshores around Tasmania, evidence that Aboriginal people enjoyed oysters for thousands of years.

Tasmanian Aboriginals feasted on Angasi oysters, also known as the native flat oyster, in the indescribably beautiful coastal regions of this largely unspoiled corner of the world.

Endemic to southern Australia, Angasi oysters were so popular with European colonists in the mid-1800s they were exported to other Australian colonies and also pickled and exported to New Zealand and Britain.

With no thought for the future, settlers harvested Angasi oyster beds extensively, using metal dredges that took everything in their path. As a consequence, the oyster beloved by untold generations of Aboriginals had almost vanished by the turn of the 20th century. 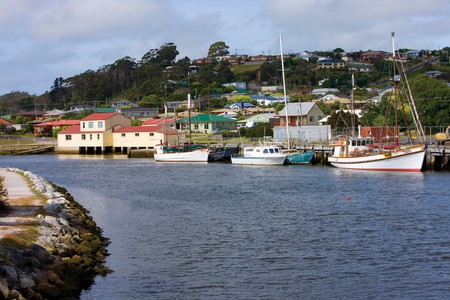 Smithton has some of the highest rainfall in Tasmania, providing pure, nutrient-rich water perfect for oysters. | © Kraig Carlstrom / Tourism Tasmania

These days the Pacific oyster, introduced in the late 1940s, reigns supreme in Tasmania, although Angasi oysters, a close cousin of the revered Belon oyster from France, have been saved from extinction and are now available for a few months every year.

The jury is still out on the age-old adage that oysters are aphrodisiacs, but they are nevertheless incredibly good for you. Not only are they super low in calories, they are a powerhouse of nutrients, including zinc, copper, vitamin C, vitamin B12 and lean protein.

Sampling Tasmania’s finest oysters at the source also means exploring some of the most spectacular landscapes on the planet – from Wineglass Bay on the Freycinet Peninsula, continuously ranked one of the world’s top ten beaches; to Bruny Island, blessed with a unspoiled natural environments and from rugged coastlines, sandy beaches and lagoons to the Gondwanan Rainforest.

It says something about Tasmania’s remoteness and sparse population (just over 500,000 people live on the island) that Barilla Bay Oyster Farm is just a few minutes’ drive from Hobart International Airport, making it an ideal first (and last) port of call on any Tassie oyster odyssey. 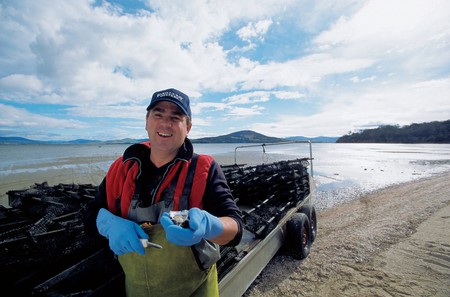 The oyster farm at Barilla Bay was chosen for its water quality, total tidal water replacement and proximity to the airport | © Nick Osbourne / Tourism Tasmania

Barilla Bay’s classy restaurant, overlooking Pittwater marine reserve, focuses on fresh, local produce; try one (or all) of the toppings on their deliciously silky just-shucked oysters. The seafood chowder, too, is to die for. Later, take an oyster farm tour.

From Hobart it’s 30 kilometres (20miles) south to the seaside town of Kettering. Board a car ferry for the 20-minute crossing across the D’Entrecasteaux Channel to Bruny Island, a captivating 363 square kilometres (140 square miles) of long, deserted beaches, silent forests, towering cliffs and prolific wildlife. 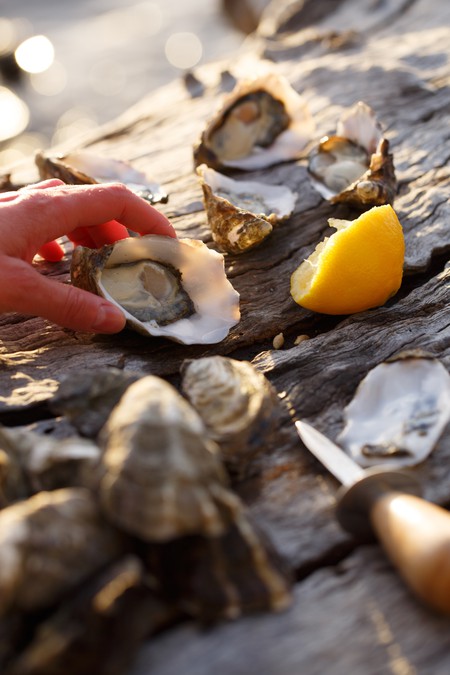 A long weekend on Bruny Island is total immersion into the best of Tasmania’s food, wildlife and scenery | © Tourism Australia / Samuel Shelley

Get Shucked, a locally owned and operated oyster farm, is one of an array of fine food producers on the island. There’s a licensed bar adjoining the farm in which to dine on anything from oyster wontons, oyster pate, oysters Kilpatrick and oysters shucked at the table, washed down with fine Tassie wines, artisan beers and ciders.

“Eating a natural Melshell oyster is like French kissing a mermaid,” says a sign outside a vintage blue caravan at the Melshell Oyster Shack, an institution on the Dolphin Sands sand spit, about 10 miles (16 kilometres) from Swansea, which is about 83 miles (134 kilometres) northeast of Hobart. Operating since 1984, this family farm, overlooking Melshell’s oyster leases on the Swan River, is an ideal place to learn about oyster farming on an oyster-lovers tour. 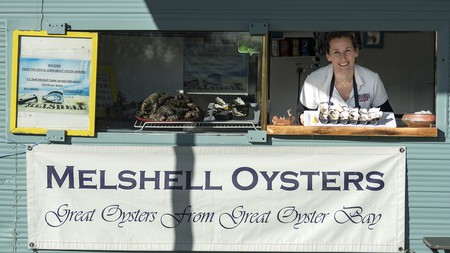 Hosted by owner and oyster farmer Cassie Melrose, the tour, which costs AU$80 (£41) per person explores the traditional production techniques used to grow Melshell Oysters. Learn how to shuck an oyster and taste the freshest oysters imaginable.

The small town of Coles Bay is the gateway to the park, and some of the most impressive accommodation options on the island, including five-star Saffire Freycinet, which has a bevy of accolades including the world’s best boutique hotel, and more modest but no less sensational Freycinet Lodge.

Coles Bay, on the shores of Great Oyster Bay, is also home of Freycinet Marine Farm. Dine in or take away freshly harvested oysters grown in the bay’s clean waters, and indulge in the likes of local mussels, lobster, abalone, scallops and sea urchin. 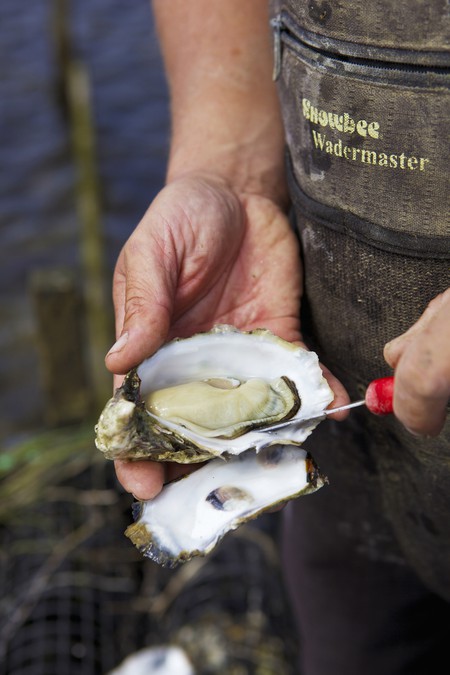 It doesn’t get any fresher than eating oysters right at the source: don some waders, step into the transparent waters at Freycinet Marine Farm, harvest oysters straight from the rack, shuck and slurp and wash them down with Tassie wine. A two-hour tour starts at AUD$95 (£49) per person. A similarly memorable experience is also offered for Saffire Freycinet guests.

The north-western tip of Tasmania on the Cape Grim peninsula, 376km (233mi) northwest of Freycinet is home to the cleanest air in the world. The Cape Grim Air Pollution Station, where the nearest landmasses are New Zealand to the east and Antarctica to the south, has been sampling air straight from the Southern Ocean for 40 years.

Fifty kilometres (30mi) southwest of Cape Grim is Smithton, where around 4,000 lucky residents breathe the cleanest air on the planet.

Smithton has some of the highest rainfall in Tasmania, providing pure, nutrient-rich water for Tarkine Fresh Oysters growing in adjoining Duck Bay.

Revered by oyster lovers for their sweet, white flesh and creamy texture, Tarkine Fresh Oysters are served just shucked at the farm’s on-site café either au naturel or with toppings, from traditional Kilpatrick to “Rocky Point” topped with sour cream, lemon, cheese and garlic breadcrumbs.

In Tasmania a few growers including Oyster Province are bringing native Angasi oysters back from the brink. Oyster Province oysters are grown in the pure waters surrounding uninhabited Dart Island, 86km (53mi) southeast of Hobart.

Available from May until the end of October, this is a “stunning little oyster, unique in their flavour,” says owner Steve Leslie. “They have a different taste to Pacific oysters; they’re more robust, with an earthy seaweed flavour. Angasi oysters cook well; they’re wonderful in a carpetbag steak.”