Sea of Plastic: An Artist’s Quest To Address Ocean Pollution 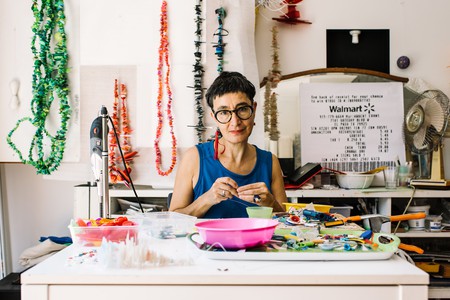 A product of their socio-political context, artists have long used their work as social commentary. As issues of sustainability and climate change make their way to the forefront of international debates, they are using their art to join in the discussion. Culture Trip meets an artist with an innovative approach.

When Sydney-based artist Rox De Luca started collecting debris from the shores of local beaches, she couldn’t have predicted that these pieces of discarded plastic would go on to form the basis of her artworks for years to come. But what initially started as a responsible exercise gradually became a ritual. With each trip to Bondi Beach or Rose Bay, De Luca amassed kilos of plastic waste. Acting instinctively, she carried them home to clean and categorise them by colour, size and shape. It was in her studio that De Luca began transforming these long forgotten, ugly items into objects of beauty – rendered useful once more through their newfound purpose. 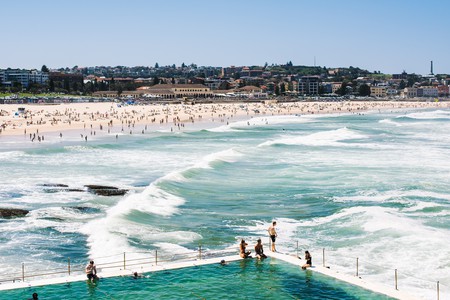 When Kurt Schwitters started making collages out of recycled paper and found objects in the 1920s, recycled art was born. From there, the concept evolved – from John Chamberlain’s metal ‘assemblages’ and Rosalie Gascoigne’s salvaged road signs to Lauren Berkowitz’s large-scale installations that featured thousands of used plastic bags. 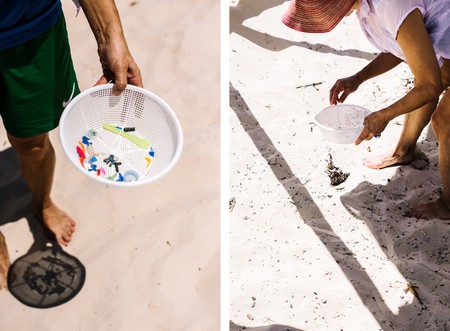 When artist Rox de Luca started collecting pieces of discarded plastic from the local beaches, she couldn’t have predicted that they would become the basis of her artworks | © Alana Dimou / Culture Trip

Now, as the dire consequences of mass production and consumerism come to light, artists are turning to an art practice that highlights the damage humans have inflicted on nature. Blending art and activism, ‘artivism’ or ‘ecovention art’ opens up a world of possibilities for artists interested in offering society more than just pretty pictures. 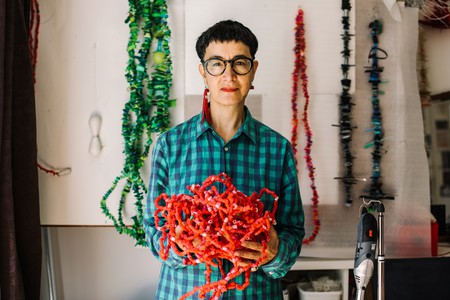 For De Luca, the transition into creating recycled art as a form of artivism was inevitable. Returning to her hometown of Sydney in 2010 after three years living in Madrid, De Luca found herself yearning for the “staggering beauty of the cliffs and the eastern coastline”.

De Luca can pinpoint the moment she knew she wanted her art to be part of the climate change solution. “I was at the beach a lot, on the sand, thinking, ‘Isn’t this gorgeous?’” she says. “Then I started looking closer and noticed all the rubbish. It was a really natural thing for me to start picking up the bits of plastic.” 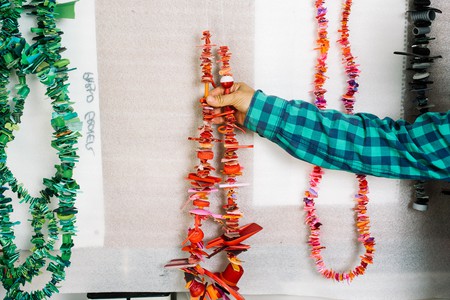 De Luca likes to unsettle her audience with her pieces, which reveal the effects of our throwaway culture on marine biodiversity | © Alana Dimou / Culture Trip

A major trigger for De Luca was attending a talk given by Dr Jennifer Lavers (of Adrift Lab). “I was totally saddened and compelled by her work as a research scientist and the effects of plastic on marine life. It’s a serious global crisis. The damage is heartbreaking and disturbing, and things need to change. We have a throwaway culture, we want what’s easy, what’s fast, what’s convenient.”

From a young age, De Luca was made aware of the importance of a sustainable lifestyle, as modelled by her parents. “They came from Italy, and made do with things; recycling and composting. I am the third of four girls, and my mother used to make our clothes. There was always that kind of sensibility of using what you had and using it as much as you could.” This mentality went hand in hand with her interest in art, nurtured from an early age, and resulting in a Bachelor of Visual Arts at the Canberra School of Art, ANU. “I went straight from high school, and was fairly young and naïve looking back,” De Luca laughs. “It certainly took me into the creative life journey that I’ve been on ever since, which is pretty remarkable. It’s not always been easy, but I’ve kept at it.” 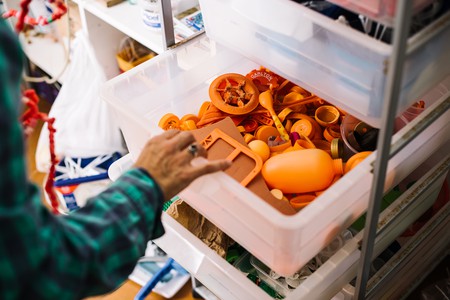 While combing the beach, De Luca has been able to collect kilograms of plastic waste, which she carries back to her studio to clean and categorise by colour, size and shape | © Alana Dimou / Culture Trip

From hunting for plastics on the coastline to sorting, arranging and, eventually, constructing the sculptures, De Luca’s process is meditative and meticulous. “It can be a slow process,” she says. “The range of materials will vary too – fragments of bigger things like toys or takeaway containers, cutlery, plastic bottles. Before I used plastic I painted and worked on recycled aluminium printing plates, so I’ve always been interested in using what’s around.” Applying a technique similar to jewellery making, De Luca drills a hole into each piece and uses wire to string them together. 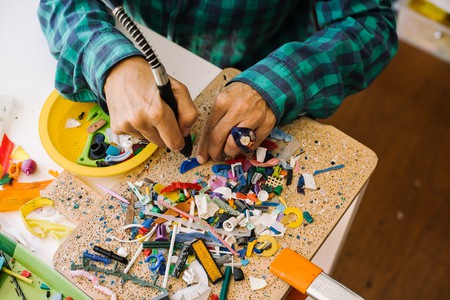 The artist uses a technique similar to jewellery making and drills a hole into each one of the fragment, arranging them according to size and colour | © Alana Dimou / Culture Trip

For De Luca, the conceptual and aesthetic elements in her work sit side by side, each as vital as the other. “Fundamentally, I like to make objects that are beautiful, but my work has always had this dark underpinning,” she says. “[Other artists] might make the message more didactic, but I like the idea of working with the poetry of the material. Sometimes people look at my work from a distance and say, ‘Is it coral?’ And when they realise it’s plastic, they’re in shock. But the response is after the initial awe of the decorative aspect. I like that paradox, because paradoxes are unsettling, and it’s important to unsettle an audience, because that might actually prompt change.”

In it together – inspiring, informing and involving the community

Throughout the years on her walks along the coastline, De Luca has come across helpers keen to assist her. “People pick things up with me,” she says. “Others say, ‘Actually I pick up plastic and I should give you some!’ It shows that people really care and are thinking about taking action.” 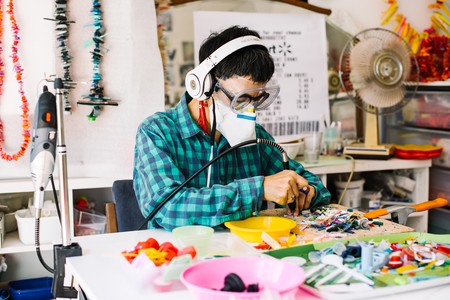 De Luca’s process is slow, meditative and meticulous, producing objects that are beautiful, but have a dark underpinning, which the artist believes is how change is effected | © Alana Dimou / Culture Trip

In 2013 and 2016 De Luca was commissioned to make site-specific artworks for the open-air exhibition Sculpture By The Sea, displayed at Bondi Beach. “It was a wonderful way of presenting work to all kinds of people, some who wouldn’t necessarily go into a gallery,” she says. “I think it stops people in their tracks because they realise that we collectively are responsible for what’s left behind.”

In addition to solo and group exhibitions, De Luca was recognised as a finalist in the Ravenswood Australian Women’s Art Prize in 2017 and 2019, the Deakin University Gallery Contemporary Small Sculpture Award in 2018 and 2019 and The Fisher’s Ghost Art Award in 2016, 2017 and 2018. 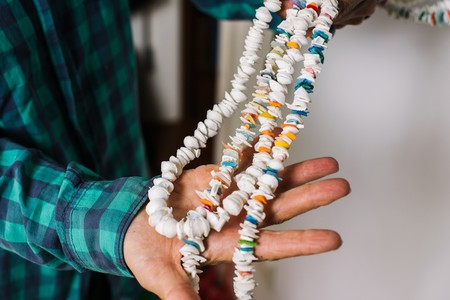 De Luca was commissioned to create artwork for Sculptures by the Sea, an open-air exhibition displayed on Bondi Beach, her hunting ground for plastic pieces | © Alana Dimou / Culture Trip

In 2019, De Luca participated in the festival Art+Climate=Change. “It’s good to be part of the bigger conversation,” she says of the experience. “What I’m seeing more and more is the art sector trying to promote learning and information – finding interesting ways to communicate and create dialogue. Promoting opportunities for engagement beyond the gallery context.”

From the outside, it appears that Sydney and its residents are taking positive steps towards becoming a more sustainable city, but De Luca is unsure. “It’s varied,” she sighs. “It’s an educational thing, and a generational thing, but there are people out there who are concerned. On one hand, I see people with keep-cups and it makes me so happy, but then I see a lot of others buying plastic water bottles, which is crazy. So, we’ve still got a long way to go.” 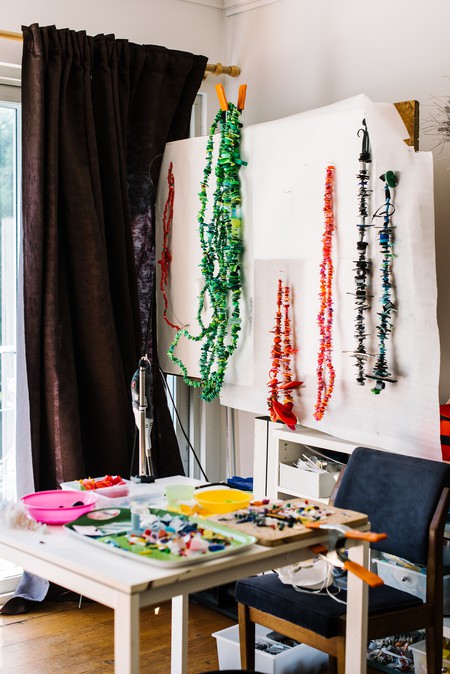 In its Sustainable Sydney 2030 plan, the City of Sydney promised to ‘reduce carbon emissions, with a network of green infrastructure to reduce energy, water and waste demands’. And in her statement accompanying the Environmental Action plan in 2017, Sydney Lord Mayor Clover Moore specified, “Targets for 50 percent renewables by 2030, 70 percent reduction in 2006 greenhouse gas emissions levels by 2030 and net zero emissions by 2050.” Whether or not these objectives will be realised in time is still uncertain.

In June 2019, a report by the Sustainable Development Solutions Network ranked Australia 38th out of 162 countries in terms of sustainability. The report noted that Australia obtained its worst results in ‘Responsible Consumption and Production’ and ‘Climate Action’, adding that to be on track to reach the target set by the United Nations for 2030, monumental changes would need to be made to lower CO2 emissions, overall pollution and threats to biodiversity. 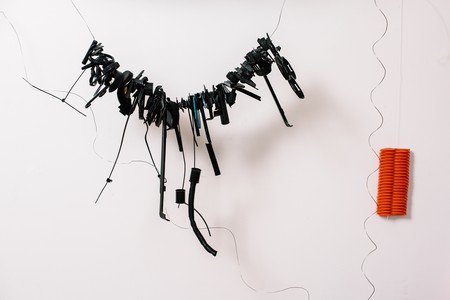 So where to from here? “We have to collectivise,” De Luca says. “We are lucky we’ve got such pristine natural environments in Australia, but we’re seeing so much devastation at the moment with the bushfires and extreme heat. So we have to put pressure on local and state governments. Now’s the time to try and reverse the damage. Quickly.”