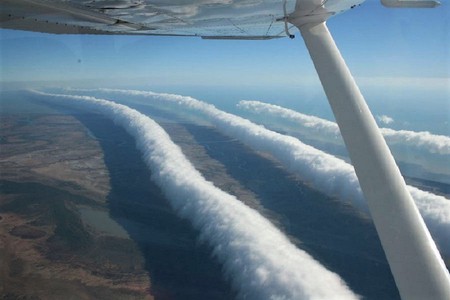 Modern Homo sapiens have been around for approximately 200,000 years, and modern civilization dates back 6,000 years. In this time, we have learned and accomplished an enormous amount; however, the world is still filled with mysteries. From earthquake lights to sailing stones, countless natural phenomena defy explanation or understanding. One such occurrence is the Morning Glory cloud.

A rare meteorological phenomenon, the Morning Glory cloud is not thoroughly understood but is believed to be the result of a collision between a humid easterly front from the Coral Sea and a warm westerly front from the Gulf of Carpentaria. At night, the air over Cape York cools and slides beneath a layer of warm air, leading to the spectacle. The low-level atmospheric waves “are usually about 1–2 km in height and can span up to 1,000 km in length,” said Bureau of Meteorology Forecaster Andrew Bufalino. They can also appear as one solitary cloud or as up to 10 consecutive roll clouds.

Morning Glory cloud formations take the shape of a pipeline and move across the sky at speeds of up to 40 kilometers per hour, most commonly from a north-easterly direction.

They are also popular with pilots who surf the clouds. “There are fewer people who have flown on the Morning Glory than have climbed Mount Everest,” said Garrett Russell of the Caboolture Gliding Club. According to this article, pilots gather in the Burketown Pub to observe condensation on pints. They also examine the upward curling of coffee table corners. These tell-tale signs illustrate that the phenomenon is on its way. “If they are really obscured by condensation, the humidity is high and the pilots will finish their beer and go home for an early night, ready to get up before dawn to ride the cloud,” said Russell. Tourists are also welcome to glide through the clouds with companies such as Savannah Aviation. The company says it offers “the very best views of the Morning Glory Clouds.” 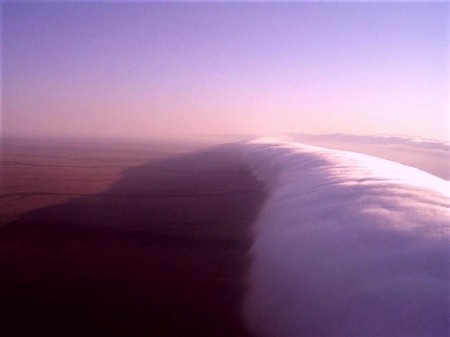 This eerie weather event occurs at dawn over the southern part of the Gulf of Carpentaria in Northern Australia and can be observed from a remote settlement called Burketown, Queensland between September and November, if and when the conditions are right. Similar phenomena have been reported in the United States, Canada, the English Channel, Germany, Brazil, and in Eastern Russia, but the Morning Glory cloud is seldom seen anywhere other than Northern Australia.

Long before pilots took to the skies, local Garawa Aboriginal people noticed the regularity of the formation. They refer to the unusual clouds as kangólgi and believe that the arrival of Morning Glory is a positive prediction of a flourishing bird population.

Regardless of the explanation, the Morning Glory cloud is yet another reason why Australia is considered one of the most extraordinary continents on this planet.