The Most Interesting Food & Drink Finds In Melbourne

With so many cuisines and food groups represented across thousands of restaurants in Melbourne, it’s no wonder why this city is known as the food capital of Australia. Some of the best chefs in the world have set up shop here, as have some of the most experimental culinary wizards. Gastronomic geniuses are constantly pushing boundaries and serving up innovative dishes and dining experiences. These ideas are some of the latest novelties to emerge in the Melbourne scene.

Cafe, Coffee, Healthy
Too Many Chiefs, Brighton | Courtesy of Too Many Chiefs
From the coffee shop that brought us the beetroot and golden turmeric latte comes its rainbow cousin, and yes, it’s just as fantastic as it sounds. Created with blue, red, and green food dye, this latest creation by Too Many Chiefs in Brighton was inspired by Las Vegas barista Mason Salisbury. The rainbow latte is an Instagram-worthy pick me up palette of colours that tastes like regular coffee but looks like cosmic tie-dye. If you’re looking for a flu-fighting, vitamin C hit then Too Many Chiefs claim that their beetroot, turmeric and matcha lattes will do just that.
More Info
Open In Google Maps
305 Bay Street, Brighton, Victoria, 3186, Australia
+61395969587
View menu
Visit website
Visit Facebook page
Send an Email
Give us feedback

Pizza In A Cone

We all love pizza, but eating your favourite slice can be an awkward experience, with stringy cheese hanging off the side and toppings that never stay in place. Thankfully, there’s a solution to this epidemic and it comes in the form of Pizza in a Cone. Established in 2002 by culinary Chef Rossano Boscolo, KonoPizza is a modern-day riff on the classic Italian calzone, made for people on the move. Located in South Yarra, there are six savoury flavours to choose from including Kono Brekky, Vegetarian, and Margherita as well as two sweet options, chocolate and s’mores. 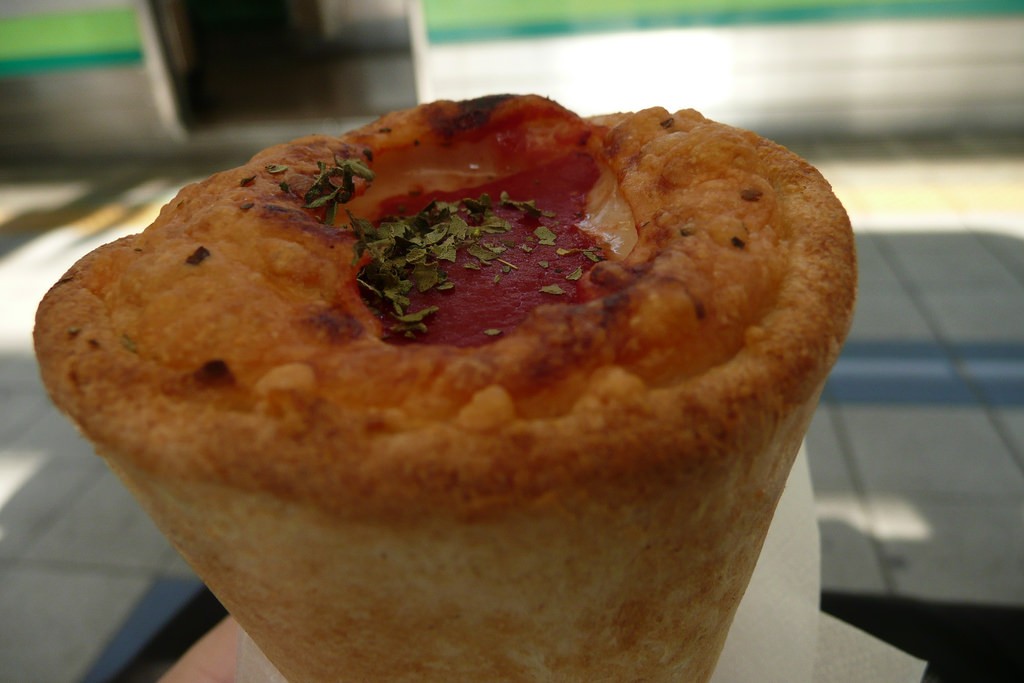 Taking inspiration from the film ‘Cloudy With a Chance of Meatballs‘ is Melbourne’s first float-down ‘parachute’ restaurant where Jaffles, toasted sandwiches, literally fall from the sky. Creators Adam, David and Huw take orders via PayPal and once you select a time they’ll designate a mystery drop-off zone. Once you arrive, it’s time to look up to the heavens and wait for you order to fall in your lap. We know this sounds totally made up, but believe us, it isn’t. Visit the Jafflechute Twitter page for upcoming event info.

Australians love vegemite and seafood, but the two don’t usually come together. Enter The Shaw Davey Slum in Carlton, where fried calamari rings are coated with dehydrated vegemite salt and served with vegemite mayonnaise alongside salad and fries. Admit it, you’re curious.

Some people like buttermilk pancakes or blueberry pancakes, Jack Johnson has even sung about banana pancakes, but in Sassafras the entire pancake menu at Flippin’ Pancakes will raise a few eyebrows whilst tantalising your tastebuds at the same time. By far their most surprising crepe creation is the Mexican beef which includes spicy tomato sauce, sour cream, spring onion and iceberg lettuce. You’ll never look at a pancake that same way after this.

Beachfront institution Café Lafayette is known for its Asian fusion menu and fresh shakes, but since May another dessert has taken centre stage. Inspired by the shingen mochi hybrid dessert by New York chef Darren Wong, the Raindrop Cake is essentially an elegant blob of jelly next to a pile soybean powder. Sure, it sort of looks like a breast implant but the dessert contains virtually no calories thanks to the combination of spring water and agave. You can choose between matcha and pistachio, pink rose and almond or brown sugar.