Melbourne’s neon heritage is glowing red with history, and the signs that illuminate our skyline have become fixtures in the texture of our city. From simple brand advertisements to complex animated sequences, vertical fins and skipping girls, Melbourne was once brightly lit, and although our streets shine a little less these days, we can’t forget the neon icons of Melbourne.

Designed by Whiteway Neon, the Slade Knitwear sign in Richmond was used to advertise the factory below. The 31-metre-long sign features cursive orange metal-trough letters and red neon, making it one of the biggest and most highly visible signs in Melbourne. In 2001, there were plans to remove the sign. However, public support helped grant Slade a Victorian Heritage Register listing. The sign was lit until 2001 but is no longer illuminated. 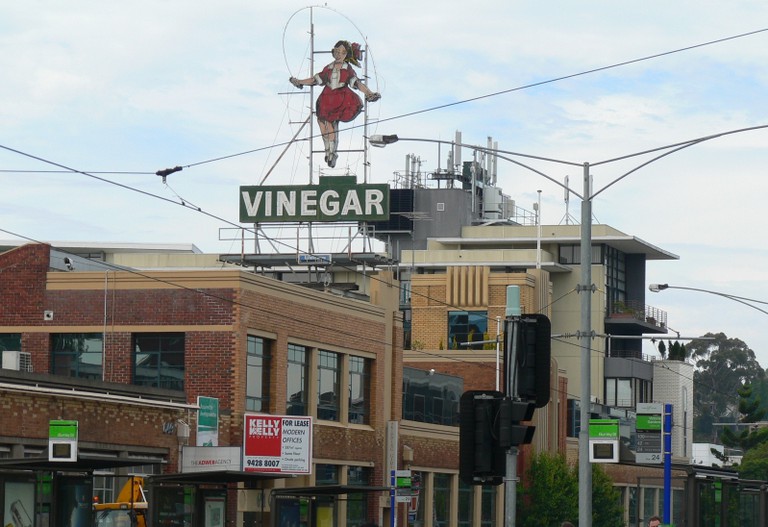 Little Audrey first skipped into the hearts of Melbournians back in 1936 when she became the icon for vinegar brewery Nycander & Co and was used to promote their Skipping Girl vinegar. Designed by Jim Minogue, who also designed the Nylex Clock, the sign was located at 627 Victoria Street, Abbotsford. The model for Australia’s first animated sequence sign is 94-year-old Irene Barron, who remembers skipping for hours to help designers get the rope movement right. In 1969, the factory was demolished, and the sign was sold to a used car dealership. This led to public outrage which saw a second sign made in the 1970s, and this sign now hangs at 651 Victoria Street, Abbotsford.
Open In Google Maps
Abbotsford, Australia
Give us feedback

The Apex Belting sign was Melbourne’s oldest continuously operating neon sign. Built for a conveyor belt company in 1942, the sign is made up of a blue background and eleven neon letters, four of which are red and seven of which are green. Surrounding the sign are clear incandescent chaser bulbs. In 2002, the sign was restored after funding from Apex-Fenner, but in recent times, the sign has stopped lighting up and is no longer functional.

Built on top of a factory located on a hill, the Pelaco sign overlooks Richmond and the surrounding suburbs. The six mammoth metal-trough letters were erected in 1939 for the Pelaco shirt factory, but when the business left Richmond, the sign fell into disrepair and years of ownership disputes followed. The sign was restored in 1997 and was briefly illuminated but is no longer lit. The sign is listed under the Victorian Heritage Register and classified by the National Trust. 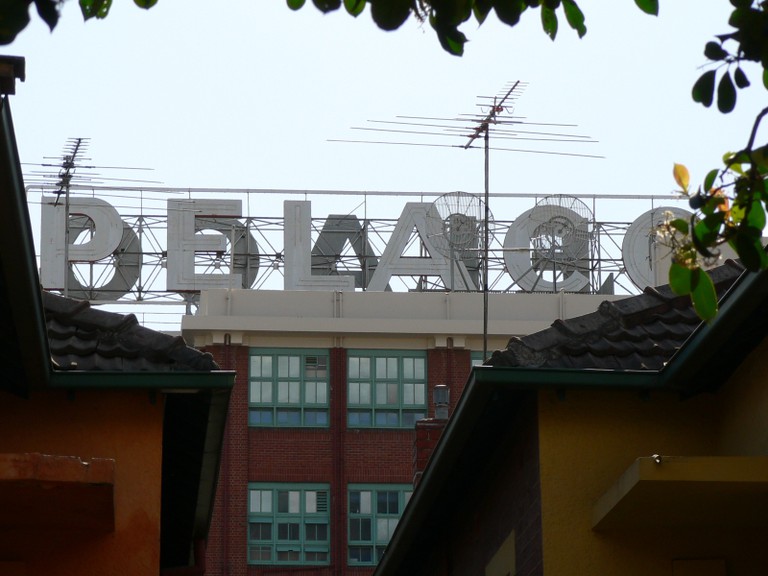 Designed and built by the company Neon Electric Signs in 1961, the Nylex Clock provided Melbournians with the time and temperature for many years. Located in Cremorne, on top of a malting storage silo, the sign reads ‘Nylex Plastics’ and can be seen from freeways and the MCG and has become such an icon of Melbourne that it even featured in Paul Kelly’s music video for ‘Leaps and Bounds’. In March 2004, the sign was granted a Victorian Heritage Register listing, and in February 2005, it underwent a major restoration with 17,000 LED lights, 800 metres of neon tubing and two kilometres of electrical cable replaced. In December 2007, the sign was switched off when Nylex went into receivership, and although the clock briefly turned back on in 2015, there are no current plans to switch this icon on permanently. 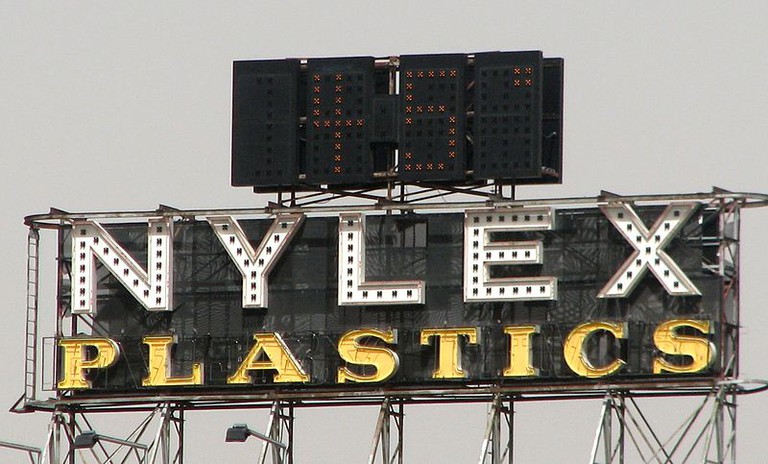 Building
Facebook
Email
Twitter
Pinterest
Copy link
Share
Map View
Sometime in the 1930s, the Herald Sun Sign was assembled above The Herald and Weekly Times premises. The sign includes nine, two-metre-high metal-trough letters that each contain white neon. In 2005, the publishers left their Flinders Street location, and the building was converted into apartments. During the relocation and restoration, several letters were stolen, and new letters had to be created so that the sign could continue to operate, and it is often illuminated.
Open In Google Maps
Melbourne, Australia
Give us feedback

Building
Facebook
Email
Twitter
Pinterest
Copy link
Share
Map View
Neighbouring the Nylex Clock on the silos is the Victorian Bitter sign. It was designed by Claude Neon and added to the building in 1970 before undergoing remodelling on two occasions in the 1980s. The sign features a green board with white metal-trough letters lit in green neon and a backlit acrylic light board on the left which displays a picture of a Victoria Bitter using 85 fluorescent tubes. In October 2011, the sign was recommissioned by Carlton and United Breweries and is still lit each night. There are currently plans underway to nominate the sign of inclusion on the Victorian Heritage Register.
Open In Google Maps
Richmond, Australia
Give us feedback

Opened in March 1929, the Regent Theatre was the second largest theatre in Victoria, but in 1945, a fire destroyed the property, and it wasn’t until December 1947 that a new, reconstructed theatre opened with a neon sign. Sadly, the theatre fell into disrepair for 26 years, and it wasn’t until 1996 that it reopened with a new sign. The vertical fin features a green crown and red neon letters and is similar in appearance to the sign at Her Majesty’s Theatre. The sign is still operational and regularly lit.

When Elizabeth II became the Queen of Australia in 1952, the name His Majesty’s Theatre was changed to Her Majesty’s Theatre, which explains why the original sign from the late 1930s was replaced or modified. The 1952 version is still perched on the side of the theatre and features a crown as well as blue and red neon lettering. The vertical fin-styled sign is still working and can be seen lit up at night. 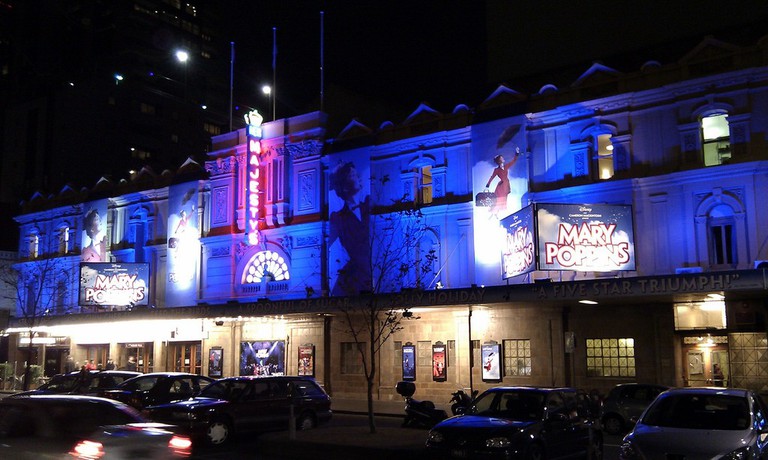 One of Melbourne’s most extravagant signs was the Allen’s Sweets green and red neon sign which measured 30 metres wide and 12 metres high. The original 1955 sign was fairly simple, although the scaffolding had been intended for a Holden car advertisement. In 1969, Claude Neon designed a 35-second sequence featuring the words ‘Allen’s Sweets’, ‘Cool Cool Kool Mints’ and ‘Anticol Cough Drops’. The sequence also incorporated neon fireworks, raindrops and lollies falling from an Anticol packet. When A.W. Allen Ltd relocated, the original factory was demolished to make way for Southbank, and the sign was torn down.