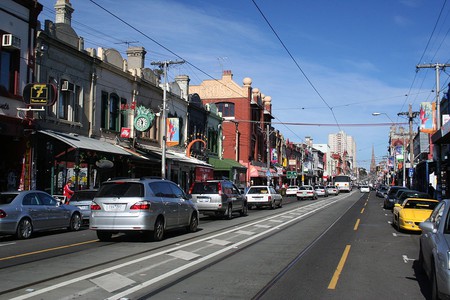 Just two kilometres from the CBD, Fitzroy became Melbourne’s first suburb in 1839 when the land between Alexandra Parade and Melbourne was subdivided. Surrounded by factories, Fitzroy was occupied by working men; however, by 1939, residents relocated, making room for scores of Italian and Greek immigrants to move in. Since then, the suburb has taken on both a bohemian and multicultural identity with Chinese, Vietnamese, African and Hispanic communities. Today, Fitzroy has a thriving arts scene where hipsters can be found Instagramming walls shrouded in street art, and there are cafés, restaurants and bars scattered down Brunswick Street. Visit historical sites such as Captain Cook’s Cottage, browse galleries and relax with rooftop views.

Fitzroy is a bustling, cultural mecca, and there is always something unique to see and do. For relaxation, we recommend visiting the Victorian-era Fitzroy Gardens which are set across 64 acres and encompass an ornamental lake, scarred tree, conservatory, Fairies Tree, band pavilion, visitor’s centre, café and the historically charming Cook’s Cottage. Those who prefer something more modern should visit George Street where you’ll find one of Melbourne’s premiere photo-based arts spaces, The Centre for Contemporary Photography, which features five exhibition galleries showcasing the work of emerging and established photographic artists. If you’re visiting Fitzroy on Saturday or Sunday, then don’t miss The Rose St. Artists’ Market, which has been blooming to life every weekend since 2003 with stalls from up to 70 emerging and established artists and designers showcasing all things handmade. 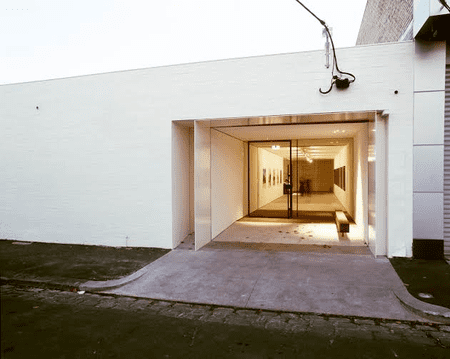 Fitzroy is dotted with dining options no matter your taste or dietary needs. Vegetarians, vegans and even Jared Leto are drawn to infamous Vegie Bar, while Sonido! is quite possibly the best Latin restaurant in Melbourne, serving up breakfast and lunch with a side of kitsch and its very own exhibition space, Chiquitica. George Calombaris’s Jimmy Grants puts a refined spin on souvlaki, while Bimbo Deluxe flips four-dollar pizzas. Stand in line for a lemon curd Cruffin at Lune Croissanterie, or opt for the ultimate in Fitzroy fine dining at Cutler & Co, which is often named amongst Australia’s top restaurants. 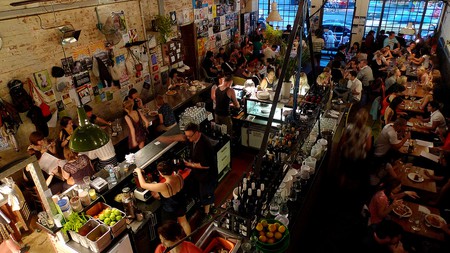 From casual cocktail bars to dive bars, Fitzroy is a nightlife magnet where you can choose to sip your poison of choice in a dark corner or dance the night away. Head to The Black Pearl for a sophisticated sip, or wander into the eccentric Kommune bar for a night underneath the overhanging umbrellas. Step through the yellow door into Hell of the North, pick your potion at The Alchemist Bar & Café, and for one of the best views of Melbourne, head to Naked for Satan where hipsters hang out on the rooftop eating baked camembert with a glass of gin in hand. 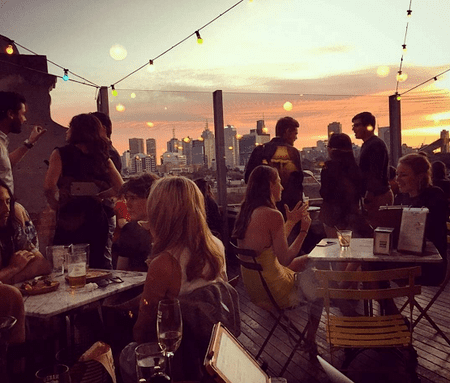 Naked in the Sky | Courtesy of @sezzhosseini

If you’re after a freshly brewed cup of coffee in Fitzroy, there are a few names you need to know. The first is Industry Beans, which serves up espresso, pour over, cold drip and AeroPress in a warehouse conversion, and with new flavour selections every fortnight, there is always a new brew to pick you up in the morning. The second must-visit café is Atomica, which has been serving unpretentious single-origin and coffee blends since 1996. The third choice is the new kid on the block, Sir Charles, which offers black coffee alongside an Asian-inspired menu. 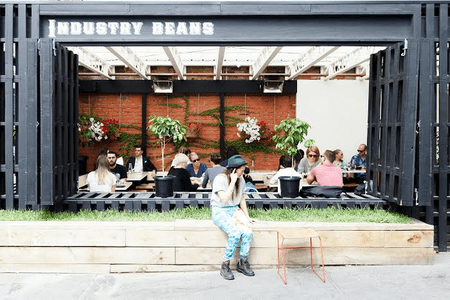