Melbourne street artist Kaff-eine is best known for her colorful public pieces, but her latest project is a little different. It saw her travel to the Philippines to work with people in the country’s poorest communities to create works of art. These collaborations will be on display at her upcoming Phoenix exhibition and will raise money for two non-government organizations working in the communities. The Culture Trip met with Kaff to find out more about the project. 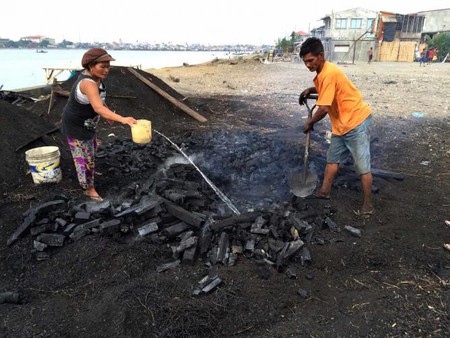 Kaff-eine at the Baseco charcoal pit | Courtesy of Articulate PR

Kaff-eine’s street art career began, uniquely, while she was working for the government.

Now a full-time artist, she has had a wide range of careers, but she was working in public policy when some new friends, who were street artists themselves, introduced her to the art form.

‘I got into it, and it was different. You’re not working for clients or for money, you’re doing it for you. I thought that was really awesome,’ she said. ‘You can draw what you want, so I’d go around at night and paint some pieces, then I’d go to work during the day, then go out at night, and that continued for a couple of years.’

Her gorgeous, melancholic, aerosol artworks quickly gained attention, and commissions came in from around the world. The extra work made it difficult to maintain a 40-hour office work week.

“I loved the challenge of it, but it just wasn’t as exciting as the artworks felt to me, so I sold my house and quit my job, and I’ve been doing this full time ever since… It’s a big shift from what I thought I’d be doing.’ 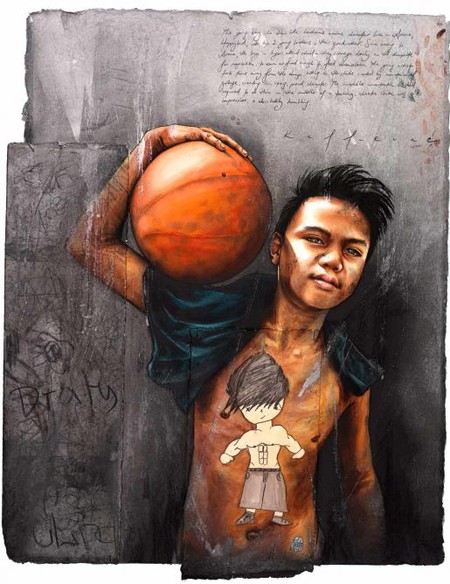 Kaff’s life shifted again after she went to the Philippines with a friend in 2013. Her friend was volunteering at a children’s shelter, and Kaff started painting the shelter’s wall. The project quickly became a collaboration.

‘People aren’t shy to come up and go, “can I paint something?” The wall I was painting was a nice long wall, and I thought, “Why not? Art’s not precious. Anyone can do it.” So I said to them, okay, let’s do an outline of a drawing, and then we’ll color it in.’

Her experiences in the Philippines gave Kaff an idea. She started researching and found a couple of very poor communities in Manila and a couple of reputable, non-government organizations that could help her. An exhibition in Melbourne raised money to fund Kaff’s plans, and she returned to Manila in March. Kaff met with people from two locally respected organizations, and, through sheer luck, found out they worked in the exact communities she wanted to create art in.

One community was the charcoal-makers in Baseco Compound, a slum located right next to one of Manila’s richest areas. Its residents live on top of the sea wall designed to protect the city from tsunamis and typhoons, and the ground under their feet is reclaimed land, made from compacted garbage.

‘They live in really tenuous conditions, and they work all day, seven days a week, to try and earn enough money to feed their families. The kids go around and either support the charcoal or they’ll collect wood and grass to make charcoal, or they sell charcoal.

‘A lot of kids in the communities need to work to support their families as well. So it’s a pretty full-on existence.’ 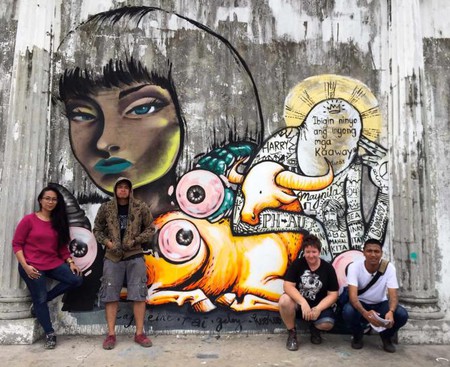 The other community was the garbage pickers in Happyland, who live and work on a dump site, finding materials to sell and food to eat in the bags dumped by hundreds of trucks.

‘We’d get there early in the morning, and these people would already be working, and we’d be there all day, and they’re still doing the same thing, just over and over and over.’

Kaff brought paper to both communities and encouraged local children and adults to draw using the charcoal the communities usually make for electricity and cooking.

‘People living in these conditions are just like us in some ways, but they’ve also got these exceptional stories behind them. Wouldn’t it be nice if people outside these communities could hear about what it’s like?’

The residents drew what they loved, what made them happy, and what they wanted to tell the world.

‘What came through in a lot of images was housing, secure housing, flood-proof housing with electricity, with beds, really simple things. A lot of the kids drew gardens, because they don’t get to see gardens.

‘School is something really large. If you don’t have money and you can’t afford to get clean and have clothes, you can’t go to school, and a lot of people really wanted to go to school.

‘There are some really beautiful images that have come out of it.’ 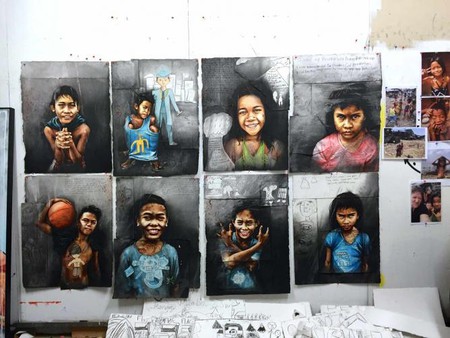 The completed artworks combine the charcoal drawings with watercolor portraits of some of the residents, drawn by Kaff. The important thing for her was that the project engaged the residents as equals.

‘It’s not charity, I’ve been very clear about that. This is not a charity, this is a collaboration.

‘Let’s just sit down together, where you live and work, and use the charcoal, and we’re going to make drawings. Then I’ll take them back [to Australia], have a nice exhibition, get some funds, treating them like artists – if you and I made a painting together, we would split the proceeds. Same with these guys.’

The exhibition, titled Phoenix, showcases the collaborations. There’s also a beautiful documentary about the communities made by Geloy Concepcion and Geric Cruz, two Filipino artists who also worked as Kaff’s translators. Both Concepcion and Cruz will be at the exhibition, opened by Julian Burnside AO QC. 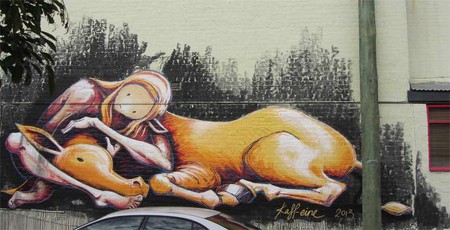 The money raised from Phoenix will be given to the organizations working in the collaborating communities. Bahay Tuluyan supports children’s rights, employs ex-street kids, and supplies food and classes, while Gawad Kalinga works to improve the slum areas and provide more secure housing.

Kaff will return to the communities in 2016 for a new project. She will work with the residents to paint portraits of local heroes on huge advertising tarps which can be used as housing.

‘I’m not going to change the world doing this, and I’m not going to save all these people. That’s not what I’m trying to do. But what I can do is, I can paint, and I can go in and genuinely collaborate, and hopefully what that’s going to do is open up a lot of people’s eyes and start them thinking about what they can do to start investing in these communities.

‘Everyone can do something, right?’

The Phoenix exhibition launch is on November 6 at the James Makin Gallery in Collingwood. The exhibition will run until November 15.

Erin Leeder was born and raised in Melbourne. She has nearly completed a Bachelor of Journalism at La Trobe University, and plans to travel more once she graduates. Her interests include pop culture, history, fair trade, and the lighter side of life. You can find her on Twitter: @155erin