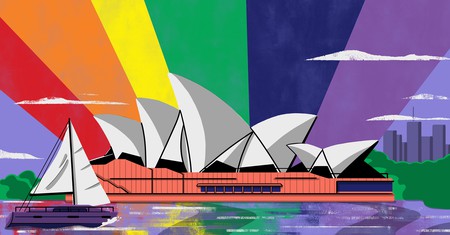 When Robyn Kennedy marched in Sydney’s first Mardi Gras parade in 1978, she didn’t realise she was laying the foundations for what would four decades later become one of the planet’s largest pride parades.

“We never imagined then that it would lead to what we have now,” says Robyn Kennedy, who spearheaded Sydney’s successful bid for WorldPride in 2023. “We were just trying to get those really basic rights achieved, so we didn’t have to face discrimination and oppression and violence.”

LGBTQ protests had been bubbling in Australia since New York’s Stonewall riots in 1969. But the night of 24 June 1978 was a tipping point in Sydney.

About 500 protesters gathered on Oxford Street to mark the ninth anniversary of Stonewall, but that number swelled to about 2,000 by nightfall – many in costume to preserve their anonymity in an era when homosexuality was a criminal offence.

After the group marched to a very limited playlist of gay anthems – Kennedy recalls Tom Robinson’s ‘Glad to be Gay’ and Meg Christian’s ‘Ode to a Gym Teacher’ being blared on repeat – the protest was brutally stopped by police, who arrested 53 people.

“We’d had various marches and demonstrations, but everything really changed on that night,” explains Kennedy, then a law student at the University of Sydney.

“Because the attacks on the people that were gathered were so violent and so systematic and so organised… and the fact that we fought back en masse. It was just that moment in time when we said enough is enough, and we just started pushing back against what was happening, pulling people out of the paddy wagons, having a tug of war with police to free people, because people were getting pretty badly beaten. Being thrown against walls, being dragged along by their hair, that sort of stuff.

“It was a really big milestone for us, and it really changed the way we felt about what we were doing. If anything, it spurred us on. I don’t think the Mardi Gras parade would’ve ever happened again if wasn’t for that night,” Kennedy says. 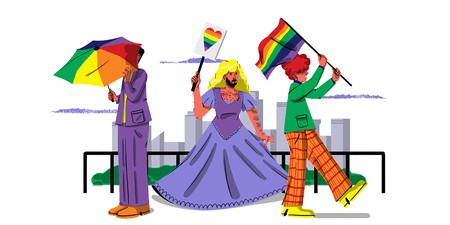 The early days of the Sydney Mardi Gras

The marchers returned 12 months later to commemorate the decade anniversary of Stonewall, and this time, no arrests were made. By 1980, the Mardi Gras shimmied into the Sydney summer where it’s remained ever since, painting Oxford Street in rainbows with a mammoth parade on the first Saturday of each March.

Because male same-sex sexual activity was only decriminalised in 1984, many early marchers donned wigs, make-up and costumes to mask their identity, but the dress-ups gave Sydney’s pride protest a particular party vibe. Kennedy remembers a time when she was forced to travel in large groups just to avoid violence on the street, which makes this public display of identity so crucial to Sydney’s queer community.

“It was really basic human rights we were fighting for,” says Kennedy, who later became a Mardi Gras board member and Sydney’s WorldPride committee chair.

“I knew a number of people who killed themselves because they just could not cope with society’s attitudes. Everywhere you looked, you were sick, you were evil, you were damned, you had a mental health problem. It was very difficult and people did internalise that oppression.

“And being on the street, I think that’s still really, really important. For me, Mardi Gras will always be important, that parade. Even though we’ve achieved a lot, there’s still a long way to go. And claiming your identity in that very public way with your community is very, very important for people. Especially people coming from a very conservative background or just starting to come out, it’s very validating for people.” 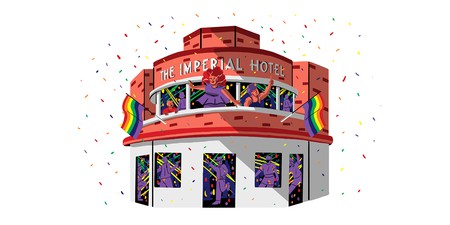 Erskineville’s Imperial Hotel is another LGBTQ institution that’s been running almost as long as the Mardi Gras. Purchased by Dawn O’Donnell – a legendary nightlife heavyweight who built an empire of queer clubs – in 1983, the Imperial was immortalised the moment Hugo Weaving strutted out on to the stage as drag queen Mitzi Del Bra in The Adventures of Priscilla, Queen of the Desert in 1994.

“Of course, Mardi Gras is probably one of the most exciting times of year for the venue,” says Matt Folino from The Imperial. “We get a lot of people coming into Australia, a lot of people that don’t really go out any more come out of the cracks, and we start to see the queer rainbow family come to life and visit the venue. For us next year, it’s looking amazing.”

Sydney – particularly suburbs like Erskineville and Newtown in the bohemian Inner West – plus queer capital Darlinghurst, is a haven for LGBTQ people looking for a like-minded community. Folino, for instance, grew up in conservative western Sydney before moving into the inner-city as soon as he turned 18.

“The moment you move to the city, you’re a dime a dozen, there’s a million queers here, and it’s awesome,” Folino says.

“Australians, especially inner-city Australians, are more open-minded to diversity, and with diversity comes acceptance and, ultimately, that’s what we’re all looking for.

“For most queer men growing up in smaller areas or smaller suburbs or quieter places, you get to realise that the big smoke is so full of different people – your own kind are there, as well. 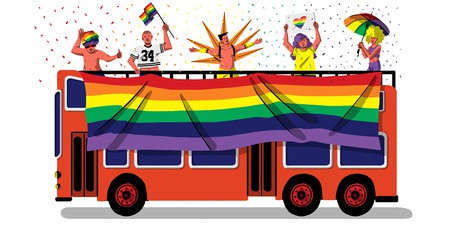 Mardi Gras will get even more fabulous in 2023 as Sydney prepares to host WorldPride – the first time this global celebration of the LGBTQ community has been held in the Southern Hemisphere. Bid chief Kennedy worked tirelessly to secure the support of hundreds of delegates from every corner of the globe, who gave Sydney the nod over Montreal at InterPride’s Annual General Meeting in Athens, Greece in October 2019.

“From licking stamps to standing up in front of 30,000 people at the Stonewall 50 rally, talking about our history as 78ers,” Kennedy says. “It’s just been an amazing journey and I’ve been so proud of it.”

Sydney’s bid hinged on two key selling points: the city’s track record of hosting a massive Mardi Gras for more than four decades, and taking WorldPride outside the Northern Hemisphere. This is the first time the event is being held outside of Europe or North America, presenting a unique opportunity to spotlight LGBTQ human rights abuses in the Asia-Pacific and the Global South.

Coinciding with the 45th anniversary of the inaugural Sydney Mardi Gras, WorldPride 2023 will run from 16 February to 4 March, combining a three-day human rights conference, opening and closing ceremonies and a special Bondi Beach party with the usual Mardi Gras parade and a jam-packed arts and culture programme at venues across the Harbour City.

Kennedy doesn’t expect as many people to attend Sydney’s WorldPride as New York’s in 2019 – 5 million people marked the 50th anniversary of Stonewall in the Big Apple, while the Harbour City will welcome around 1.5-2 million. But those visitors should certainly expect a more festive vibe down under in 2023.

“Our Mardi Gras parade is very different to pride marches around the world,” Kennedy explains.

“Pride marches around the world are more like a protest march – they’re held during the day, people don’t really dress up that much, there are placards and things. Our parade is quite unique because it’s curated and it’s at night and people spend months on their costumes and floats and it draws incredible crowds.

“People do feel elated being in the parade, and they feel elated watching it. You can imagine these young kids in a country town, and they watch it on TV… and how that makes you feel. You can see these people having a fantastic time and being cheered on by these enormous crowds, and that’s so validating.

“To be able to come to Sydney and find your community after feeling isolated your whole life, I think that is amazing,” Kennedy says.