Although born in the United States, Jessie Ackermann (1857-1951) became a key figure in Australia’s suffrage movement. The social reformer and feminist was appointed as president of the Australasian Woman’s Christian Temperance Union, published three books, and travelled extensively spreading her message on women’s rights throughout the world.

Jessie Ackermann was born in Frankfurt, Illinois on Independence Day 1857 to parents Charles and Amanda Ackermann. She grew up in Chicago before moving to California where she attended the University of California, Berkley in 1880. After failing to graduate, Ackermann began working as an organiser with Independent Order of Good Templars in 1881 before moving to the Woman’s Christian Temperance Union seven years later, where she undertook a mission to British Colombia and Alaska. Upon her return, Ackermann was named round-the-world missionary for the World’s WCTU at the union’s national convention in New York in late 1888. Her role was to spread progressive ideals on the roles of women while also promoting an anti-narcotics movement. 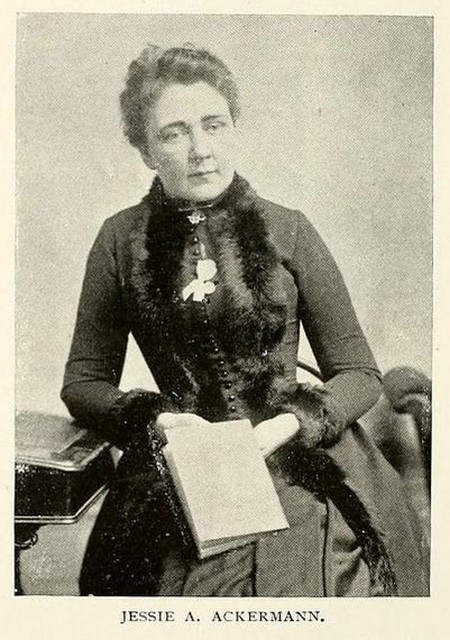 Following in the footsteps of Mary Leavitt, WCTU’s first world missionary, Ackermann travelled to South Australia via New Zealand and local unions were soon established. On 25th May 1891 a meeting was held in Melbourne to amalgamate the Colonial Unions, and The Woman’s Christian Temperance Union of Australasia was founded, with Ackermann appointed as the group’s president. During this time Ackermann also established an Anti-Narcotics Department. With an active presence in the city, Ackermann began lecturing in outback towns using lantern slide techniques advocating women’s political, legal and property rights.

Aside from women’s right, Ackermann campaigned to give residents the right to veto alcoholic licenses in an attempt to prevent assault on women. In 1885 the WCTU managed to get 45,000 women across the state of Victoria to sign a petition ‘asking the government to introduce local option to protect their sex from bad treatment associated with alcohol consumption.’ 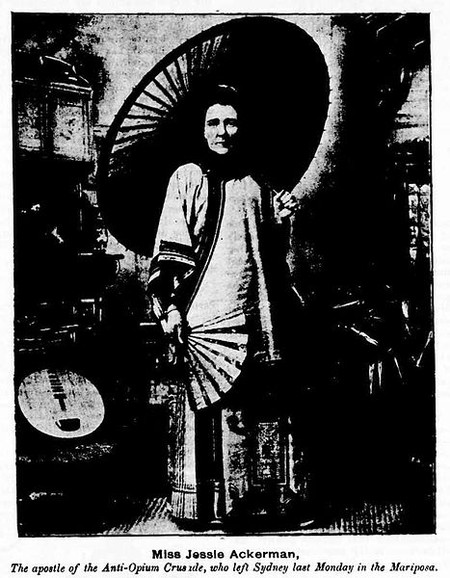 Jessie Ackermann had a broad understanding of the world, having seen more of it than most women in the 19th century. She travelled through Europe, Asia, and Africa often bunking with locals saying ‘I was a guest in nearly two thousand homes, all kinds of homes, rich and poor.’ Ackermann camped at Yosemite, rode the Jenolan Caves on horseback, toured the Taj Mahal, floated through Burma on a tea boat and visited the Ainu people in Japan. Other countries she travelled to include Afghanistan, New Zealand, South Africa and Iceland.

In her lifetime Ackermann wrote an estimated 420 newspaper articles and authored three books: The World Through A Woman’s Eyes (1896), What Women Have Done With The Vote (1913) and Australia From A Woman’s Point Of View (1913) in which she comments on the Australian WCTU and her travels. Among her opinions in the books are thoughts on divorce law, law reform, women’s wages, and women’s education.

In regards to women’s wages, an issue still under scrutiny in 2016, Ackermann wrote: ‘Much of the evil into which young girls fall is due to the cruelly low price paid for their services. Australia may be, and probably is, a working man’s paradise, but it is far from a celestial condition for working and business girls. Domestic service is the only well paid occupation for women and girls.’ 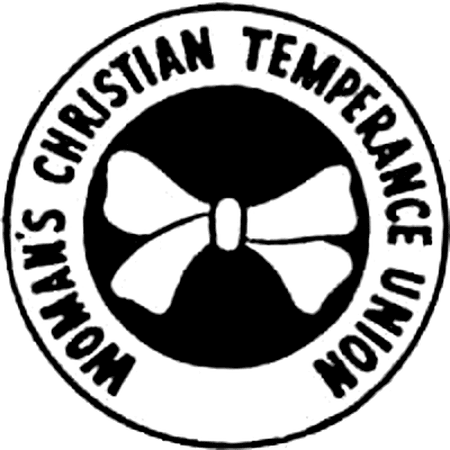 WCTU logo | © WCTU/Wikipedia
Give us feedback