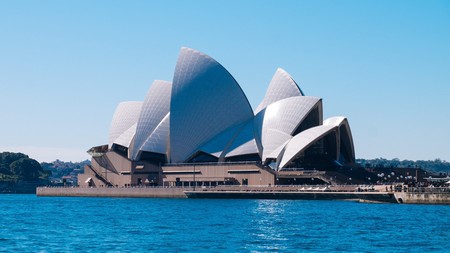 The Sydney Opera House has become Australia’s national symbol, instantly recognisable around the world for its uniquely shaped roof structure jutting out over the harbour. In 2007, the Sydney Opera House was listed as a UNESCO World Heritage Site, cementing its place as a preeminent icon of modernist architecture.

For Jørn Utzon, the Sydney Opera House was his greatest pride, yet he left the project in acrimonious dispute ten years after he unexpectedly won the international design competition to build the opera house. The story goes, that Utzon’s design for the opera house was rejected by the panel of judges until late-comer Eero Saarinen, the great Finnish-American architect and designer, picked up Utzon’s design and declared it the winner. 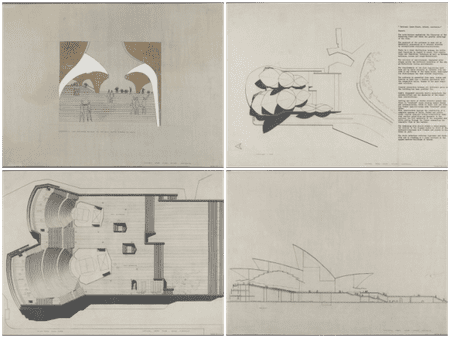 The path from design concept to final construction is fraught, and every architect and designer knows that the process involves constant tension between architects, engineers and clients. First, Utzon’s sketched concept for the reinforced concrete ‘shells’ that would form the opera house’s iconic roof structure were deemed structurally impossible by structural engineer Ove Arup & Partners. Having modified the geometry of the ‘shells’, Utzon’s real challenge came from the caprices and demands of the Australian government.

As a government-sponsored project, the Sydney Opera House was at the mercy of political volatility and the project began not long after the inauguration of a new Liberal government under New South Wales Premier Robert Askin. He saw the Sydney Opera House project as a waste of public funds, and, according to one Australian architecture critic, his Public Works minister “had no interest in art, architecture or aesthetics…For him, as for Utzon, it was all about control; about the triumph of homegrown mediocrity over foreign genius.” 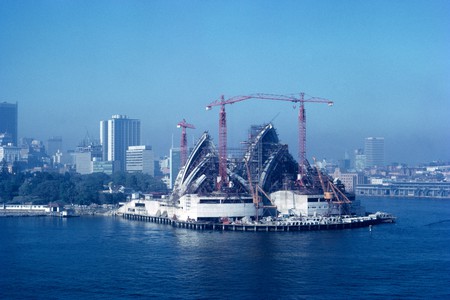 Facing a continual fight for funding, Utzon resigned his position as chief architect of the project and left Australia never to return. Utzon thus never saw the fruition of his work in the completed Sydney Opera House.

Born in Copenhagen, Denmark, Utzon’s first love was ships and he seemed destined for a naval career, following in the footsteps of his father, a naval architect. However, after failing to pass the entrance examinations for the navy, Utzon studied architecture at the Royal Danish Academy of Fine Arts under the tutelage of Steen Ejler Rasmussen and worked with Finnish modernist architect Alvar Aalto.

As a young architect, Utzon visited Paris and came into contact with such influential modernist masters as Le Corbusier and sculptor Henri Laurens. He also took advantage of scholarships to visit the States, which would prove to be a formative experience. 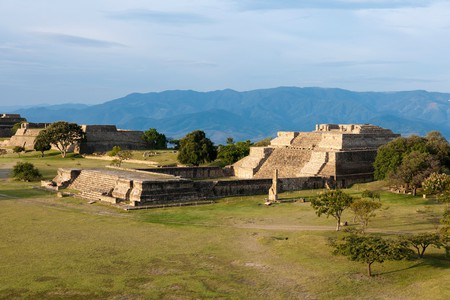 Here, in the deserts of Arizona, Utzon visited the home of American icon Frank Lloyd Wright whose pioneering style of organic architecture, which prized open space and continuity between exterior and interior, would prove influential. Utzon also travelled to Mexico; the Mayan pyramids with their strong horizontal platform structures would be resurrected in Utzon’s design for the Sydney Opera House and other works.

Concurrently with his work on the Sydney Opera House, and after his acrimonious departure, Utzon was also commissioned for a number of projects in Denmark and abroad, cementing his reputation as one of Denmark’s most influential architects and a modernist master.

Utzon’s design for the Kingo House development in Denmark revealed the his design philosophy of additive architecture in which the architectural structure develops organically in relation with the environment and its surroundings. For these 63 housing units, Utzon was inspired by Danish farmhouse architecture as well as the courtyard design of Chinese and Islamic houses. 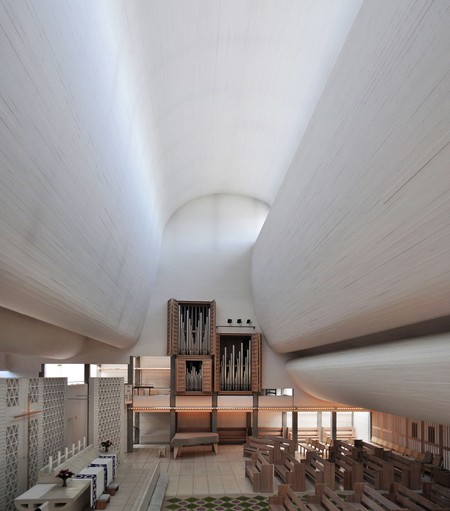 Another iconic work by Utzon is his design for the Bagsværd Church in Copenhagen. Bringing a modernist and decidedly contemporary sensibility to church architecture, the church was a far cry from the high vaulted ceiling or elevated domes of traditional church buildings. Instead, Utzon’s design for the Bagsværd Church features a gently curving interior ceiling structure that evokes billowing clouds along with ample natural lighting that flows in through skylights. In Utzon’s own words: “I derived from the drifting clouds above the sea and the shore [forming] a wondrous space in which the light fell through the ceiling — the clouds — down on to the floor represented by the shore and the sea.”

Other examples of his work can be seen in Melli Bank in Tehran, the National Assembly of Kuwait with its striking roof structure as well as the architect’s own houses in Hellebæk, Denmark and Can Lis and Can Feliz in Majorca, Spain.

In 2003, Jørn Utzon was awarded architecture’s most prestigious award, the Pritzker Prize for his impressive body of work which transformed the architectural landscape, stretching the possibilities of what architect can achieve. And, although he never returned to Sydney, in 2004, the reception room of the Sydney Opera House was renamed the Utzon Room in honour of the architect. With the interior space fully designed by the architect, Utzon stated: “It (the naming) gives me the greatest pleasure and satisfaction. I don’t think you can give me more joy as the architect. It supersedes any medal of any kind that I could get and have got.” 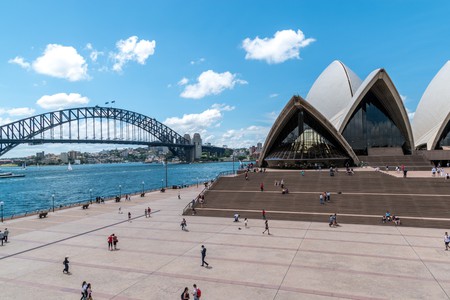 Looking to stay in Sydney? Discover our guide for the best holiday rentals in the city and book now on Culture Trip.