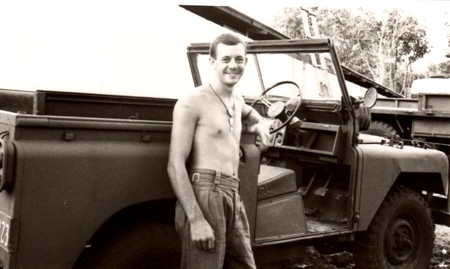 In Vietnam, Courtesy of Robert Tevelen

Robert Tevelen, a Vietnam veteran, served in the army for two whole years. He was ordered to go and serve in the 7RAR battalion and showed great courage and bravery alongside many other men. Robert Tevelen talks about his experience serving in Vietnam, including what Australia was really like during the war years and how the war shaped Australia, making it the country it is today. 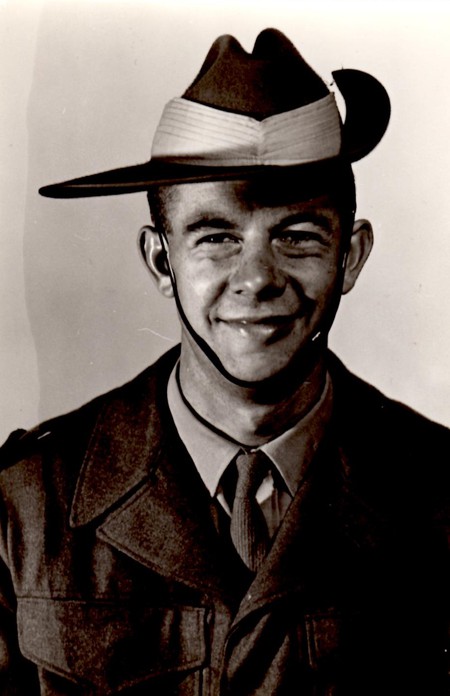 How did you come about to be in the Vietnam War and what process did you have to go through?

I was called up through the birthday ballot and I had to go through all the procedures and documentation and fill out all the forms. I got a letter to say I was in but I ended up waiting for another letter for 12 months. So I decided to go into the city and visit the Labour Department of Labour Industries; I went in there and I said, “my name’s Robert Tevelen. I was called up 12 months ago but I haven’t heard back.” Half an hour goes past and they came back and said, “you’re in”! So, if I hadn’t gone in there, they might have got me lost in the system.

At this stage, my parents had gone to Queensland and I was staying with my mate Bobby Greg, which wasn’t far from Pascoe Vale from where I lived. I think I stayed with him for about 18 months and then I went into the army at 20 years old. 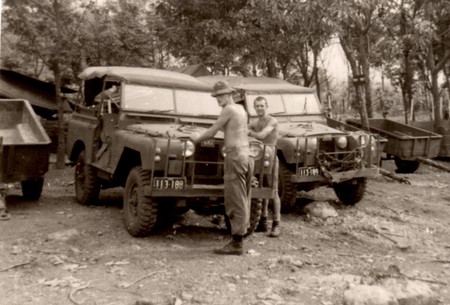 What did you do while you were in the army?

I went into basic training on April 18th in 1966 and I did two years of national service. I came out in April 1968. So, in that time I did the first twelve months of my army training. I did basic training for three months in Puckapunyal, Victoria. Then I left Puckapunyal and went to Singleton in New South Wales for chore training, which was infantry chore training and that was three months. Then I came back to Puckapunyal and the seventh royal Australian regiment had just been raised again. In the previous year it had been disbanded, but because the Vietnam War needed us, it had been raised again. I came back to Puckapunyal and they put me in 7 RAR. In this time, we were still training and we went twice to Shoalwater Bay in Rock Hampton and we did three weeks jungle training at Canungra in Queensland. In that time I came out the fittest person I had ever been in my life, because if you went to the tent to go to the toilet or mess (which was the canteen) you had to run on the double and if you got caught you had to do 100 press ups on the spot. They made you stay there till you had done your 100 press up; even if it was your rest time, they made you stay. I finished my jungle training and after the first 12 months, I went to Vietnam in April 1967 and came back April 18th, 1968. 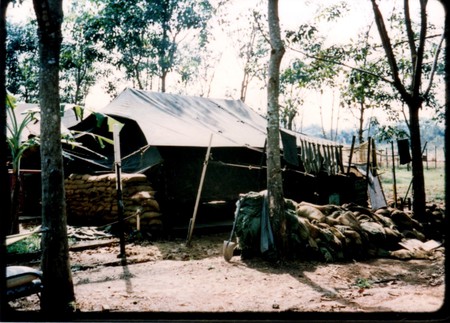 This was the first war that was shown on TV. How did conscription work?

Yeah, that’s right. I think America started to televise it. The way they did conscription was that every month they would pick out so many birthday dates out of that month. It was like Tatslotto, if your birthday came out that month then you were in. My birthday, the 25th of November, came out and I was in. It was an unfair way doing it. It was called the birthday ballot and if your number came up and you said no you would be put in jail. Your choices were to go into the army or go to jail for two years and I picked to go into the army. I thought to myself, I’m going to make the best of this. Which a lot of other guys did and they thought the alternative wasn’t very good.

I did two years in the army, and was one of the lucky ones to come back. A lot of guys didn’t come back, and there were 500 who were killed. There were well over 2000 or 3000 that were wounded. In that time, when you’re walking around with weapons for 12 months, there are always accidents. A lot of people got killed because of accidents. The first week I was over there, we went out on patrol and one of the men had his safety cap off and shot his mate in the back. He was jailed for about three weeks but the punishment was that he had to live with it for the rest of his life. It happened a lot and, in fact, many soldiers weren’t actually killed in action. However, people were told that they were.

We were called the ‘Porkys’, or ‘Pigs’. When the 7 RAR (Royal Australian Regiment) was raised, the men used to go down to the hotel bar and have a big sort of booze up on the Friday night. The commander would come down the next morning and call them ‘a pack of pigs!’. So that’s how we got the name, from Kernel Eric Smith. The name stuck and now, when we have reunions, the battalions get a pig and they put it out the front. 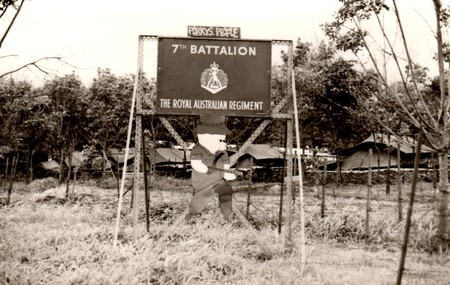 How do you think society handled the draft?

Originally, the Australian society was all for it, but as the war dragged on American mothers got agitated: they didn’t want their boys killed, and the same happened here. They then started the anti-war protests with Jim Cairns. As the war went on, they kept reporting in the newspapers that there were troops getting killed and people started to think about it and didn’t like it. Eventually the protests became bigger and bigger, until they pressured the government into bringing all the troops home. The social side turned, it was a 10-year war, but it turned after six or seven years that the view of Australian people changed.

After the war, was there any therapy or guidance (debriefing) to help the men who had served?

No, because – and this goes back to the First and Second World War – they used to get PTSD called war neurosis, or shell shock.

Do you think this was because no one wanted to talk about the war, or mention it?

Yeah, and the wives used to be treated brutally because no one wanted to talk about it. Nowadays, there’s help available: the men who have been to counseling and talked about it have improved. These days, the government is really putting money into people who have come back from Iraq and Afghanistan. The army are channeling them into that direction to get help, but they have to want to get help. And you need to get counselling and debriefing because what happens is, like us, one day you’re in the jungle in Vietnam and the next day you get on a plane over night, they let you out onto the street, in the city, and we thought it was like being on another planet. There was no debriefing from the army whatsoever. It was a pretty big culture shock for many guys. A lot of guys couldn’t handle it. They couldn’t handle the city. A lot of guys moved to the bush and out of the city. I remember I came home during the week and on the following Saturday night we went to a party with all our friends and not one person asked how the last 12 months went. No one said anything about it. It was like I hadn’t been away.

Do you think this was because everyone rather wanted to ignore the war? And the issues?

Yeah, they did. You also sometimes didn’t tell people you were going to Vietnam because a lot of people had mixed reactions to the war and some called the people baby killers. Some people were alright and others got very aggressive. Sometimes when people asked you how Vietnam was, you only said it was alright. You never explained what it was like. I never explained it to anyone. It’s hard to explain it to someone when they haven’t been through it themselves. There’s an old saying: ‘unless you drink it from the cup, you don’t know what it’s like.’ 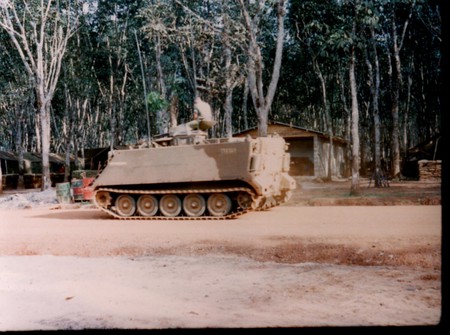 Do you think that the impact came years later and not immediately after the men returned from the war?

It varied. Some guys had done two or three tours in Vietnam. Those guys couldn’t fit back into society because of Vietnam and the experience. When you’re young your mind can handle it but as you get older, even in your 70s and 80s, you can get war neurosis or PTSD. It can hit anybody at any age when they come back from the war zone. As you get older, your mind can’t handle it as well.

Yeah, you only need a little thing to trigger people. A lot of different little triggers sent men off. It can be really small. Like my mate, Maxy, used to get mad at people who pinched his parking spot. That was definitely a trigger. It was because he had PTSD, it wasn’t because of anything else.

Sometimes a trigger is set off and they can’t stop. There was one guy who went into the Department of Veteran Affairs and he was so mad because he didn’t get his pension from the TPI. He shot the girl behind the counter. He couldn’t understand that his TPI was rejected because if you’ve already got compensation from an accident, the government isn’t going to give you compensation for your TPI. So he was triggered and killed a girl behind the counter. 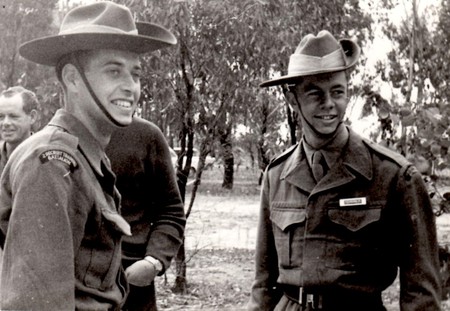 How did the Vietnam war shape Australia in the years after?

Well, everything became freer. It was a lot more disciplined in society in my mum and dad’s era, but after the war it became a lot more free. It was the hippie stage. They broke down a lot of barriers. You know, with the Beatles. The pill also came along. If you got pregnant in the old days, it was the worst thing that could happen. Your family would be really ridiculed. But with the pill, it wasn’t as bad and no one got pregnant anymore. A lot more protests came about and Australians felt like they had a voice. It definitely changed society in that way, it became freer.