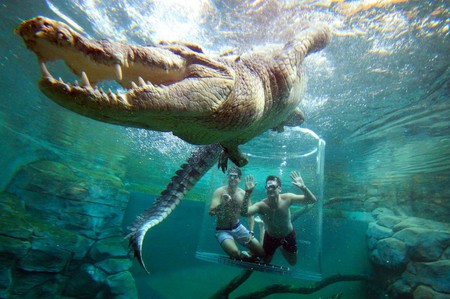 The Cage of Death | © Crocosaurus Cove

Crocodiles and Darwin go together like alligators and Florida. When visiting the Northern Territory capital, ensure you visit Crocosaurus Cove, its number one attraction. Here’s a glimpse at what you can expect to see at Crocosaurus Cove, including the Cage of Death, Australia’s only crocodile dive.

Crocosaurus Cove opened in the middle of Darwin in 2008. It’s home to some of Australia’s largest saltwater crocodiles, which range in age from three months to 80 years old. One of the older residents is Burt, a star from Crocodile Dundee. There’s also the resident Crocosaurus couple, named William and Kate. 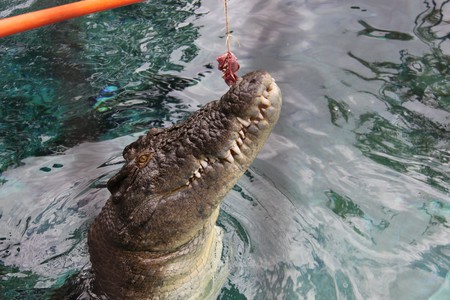 Crocosaurus Cove has the world’s largest display of Australian reptiles, too. There are over 70 different reptile species on display in the Reptile House, from places like the Northern Territory and Western Australia’s Kimberley region. There are daily Meet the Reptile shows, where you can get up close to certain slithery creatures including a baby crocodile. 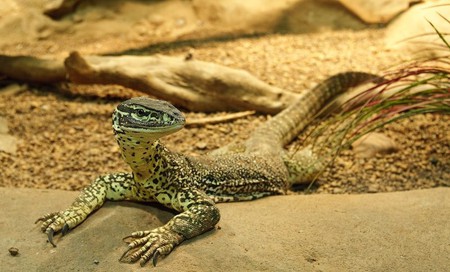 One of the many reptiles at Crocosaurus Cove | © Marek / Flickr

There’s the opportunity to safely ‘swim’ with a crew of juvenile crocodiles in the unique swimming pool, which has a clear tank wall that separates you from the reptiles. Alternatively, you can fish for – and feed – a crocodile instead. The 200,000-litre freshwater aquarium at Crocosaurus Cove is modeled on a typical Northern Territory river system. It’s home to stingrays, barramundi, archer fish and many more marine species. There’s also a World of Crocs display, a Story of Darwin film and a turtle billabong as well. You could easily spend a family-friendly day exploring Crocosaurus Cove. But the biggest highlight has to be the Cage of Death.

Come face to face with the world’s largest reptile in Australia’s only crocodile dive at Crocosaurus Cove. Called the Cage of Death, the perspex cage is first suspended above a swimming pool that’s home to five-metre long saltwater crocodiles. Then the cage is lowered into the water, which gives participants 360-degree views of the crocodiles. So there’s no option but to get face-to-face with them.

The Cage of Death | © Crocosaurus Cove

The Cage of Death experience lasts for 15 minutes. Crocosaurus Cove handlers regularly feed the resident reptiles, to encourage movement and ensure you have a close encounter you never forget. There are also photographers on-site, both in and out of the enclosure, to capture this memorable occasion for every participant. The Cage of Death does fit two people, so you don’t have to experience the encounter alone either. Are you brave enough to face the Cage of Death?