How To Spend the Perfect Week in and Around Sydney 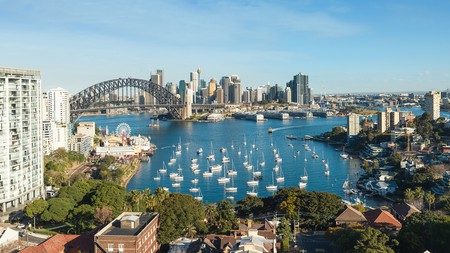 Travellers are spoilt for choice when it comes to discovering once-in-a-lifetime experiences around spectacular Sydney. As well as extraordinary wildlife and dazzling scenery, the area also offers world-famous beaches, breathtaking mountain vistas and everything in between.

Contrary to popular belief, Sydney is incredibly accessible for a quick week-long break. This is partly due to the AUD to USD exchange rate hitting a record low, which means there’s never been a cheaper time to visit, as well as the ease with which you can hop on Qantas’ quick domestic flights for excursions close by in New South Wales. A perfect week here? Easy. Here’s how to plan your epic trip.

As the state capital of New South Wales, Sydney is a global city where you can experience a glorious assortment of culture, art, nature and history. Once you’re in town, make a beeline for vibrant Circular Quay – a harbour, tourism precinct, historical district and transportation hub. It’s also the best place to get up close and personal with some of Sydney’s unique sights, including the Sydney Opera House and the emerald-hued panorama of the Sydney Harbour Bridge. Next door, at The Royal Botanic Garden Sydney, you can admire Mrs Macquarie’s Chair, situated at the end of a flat meandering path overlooking the blue waters of the Sydney Harbour. Carved from sandstone in 1810, it was commissioned by Governor Macquarie for his beloved wife Elizabeth, and today the garden hosts open-air cinema screenings here in January and dramatic opera performances under the stars in March and April. Visiting at dusk? Eavesdrop on chattering possums and look skyward for flying foxes. 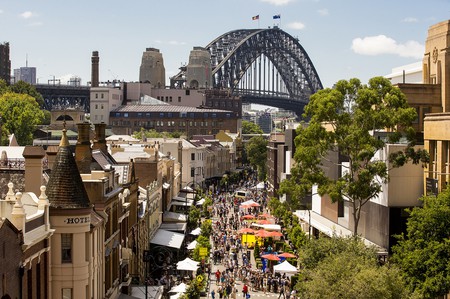 Of course, no trip to Sydney is complete without experiencing the world-famous golden Bondi Beach. Grab an express bus from the city for a short 20-minute ride to surf, sunbathe and relax. Casual restaurants nearby welcome sandy feet, and the shopping is first-rate. Or save your cash for the Rocks Markets back in the city centre, which is on every Friday to Sunday, where you can buy unique Australian mementos to take home. Animal lovers should block out an afternoon to admire the koalas and kangaroos at heritage-listed Taronga Zoo Sydney, or connect with nature at the Australian Walkabout Wildlife Park, a working sanctuary that’s home to emus, koalas, kangaroos, flying foxes, dingoes, wombats and Tasmanian devils. Just a quick hour’s drive from Sydney, the park lets you hire a ranger to explore the grounds, which are rich in Aboriginal artefacts. Learn about traditional medicine and bush tucker, and keep an eye out for joeys peeping from pouches.

Byron Bay has a relaxed, upscale hippie energy – think organic hemp matcha lattes, barefoot pedestrians in designer kaftans and friendly locals who don’t look twice at the movie stars who make the coastal town their home. It’s been called the wellness capital of Australia, and its proximity to the verdant hinterlands of a number of national parks, including Mount Jerusalem and Nightcap, makes this destination even more special. Make sure you spend at least two full days relaxing and soaking up the atmosphere here – easily done, as Byron Bay and the Gold Coast is just an effortless one-hour-and-20-minute flight from Sydney. Options for transfer include car hire, private driver or express bus, and will take about an hour. 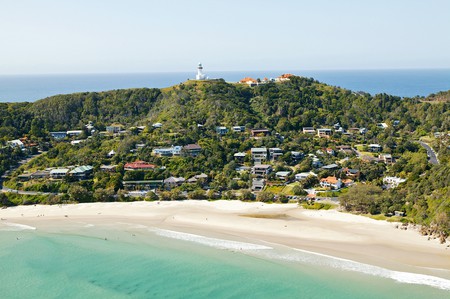 Once in Byron Bay, you’re spoilt for choice when it comes to things to do. For those looking for an escape from the hustle and bustle of the big city, beach hopping around the area’s sandy shores is a great way to wind down, and there are many to choose from. Try the peaceful Wategos Beach, where you can explore the Cape Byron Lighthouse and surf. There’s also the long Tallow Beach, part of Arakwal National Park, and Captain Cook’s Lookout, where you might be lucky enough to spot humpback whales and dolphins. The laid-back town also has a good choice of eateries – paddock-to-plate restaurant The Farm in nearby Ewingsdale is an actual working farm with a mission to improve health and wellness.

Hire a car and spend the day at the UNESCO World Heritage-listed Blue Mountains – named for the azure haze created by the oil that’s secreted by its many eucalyptus trees and fills the air. Australia has a very diverse flora and fauna, and it’s on glorious display in this green oasis, only an hour and 20 minutes west of Sydney. Make sure to visit the quirky town of Katoomba, where you can take a trip on the Scenic Railway, the world’s steepest railway incline, experience the Scenic Cableway or walk the Scenic Walkway. In keeping with the theme, Katoomba is also where you’ll find the Scenic Skyway, a glass-floored cable car that was the first one in the country to take passengers, in 1958. The one in use today is from 2017 and the trip isn’t for the fainthearted, but will reward you with incredible views of the Jamison Valley from 200 metres (660 feet) up. 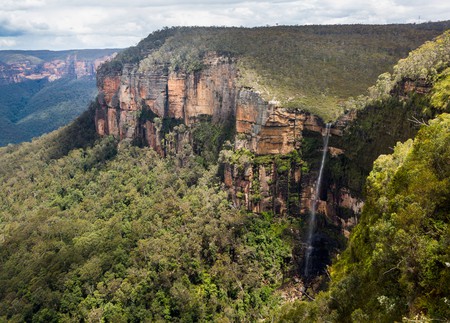 The Blue Mountains is also home to the delightful streets of Leura, a ‘garden village’ where shoppers can find artisan and handmade products – everything from jewellery to leather satchels and fine chocolate. Nature attractions in the area include the Three Sisters – a rock formation that looks as incredible in sunlight as at night-time and features in the Aboriginal Dreamtime Stories — the Sublime Point lookout and the waterfalls of Wentworth Falls.

Port Macquarie and the Hunter Valley

Just an hour’s flight from Sydney, Port Macquarie is a rapidly growing food and wine region. Exceptional offerings include elegant glamping, beachside camel treks, and Harley-Davidson-style trike tours. The world-renowned Koala Hospital is a huge draw for all ages. Established in 1973, it treats sick and injured koalas, but is also involved in research into koala diseases. Its free Feed, Walk and Talk tour lets you see the koalas in its care, and you can adopt a koala to support the not-for-profit organisation. Port Macquarie also boasts gorgeous beaches, and you can walk along its pristine coastline for hours. 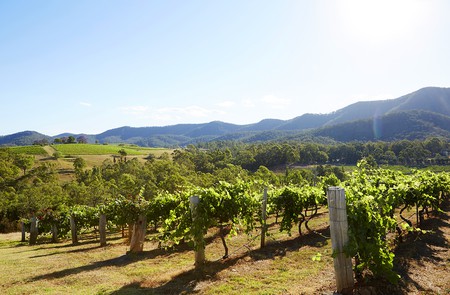 Sydney’s wine region is well worth a visit | © Destination NSW

Just a two hour drive north of Sydney is the Hunter Valley. Chock-full of wineries, with over 150 cellar doors, farm-to-table dining, specialty cheesemakers, art galleries and even a chocolatier or two, Sydney’s wine region is a feast for the eyes and the palate. Among the sweeping landscapes, mobs of kangaroos congregate and practically pose for photos more picturesque than any postcard.

Another UNESCO World Heritage-listed paradise, Lord Howe is whisper-quiet and feels a world away from the city, despite it being only a zippy two-hour flight from Sydney. A haven for nature lovers, it’s virtually untouched and decidedly exclusive with controlled access of just 400 visitors at any time. The island is just 11 kilometres (seven miles) long and a perfect destination for birdwatchers and hikers – but water enthusiasts won’t be disappointed either. The west side of the island features a protected cerulean lagoon crying out for exploration, and there are many stunning places for snorkelling and diving, including Admiralty Islands with its volcanic formations and Erscott’s Hole, where you can see a garden of Staghorn coral. 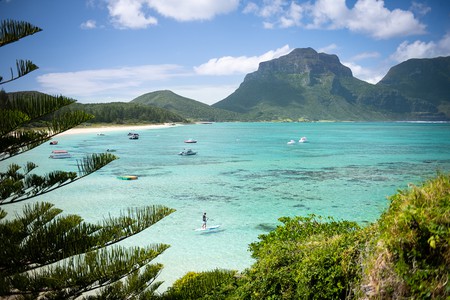 Feeling fearless? Mosey over to Ned’s Beach and feed the fish by hand. Bring a gold coin for a cup of fish food and wade in. Known as the ‘Last Paradise’, Lord Howe Island has been named Australia’s best island, and it’s easy to understand why when visiting it. Since the number of guests allowed is limited, the island’s water and reef system are unspoiled, and it is also one of the world’s most diverse marine parks. Allow at least two full days here.

Take two or three days and hit the scenic Oyster Coast Trail, 120 miles south of Sydney. This gorgeous drive is a 190-mile showcase of all things oyster-related. Visitors can stop in at more than 40 producers and taste the three varieties of oyster farmed here: the diminutive and slow-growing Sydney Rock, the gamey and brawny Pacific, or the rarer and more fussy Angasi. Paddleboard or kayak the brackish estuaries to the pristine leases – the areas of public water where the oysters are cultivated – to view the crops before harvest. Compare the offerings and prepare to eat the freshest oyster of your life – they take the briny delicacies very seriously here. The trail is run by an industry association of oyster farmers, and prides itself on being among the most environmentally sustainable oyster-growing regions in the world.

With regular direct flights from Dallas, Los Angeles, New York and San Francisco, Qantas makes it easy to travel to Sydney, Australia for an unforgettable adventure down under. Book now at qantas.com. 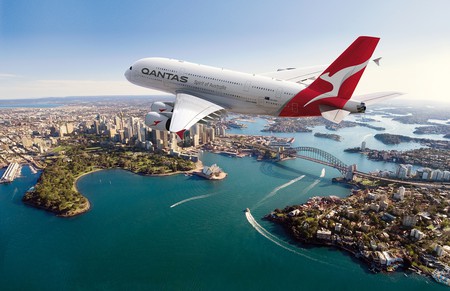 Fly into Sydney over its picturesque harbour | Courtesy of Qantas Airlines