How To Spend 48 Hours in Sydney, Australia 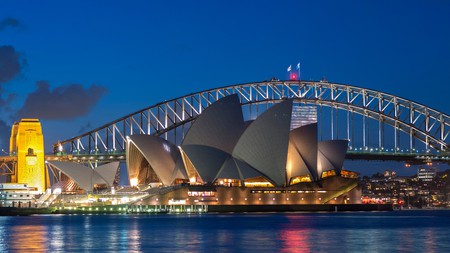 “Two days is barely enough time to scratch the surface” is one of travel’s most tedious clichés, but when it comes to Sydney, it’s also painfully true. A huge global city straddling a spectacular harbour, Sydney commands so much more than a whistle-stop weekend.

For travellers with limited time on their hands, a tour helps squeeze in Sydney’s best bits. Culture Scouts creates itineraries that are completely customised to the group taking them, led by a team of guides made up of local artists and creatives.

“We aim to get under the city’s skin, not just the shiny facade that many people see when they come to Sydney for the first time,” says Culture Scouts’ Erin Eedy. “Our guides show off the city in new and interesting ways that only an artist can… We want to encourage you to discover Sydney differently.

“Sydney is just so damn easy to love! Each suburb has its own personality, so if you’re easily bored like me, just jump on a train and explore somewhere new.”

Boredom certainly won’t be a risk with only 48 hours to fill – especially for visitors who stick to this two-day timetable.

A Sydney itinerary cannot begin anywhere other than the harbour, the sparkling waterway at the heart of the city. Capture the postcard picture of the Opera House and the Harbour Bridge from Mrs Macquarie’s Chair – a leafy stroll through the lawns of the Royal Botanic Gardens – then see these two hulking landmarks up close, first scaling the steps beneath the iconic white sails, then rounding Circular Quay to climb ‘the Coathanger’.

“The Harbour Bridge and Opera House are on everyone’s bucket list,” Erin explains. “But save some money and climb the pylon of the Bridge rather than the BridgeClimb – same sorts of views for way less (BridgeClimb tickets start at $174AUD (£87), while the Pylon Lookout costs $19AUD (£9.50)).

“Also, instead of doing one of the tours of the Opera House, book in for a show instead – the whole place comes alive when you experience it for what it was designed for, the acoustics hum and the excitement in the air is electric.” 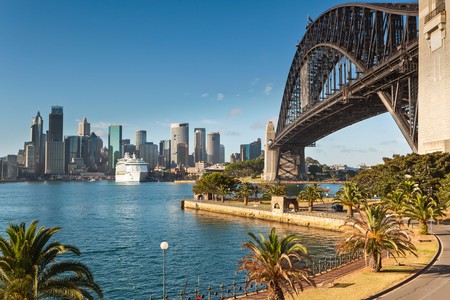 Any trip to Sydney must and will always start with a trip to the harbour, home to the iconic Harbour Bridge and the Sydney Opera House | © Gordon Bell / Alamy Stock Photo

Spend the afternoon doing something cultural at one of the Harbour City’s many excellent galleries and museums. Close to Circular Quay, the Museum of Sydney traces the story of the city from the site of Australia’s first government house. Through the Domain, the Art Gallery of New South Wales is the state’s premier art museum and the Hyde Park Barracks offer a glimpse into convict life. And Chippendale’s White Rabbit Gallery is one of the world’s most cutting-edge collections of Chinese contemporary art, complete with its own tea room for lunch.

But Erin Eedy’s pick is the Museum of Contemporary Art, which occupies a sandstone Art Deco masterpiece peering over the Circular Quay ferries, especially from the alfresco rooftop restaurant.

“MCA is a personal fave of mine,” Erin says. “Despite being the world’s most visited contemporary art gallery, it doesn’t feel overcrowded or one-dimensional with something for everyone… and views for days from their café on level four! The fact that many of their exhibitions are free makes it a really accessible day out for when funds are running low.” 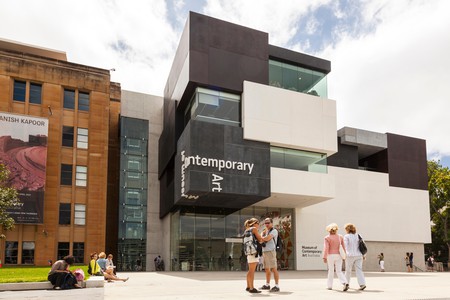 As the sun sets, stick to the city centre, sipping on a string of scenic watering holes. Grab dinner and a cocktail at Cafe Sydney on the roof of Customs House at Circular Quay. Gaze over the harbour from the terrace of the Glenmore Hotel, surrounded by the treasure trove of historic pubs in the Rocks. In the shadow of the Opera House, Opera Bar’s water views are worth every cent of their dizzying drink prices. And underground dens such as Frankie’s Pizza, the Baxter Inn and Palmer and Co pour pints and cocktails beneath the streets of the CBD.

“If you’re stuck in the CBD come happy hour I’d highly recommend checking out Bulletin Place Bar,” Erin adds, recommending their fruity, seasonal cocktails. “Hidden away behind the pink facade and no sign on the street, it’s tricky to find – but totally worth it! They’re consistently placing in the world’s top 50 bars, with a cocktail list that changes daily and a special monthly drink that incorporates local indigenous herbs and ingredients. It’s pretty special.”

Kick-on with a late-night bar crawl up Oxford Street, where legendary LGBT venues like Stonewall, Palms and the Colombian sit next door to modish small bars and eateries like This Must Be The Place and Big Poppa’s on Sydney’s rainbow mile. 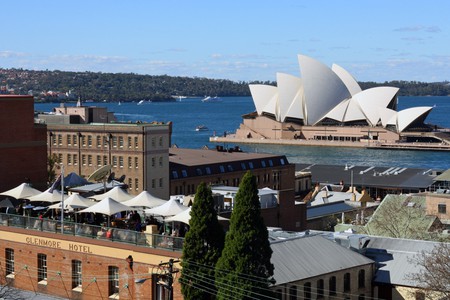 Weekend mornings in Sydney are all about markets, particularly in the bohemian Inner West. The converted rail yards of Carriageworks in Eveleigh fill up with farmers’ markets and food trucks every Saturday, while vintage clothes hunters converge on Glebe the same day. The Rocks Markets fill the cobblestones every Saturday and Sunday, too. Bondi (Saturday) and Marrickville (Sunday) are two more of Sydney’s best markets.

“Markets always will hold a fond place in my heart, and Glebe is arguably the best spot to check out on Saturday mornings for vintage (and pre-loved) clothing, succulents, yummy pastries and live music,” Erin explains. “For a more polished shopping experience, head over to Paddington markets where there are local clothing, shoes and jewellery designers aplenty. Famous Aussie brands like Dinosaur Designs and Zimmerman actually got their start at these markets, so I’m always keen to discover a great brand before everyone else does.”

While the markets only run on weekends, brunch is a seven-day-a-week obsession. Surry Hills on Central’s doorstep is the best place to grab a smashed avo from the suburb’s string of specialty coffee shops, headlined by the Paramount Coffee Project, Reuben Hills and Single O. 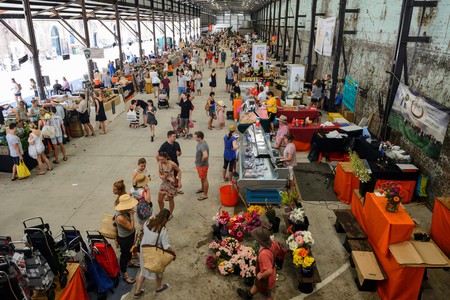 Sydney is blessed with a bevy of brilliant beaches – Manly is a stunning ferry ride from Circular Quay, Balmoral isn’t far from the harbourside Taronga Zoo, and the Royal National Park in the south of Sydney is lined with golden arcs of sand. But for visitors with limited time, the Eastern Suburbs supply a trail of top swimming spots along the Bondi to Coogee coastal walk, which takes two or three hours to conquer.

Start in North Bondi with a coffee at Harrys or Porch and Parlour before strolling past the iconic Bondi Pavilion and Bondi Icebergs ocean pool, then joining the joggers, dog-walkers and wannabe social-media influencers along the clifftop walk to Coogee, stopping for a dip at Tamarama, Clovelly, Bronte and Gordon’s Bay along the way.

“In summer, I really love enjoying what Sydney is best known for – sun, surf and salt water – but avoiding the tourist traps of the main beaches and heading to Gordon’s Bay,” Erin says. “It’s one of the beaches along the Bondi to Coogee coastal walk, but instead of sand has these large flat rocks you can lay on and finish your book.” 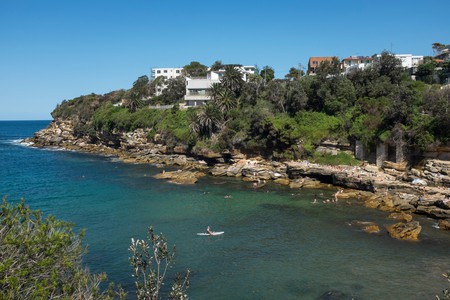 That 6km (3.7 mile) seaside stroll works up an appetite that should be sated back in town, either at one of Chinatown’s Asian eateries or the bulging menu of eateries along King Street in Newtown. Erin Eedy’s favourite food haunt is Spice Alley in Chippendale, an inner-city courtyard styled after South-East Asian hawker markets with street art slathered on the walls.

“Chippendale is a real goldmine with some amazing art galleries, cafés, restaurants and small bars,” Erin says. “I spend way too many evenings at Spice Alley with friends. Grab a bottle (or three) from neighbourhood Chippendale Cellars and order loads of reasonably priced dishes from all over Asia to share, sans corkage or crazy Sydney markups on drinks.”

Toast this rapid-fire weekend in Sydney with another drink, either at Redfern’s eccentrically artistic Bearded Tit, or somewhere in Newtown, with a choice of old-school pubs like the Courthouse as well as trendy cocktail bars like the Midnight Special and Earl’s Juke Joint. 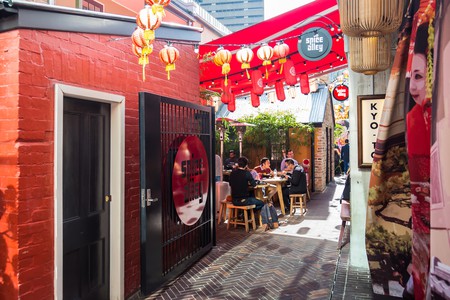