How To Navigate Transport in Sydney 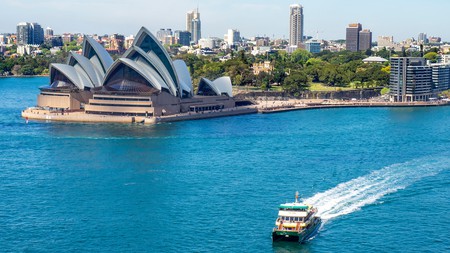 Two Danish architects have been given the keys to the city of Sydney. One is Jørn Utzon, the brains behind the Sydney Harbour Bridge. The other is Jan Gehl, the visionary urbanist responsible for a less glamorous but no less important project: Sustainable Sydney 2030, the blueprint for the ‘Copenhagenisation’ of the Harbour City.

“Sydney has always been a great city, but for too long it put cars before people,” Gehl said when he was awarded the keys in 2017, 10 years after the City of Sydney embraced his recommendations for more bike paths, revamped laneways and improved public transport. 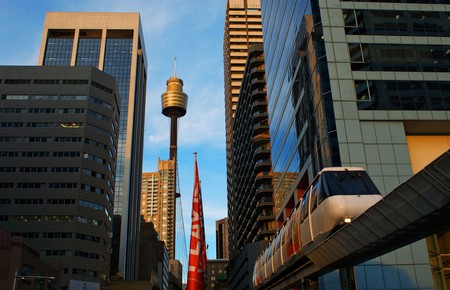 “I am so pleased to see a pedestrianised George Street under construction, laneways that are now celebrated not feared, and more trees, parks and open spaces than ever before.”

With a brand new tram system, a soon-to-be electrified bus fleet and an ever-expanding network of cycling routes, exploring Sydney has never been easier… or more green.

London has the Oyster card, Hong Kong has the Octopus card, and Sydney has the Opal card. After a few teething problems when it was introduced in 2012, the pay-as-you-go smart card has been easily adopted by Sydneysiders, allowing them to tap on and tap off train, bus, light rail and ferry services everywhere from Newcastle in the north to Illawarra in the south and the Blue Mountains in the west.

The card itself doesn’t cost anything (although the minimum initial top-up is $10), and can be picked up from countless retailers across Sydney, including any 7-Eleven or major supermarket, as well as the airport for visitors flying into the city. On top of the convenience of being able to preload credit, the Opal card provides a discount on single fares – it’s about 20% cheaper to tap on and off rather than queue up for a single-use ticket. 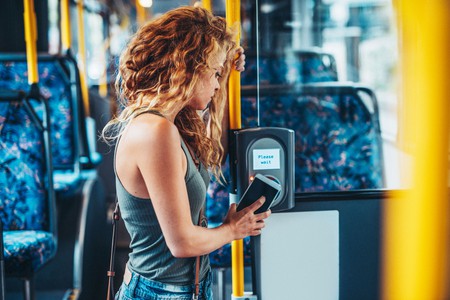 Introduced in 2012, the pay-as-you-go smart card and mobile app can be used on trains, buses and ferry services | © Drazen_ / Getty Images

Pro tip: Download the Opal Travel app on iPhone or Android to plan your trip, check out fare estimates and top up your balance on the go. On your desktop, Transport NSW’s trip planner is also worth bookmarking.

One of Jan Gehl’s top tips was pedestrianising George Street and adding light rail down Sydney’s main drag, which is exactly what the city has done. A shiny new tram line from Circular Quay to Randwick through the CBD was unveiled in 2019, adding to the existing service to Dulwich Hill in the Inner West and the under-construction Parramatta line to be completed by 2023.

“It’s like having your first ride at the circus or the show, it’s so exciting,” Sydney’s lord mayor Clover Moore said on the tram’s maiden voyage down George Street in 2019. 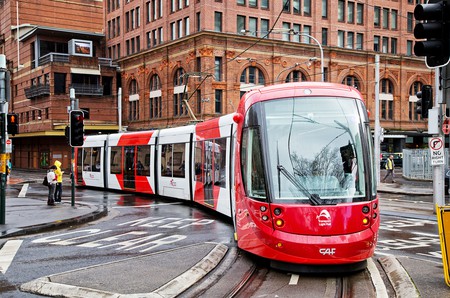 After the pedestrianisation of George Street, a new tram line through CBD was unveiled in 2019 | © Nick Williamson / Alamy Stock Photo

Pro tip: Unlike Melbourne, where visitors can hop on any tram within the bounds of the CBD for free, Sydney doesn’t have a free tram zone. That means commuters must tap on and tap off for even the shortest journey within the city centre.

Rail is the backbone of Sydney’s public transport system, but delays, cancellations and overcrowding win little affection from the locals.

That tongue-in-cheek assessment is obviously too harsh, particularly away from the peak-hour crush – Sydney Trains gives a 30% discount on trips outside 7am to 9am and 4pm and 6.30pm Monday to Friday to encourage commuters to jump on calmer services. Central in the south of the CBD is the hub of Sydney’s 175 stations across nine lines, which blanket almost the entire city. 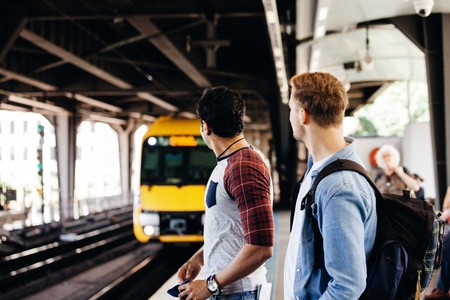 Rail is the backbone of Sydney’s public transport system, but overcrowding can be a problem especially during peak times | © Marilyn Nieves / Getty Images

Most visitors stick to the City Circle line, which loops around Central, Town Hall, Wynyard, Circular Quay, St James and Museum, covering all the CBD attractions, and T1 – the scenic trip across the Sydney Harbour Bridge to Milson’s Point, a leafy neighbourhood that supplies a stunning view of the skyline back across the water. A 0-10km trip costs $3.61 ($2.52 off-peak), and trains run at least every 15 minutes between 4am and just after midnight.

Pro tip: The train is the easiest way to get from the airport to the city centre. The Airport Link isn’t cheap – $14.87 is added to the regular Opal fare – but travellers get what they pay for: a smooth 12-minute glide into Central, at least every 15 minutes between 5am and 1am.

Buses fill in the gaps in the train system, particularly around Manly and the Northern Beaches, although a journey during rush hour can be an equally squishy – and even more gridlocked – ordeal. Sydney’s infamous traffic means buses are best avoided if there’s an alternative route, such as the iconic ferry trip to Manly, which cuts out a nightmarish hour-plus on the road. The 333 bus is the only public transport to Bondi Beach, though.

A new fleet of eco-friendly vehicles might improve the experience once they’re implemented by 2022. The state of New South Wales is electrifying Sydney’s ageing diesel fleet with 8,000 new electric buses to eventually reduce emissions to zero.

“Zero emissions are becoming the standard with their significant environmental, health and operational cost benefits being experienced now in cities like London, Paris and Amsterdam,” transport minister Andrew Constance said. “As a truly global city, Sydney deserves the same.” 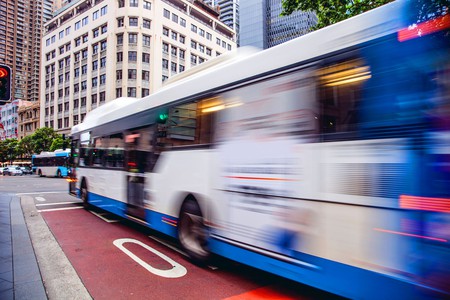 Buses run virtually around the clock, with more infrequent services between 1am and 5am as well as on weekends. Private operators control some routes but they’re all covered by the Opal card — just tap on and tap off. Trips cost the same as the light rail. Most lines are Opal-only, so make sure credit is pre-loaded at a 7-Eleven, major supermarket or train station before hopping on – bus drivers have no qualms booting people off to top up.

Pro tip: Adding a short bus trip to a train journey is super cost-effective on the Opal card. For example, after catching the train from Milson’s Point to Central ($2.52 off-peak), a bus to the Sydney Cricket Ground or Sydney Uni only costs an extra $0.24. Cheap way to cut out a walk.

Sydney and cycling have a complicated relationship. The Harbour City’s topography might be beautiful, but winding, hilly streets are tricky to navigate, and the attitude of drivers doesn’t make it any easier. A web of dedicated green-coloured bike paths weave through the CBD, but Sydney’s cycling infrastructure is a dog’s breakfast compared to most European cities.

Early dalliances with dockless bike-sharing have also been a mess. Reddy Go, oBike and ofo all came and went in 2018, with their fleet of bicycles spending more time dumped in the harbour or hanging off tree branches than they did on the road. 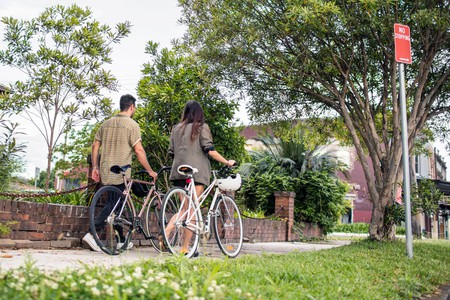 Sydney has dedicated bike paths that weave through the CBD, but the cycling infrastructure is still in development in the city | © xavierarnau / Getty Images

“Like foreign species introduced before them, the bikes seem to have gone feral in cities like Melbourne and Sydney,” said Monash University’s Conor Wynn.

Mobike and Lime have stuck around, though. Lime charges $1 to unlock their bikes then $0.15 per minute (so $10 for one hour), while Mobike charges $3 per 15 minutes with no unlocking fee ($12 an hour). Plenty of conventional bike shops also rent wheels for about $15 an hour, or $40 for the day.

Pro tip: Wear a helmet. Protection is mandatory across Australia – one of the many things that discourages casual cycling down under – and NSW police dish out $344 fines to riders without helmets. Mobike, Lime and bike shops all include them.

Sydneysiders might not be enamoured with all forms of public transport, but there is one they adore. The sight of ferries cruising past the Sydney Opera House is one of the city’s quintessential images, and has even been immortalised in song. “Meet me down by the jetty landing,” James Reyne warbled in Australian Crawl’s 1983 hit “Reckless”: “As the Manly ferry cuts its way to Circular Quay.” 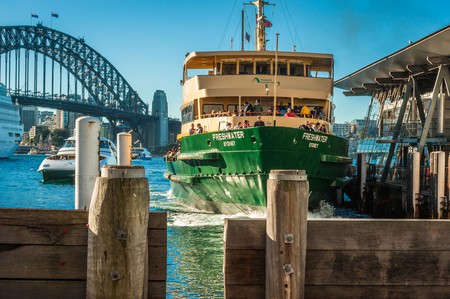 That F1 voyage to the Northern Beaches – a half-hour trip running regularly between 6am and midnight seven days a week – is a must-do for any visitor, while the F4 to Watsons Bay via Rose Bay is a spectacular sojourn into the swanky Eastern Suburbs. Both trips cost $7.65 from Circular Quay, the hub of the ferry network. Short journeys within the harbour (0-9km) are $6.12.

Pro tip: Fill your boots on Sunday, when Opal charges are capped at $2.80. That means travellers could sit on the Manly ferry back and forth all day enjoying front-row seats to Sydney’s sparkling harbour and pay less than they would for a cup of coffee. Opal cards are also capped at $16.10 a day and $50 a week.

“There’s nothing more glorious than to feel a city through my feet,” Jan Gehl said when he was given the keys to the city. “Reducing speeds and removing cars help radically transform cities and encourage more people to walk and explore.” 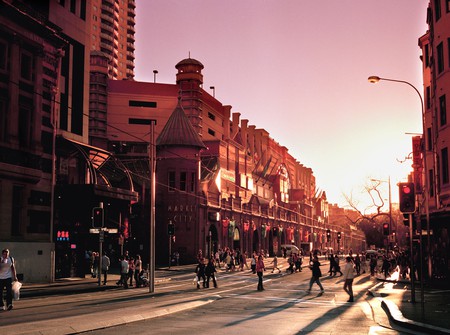 Thanks to Gehl’s advice, Sydney is more pleasant to explore on foot than it ever has been, with a newly pedestrianised George Street and a string of laneways connecting rejuvenated parks and public spaces. The cliffside Bondi to Coogee walk, the Inner West’s Anzac Bridge to Pyrmont Bridge walk, and the winding Manly to Spit walk are other gorgeous trails outside the CBD.

Pro tip: No stroll is more spectacular than crossing the Sydney Harbour Bridge. One side of the iconic “Coathanger” is devoted to cyclists, while the other is a walkway plating up mouth-watering photo opportunities of the water below. It takes about half an hour to tread the mile-long walk, with harbour-front Milson’s Point at the other end.

There’s a reason Sydneysiders embraced Uber so enthusiastically when the ride-sharing app arrived in 2012. Pick-up and set-down zones are strictly policed, cab rank queues are big and charges are even bigger, plus the service is unfriendly – cabbies routinely refuse fares they don’t deem valuable enough, particularly late at night. 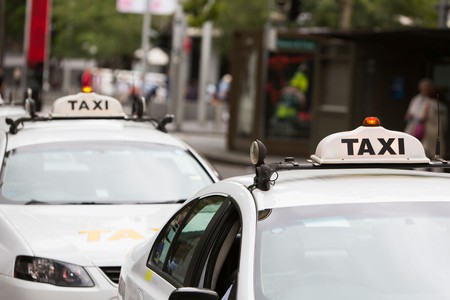 Taxi zones are strictly policed, cab rank queues are long, and charges can be high, especially from the airport | © davidf / Getty Images

It costs $2.50 to flag down a cab ($6.10 between 10pm and 6am Friday and Saturday, when public transport slows down), $2.19 per kilometre ($2.63 between 10pm and 6am), then $0.94 per minute waiting time. That means the trip from Circular Quay to the airport costs a whopping $50 – more in heavy traffic (i.e. always). Taxi drivers don’t expect to be tipped, but round up to the nearest $5 for exceptional service (and in Sydney, this truly is an exception). All cabs take cards, too.

Pro tip: Uber is a much better alternative to taxis when public transport shuts down between midnight and 6am – always more pleasant and usually cheaper than a cab, even when prices surge around midnight. Expect a lift to the airport for $40. Ola, GoCatch and Bolt (the app formerly known as Taxify) also operate in Sydney.