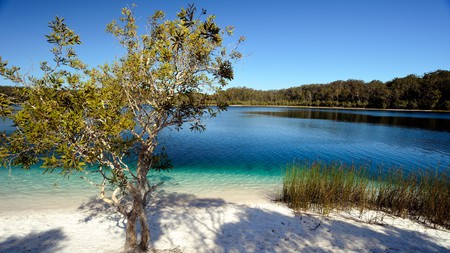 Located just off the coast of southeast Queensland, Fraser Island is the largest sand island in the world – and a place of exceptional natural beauty. With white sand beaches, crystal clear waters, sand dunes and towering rainforest, this Unesco World Heritage site is one of the Sunshine State’s must-visit destinations.

From driving along the sand on 75 Mile Beach to exploring the crystal waters of Lake Mackenzie and discovering ancient forests, there are endless experiences to be had on Fraser Island – and it can be hard to know where to start when planning a trip. Hervey Bay local Tess Schreck has loved Fraser Island since childhood and her dream of becoming a ranger came true in 2017, when she joined Kingfisher Bay’s Eco Ranger team. “The ranger team run a multitude of activities, including canoe paddles, Segway tours, our Junior Eco Ranger’s kids programme and private day tours, as well as daily guided walks,” she says. “We encourage all our guests to join us, as we love to share our island knowledge with everyone.” Here, she shares her tips for how to best experience everything that this island paradise has to offer.

“Fraser Island is a place of exceptional natural beauty and pristine landscapes that range from crystal clear lakes with white sandy beaches to remnants of ancient rainforest that are unlike anything else found in the world today,” says Schreck, from the eco-friendly resort on Fraser Island with both hotel rooms and self-contained villas. “We have beaches that stretch as far as the eye can see, almost 1,000km of 4WD tracks in use, and thousands of animal species to discover. We literally have something to offer everyone.”

At 123km (76mi) long and 22km (14mi) at its widest point, Fraser Island is the largest sand island on the planet. It is found just off the coast of southeast Queensland and was designated a Unesco World Heritage site in 1992.

The island is also known by its indigenous name, K’Gari, pronounced “gurri“, which means paradise. “The Butchulla people are the traditional owners of K’Gari and have lived in harmony with the island for thousands of years, some estimates suggest as many as 50,000 years,” says Schreck. “In terms of European history, the island was first ‘discovered’ by Captain James Cook, who sailed past in 1770 assuming the island was attached to the mainland. Several more expeditions sailed past throughout the years until 1836, when an English captain by the name of James Fraser and his wife, Eliza, were shipwrecked on the island.”

This shipwreck not only gave the island its name, but also started a long chain of events that brought logging, sand mining and tourism. Thankfully, sand mining ended in 1977 and logging ceased in 1991, leaving tourism as the only remaining industry.

The best time to visit

With average temperatures ranging from 17C in July to 25C in December and January, any time of year is good to visit Fraser Island. “Autumn is my favourite time, though,” says Schreck. “Temperatures are still warm during the day but not so humid as summer and the nights are cooler. Water temperatures have dropped a few degrees, which makes swimming more refreshing as well.” Some plant species, including eucalyptus and melaleuca, flower in autumn, which attracts birds, bees and butterflies. 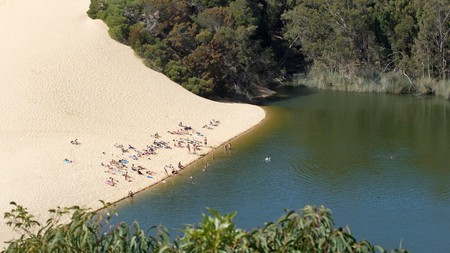 Best way to get to Fraser Island

“The best way to get to Fraser Island is by boat,” recommends Schreck. “Whether you have your own, like my family, or you come over by barge or ferry. The barges not only take walk-on passengers, they also take vehicles, so it’s a great way to bring your own 4×4 over.”

For something special, fly to Fraser Island on board a light aircraft with Air Fraser Island from either the Sunshine Coast Airport or Hervey Bay Airport. They also offer scenic flights from AU$80 (£44.40) for 15 minutes.

How long to stay

“If you’re bringing your own vehicle and hope to discover a lot, then a week is great,” recommends Schreck. “For people who are visiting without a vehicle, I suggest a stay of no fewer than three days. That will give you enough time to get out on one of our Beauty Spot day tours but will also offer you the opportunity to relax and get on island time.”

If time is tight, get a taste of Fraser Island with a day trip. Fraser Tours has a variety of day tours. Or, for something different, set off on a camel safari with Camel Company Australia.

Whether packing for a day or a week, there are several must-pack items, advises Schreck. “A camera or phone is essential to capture all the unbelievable beauty on offer,” she says. “Also swimmers, or as we say in Queensland, togs!” 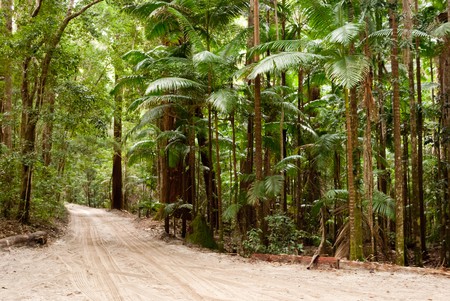 At 1,655sqkm (640sqmi), there’s plenty to explore on Fraser Island. Schreck’s top tip is to pay a visit to the ancient rainforest communities that have trees up to 50m (164ft) tall growing from the sand, such as the poetically named Valley of the Giants at the heart of the island, or the Central Station and Pile Valley area. “There’s nowhere else in the world that has rainforest growing on coastal sand dune systems at the scale that is found on Fraser Island,” she says. “Valley of the Giants is home to some of our oldest and largest trees, some of which are more than 1,000 years old.”

There are plenty of walking tracks through different ecosystems for hikers to explore on Fraser Island, and most are well-defined, sandy tracks that make hiking easy – although watch out for the occasional area of soft sand, which can be hard going. “Admire the changing vegetation and keep your eye out for animals that call the island home, including our famous dingoes, 384 species of bird and lizards. If you’re lucky, you may even spot one of our elusive echidnas or wallabies.”

Platypus Bay on the northern half of the island’s west coast not only has some of the world’s most spectacular beaches, but also offers humpback whales a protected area to rest, mate and play during their yearly migration along the east coast of Australia in winter months.

A drive down the beach is another highlight of Fraser Island. “75 Mile Beach is the longest sand highway in the world and is also a beautiful beach,” says Schreck. “Driving on our sand tracks, whether in a 4WD bus or 4×4, is an exhilarating and beautiful experience.”

Another exhilarating experience can be found with Skydive Fraser Island. Thrillseekers can sign up for a spectacular tandem skydive over Fraser Island that lands on Rainbow Beach.

Finally, a swim in Lake Mackenzie is a must for all visitors, says Schreck. “It’s the jewel of the island – it has to be seen to be believed.”

There are plenty of accommodation options on Fraser Island, from camping and family holiday homes to luxury villas for couples and ecoresorts. Kingfisher Bay Resort is the main hotel on the island, with four pools and three restaurants, each with their own bar. “At Kingfisher, we offer different styles of accommodation for all budgets, ranging from standard rooms to King Rooms overlooking the western bay,” says Schreck. “We also have many holiday homes – you can use all the resort’s facilities and you get to stay in some of the most beautiful properties the island has to offer.” On the east coast, Eurong Beach Resort has a similar range of accommodations to suit all budgets.

If camping, make sure you get a permit and book a campsite in advance through the Queensland Parks website – it can get busy, especially during peak season. There are 45 different camping areas to choose from, ranging from family friendly sites close to shops and beaches with fenced areas to keep dingoes out, to isolated spots immersed in the wilderness. If you’re keen on fishing, those in the know recommend you head to Ungowa on the southwest coast.

Wherever you choose to stay, Schreck has one final piece of advice: “I believe you cannot say you’ve visited Fraser Island unless you’ve actually been out there on the sandy tracks or on a boat and discovered some of our natural beauties,” she says. “You can stay in a resort anywhere in the world, but there’s nowhere in the world like Fraser Island, so you have to make the most of it and explore.” 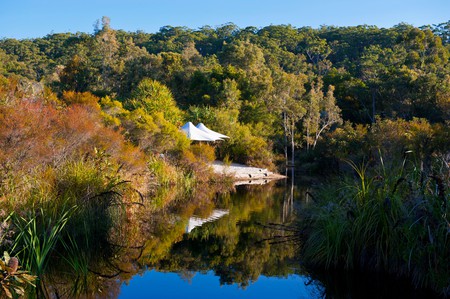