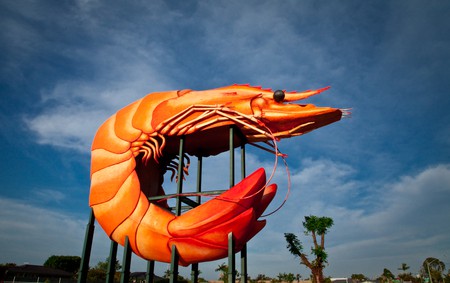 Australia’s quirky roadside statues, often referred to as “Big Things”, hold a firm place in the nation’s imagination. Acting as bombastic, humorous invitations for tourists and travelers to pull over, snap a photo and spend a little money, these novelty monuments have become icons in themselves and are part of the cultural landscape of any road trip Down Under.

Whilst the USA and Canada also have a history of indulging in kooky highway sculptures, Australia brings its own style to the project. In Queensland, a blazing-eyed, white-fanged Big Redback Spider clings menacingly to a dunny (outdoor toilet) in an unassuming gardening centre. In rural New South Wales, a giant beer can sitting proudly outside an Aussie pub invites weary travellers to stop and quench their thirst. And where else on earth could you expect to find a giant Captain Cook or a towering Ned Kelly, in full armour, guarding the local post office? 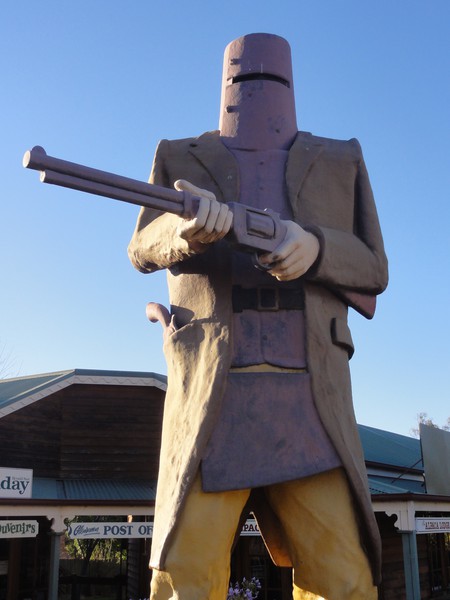 While it’s generally agreed that Australia has over 150 Big Things, a solid tally is something of a challenge, with several monuments slipping into decay and degradation, while brand new ones pop up elsewhere. In 2015, a theme park in Jamberoo, NSW, spent AU $250,000 on an enormous steel, concrete and fibreglass funnel-web spider, which received the Guinness Book of Records Award for ‘Largest Spider Statue in the World’. While the Big Funnel-Web is as shiny and new as she’ll ever be, the maintenance on other Big Things is variable – vintage favourites like Larry the Big Lobster in Kingston, South Australia, receive tender loving care which keep them looking snappy, while a drive past Bombala’s Big Cheese, faded and peeling on the outskirts of town, rarely inspires a second glance let alone a photo opportunity. Taree’s Big Oyster, once a restaurant, now sits empty on top of a car dealership.

The Big Prawn is another sculpture that originally presided over a seafood restaurant, but in 2009, the local council sought to demolish the oversized sea creature. The residents of Ballina, NSW, started a petition to save the statue, and the hardware super chain Bunnings Warehouse decided to rescue the prawn. Relocated, with a shiny paint job and a brand new tail, the Big Prawn now stands proudly outside the new Bunnings store and continues to have his photo taken with road-trippers heading up the East Coast.

The Big Prawn wasn’t the first Big Thing to be relocated – Rambo, the huge Merino Sheep, in Goulburn, NSW, made a journey of several kilometres when works on the bypass forced him to find a new home. 97 tonnes of steel, wire and concrete, he now overlooks a petrol station, gift shop and bakery just off the Hume Highway. This famous icon has even been used to raise awareness of testicular and prostate cancer – his giant testicles were painted blue in 2014 for the ‘blue balls’ campaign. 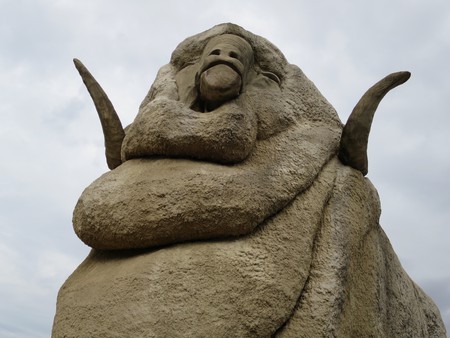 Built in 1964, the Big Banana is often considered the first Big Thing, though naturally this title is also claimed by a giant Scotsman and an oversized dinosaur. Oldest or not, the Banana is the most famous of Australia’s kitsch monuments. Originally a bold and innovative advert for a roadside banana stall beside a local plantation, the site now has a huge souvenir store, an amusement park, a ‘World of Bananas’ exhibition and a café serving up sickly-sweet banana splits. 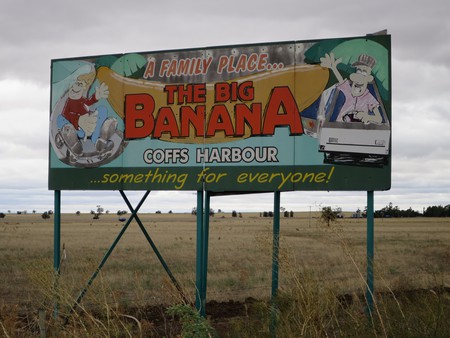 Adaminaby’s Big Rainbow Trout is another example of how cherished a Big Thing can become in the eyes of its local community. When forty years of exposure left the trout’s fibreglass scales damaged and its rainbow colours bleached off-white, the local community raised funds to give the fish a makeover. He’s now more beautiful than ever and a favourite of kids visiting the playground en route to the Snowy Mountains. 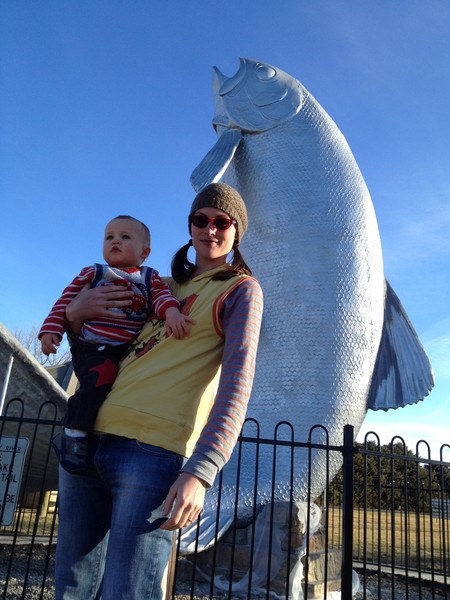 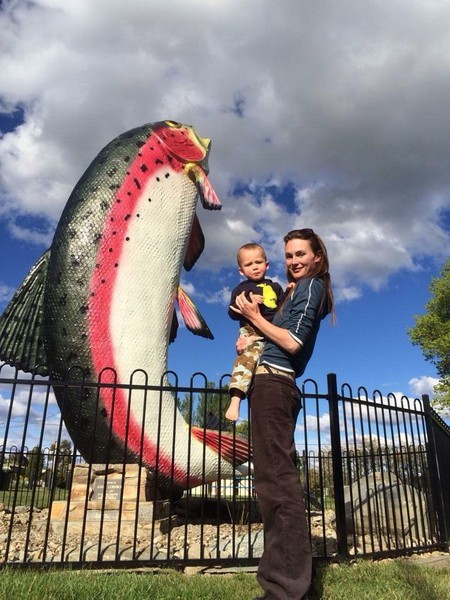 In 2007, artist Reg Mombassa, famous for his artwork for surf clothing company Mambo, drew five ‘Big Things’ designs for a set of 50-cent stamps. The stamps were to commemorate the innovation of the designers and the place these statues hold in the country’s heart, and the project begged the question ‘how do you choose the best Big Things?‘ The final selection, in Mombassa’s distinctive style, were the Big Banana, the Big Lobster, the Big Merino, Queensland’s Big Pineapple and the Big Golden Guitar of Tamworth, Australia’s country music capital.

A great selection, the stamps are a reminder of how the Big Things sensation comes down to personal taste – or even an enjoyable lack of it. After all, one woman’s Big Mango may be another woman’s Big Winch. And while there may be some of us, Australian residents and tourists alike, who find ourselves standing before a vast, oversized gumboot and reasonably asking ourselves ‘why?’, there are others who cannot help but grin wide when an enormous pink galah happily announces ‘Half Way Across Australia!’ 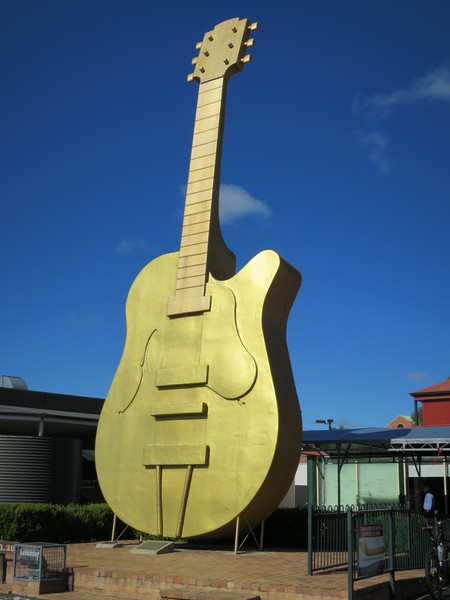