Breakfast in Melbourne With Di Keser of Hardware Société 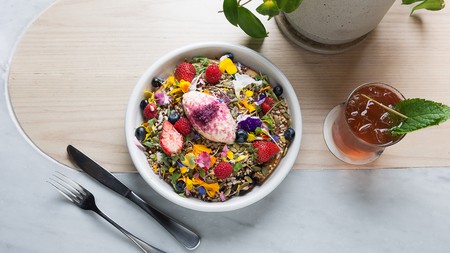 Di Keser and her husband, Will, spend about half of their time trotting the globe in search of great food. The co-owners of Hardware Société – the iconic Paris café that pioneers Melbourne-style brunch – spend six months a year sampling flavours from Istanbul to New York and everywhere in between. 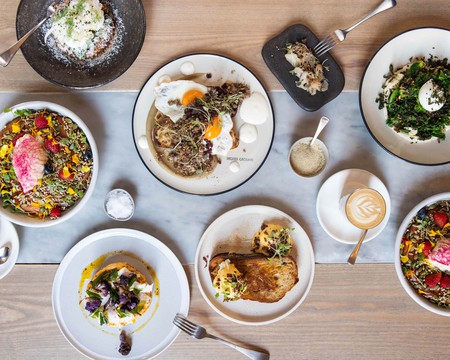 “And Melbourne is probably – from my experience – the most forward-thinking and innovative city when it comes to brunch, absolutely,” Di tells Culture Trip. “Because Melburnians aren’t afraid to push the boundaries, and because we have a very multicultural city, the fusion of what people find acceptable to eat for breakfast [is broader].”

When the husband-and-wife team opened their first café on Hardware Street in the early 2000s, diners struggled to find anything more adventurous than smashed avo on Melbourne menus. But Hardware Société helped redefine the city’s perception of brunch when it opened in 2009. Three years later, Di and Will decided to bring a slice of Melbourne to the shadow of Paris’s Sacré-Cœur.

“It’s been quite difficult giving the French a lesson in Melbourne brunch because, in France, everyone has a formula – you get a juice, coffee, granola and scrambled eggs,” Di explains. “But when they find out that they can’t have those things – the plate is the plate, and it’s not just adjustable – that’s been really interesting.”

This idea of “the plate is the plate” is the heart of the Hardware Société philosophy and a signature of Melbourne’s elite brunch spots. The menu features dishes designed to be eaten as they’re written, rather than some build-your-own brekky where customers can add a side of bacon or avocado to their eggs on toast.

“When you go out for dinner, and you order your duck confit, your steak-frites, whatever, do you say ‘I want sweet potato fries, I want the hollandaise on the side, I want this, I want that, blah blah blah’?” Di asks rhetorically.

“You don’t do that at dinner. So, why do you think that it’s acceptable to do that for brunch? We design a dish in the way that it’s supposed to taste and that’s the experience.

“There are lots of places pushing the boundaries now… you don’t have to go out and just have eggs for breakfast, or a bowl of porridge. Melbourne’s at that point where you can go out and have whatever you want when you want, day or night.”

So, where does Di Keser dine on her handful of trips back to Melbourne each year? Here are eight of her top picks. 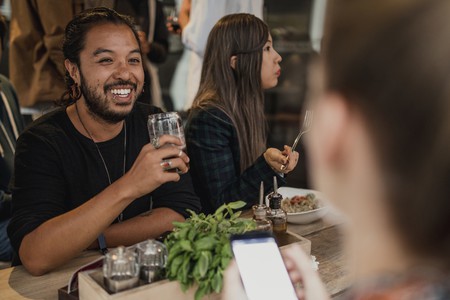 Hardware Société began life on Hardware Street in 2009, before expanding to a second location in Paris in 2016 and a third in Melbourne’s Katherine Place in 2019. And the new venue spells out Di and Will’s ethos in big, bright, buzzing letters on the wall: no eggs on toast. “So, if you think that you’re going to order poached eggs, we can’t do that, and we won’t do that because there are a hundred other cafés in Melbourne that will,” Di says. Instead, Hardware Société dishes up a selection of more inventive brunch dishes – many of which are found in Di and Will’s recipe book appropriately titled No Eggs on Toast. The book’s pink-and-green colour scheme infuses the ultra-modern Scandi fit-out of their new Katherine Place café, where crowd-pleasing plates of chorizo baked eggs and lobster benedict fly off the pass. “We were probably the first to do a lot of those dishes,” Di explains. “And now you see iterations of them throughout Melbourne, which is a nice thing to see.”

If Hardware Société takes the taste of Melbourne to Paris, then this New York-inspired café brings the Big Apple to the Victorian capital. Di and Will Keser were also involved in setting up Bowery to Williamsburg in 2013. It’s an NYC-style diner off Oliver Lane in Melbourne’s central business district, where bagels baked by local supplier 5 & Dime are loaded with lox, pastrami and generous schmears of cream cheese, and then washed down with coffee from Brunswick roaster Padre. “We spend a lot of time in New York, and that harks back to those American roots,” Di says. “Lots of places, you can go and eat the same thing whether you’re in Melbourne or New York – but Bowery does that really, really uniquely. I love going back to Bowery.” 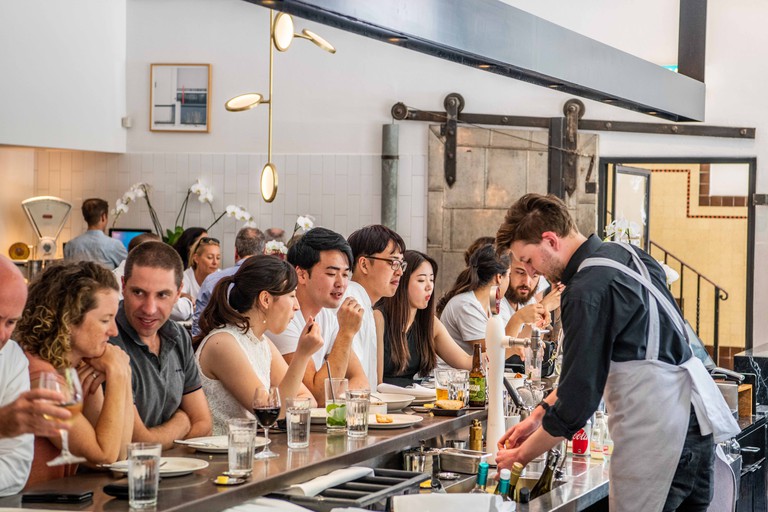 Flinders Lane was better known as Melbourne’s fashion district until influential Melbourne chef Andrew McConnell converted a century-old rag-trade warehouse into Cumulus Inc in 2008, transforming the alleyway into one of the city’s hottest food and drink precincts. This trendsetting all-day diner serves breakfast until 11.30am – try the shakshouka baked eggs or the house-made crumpets with ricotta and honey – before the kitchen starts pumping out shareable plates that Cumulus helped introduce to Melbourne. Meanwhile, the wine bar upstairs keeps humming until late. “We really enjoy Cumulus,” Di says. “It’s always great for a nice, casual-formal brunch.”

This Richmond favourite feels like home for Di Keser – and not just because it was her local café when she used to live in Melbourne full time. The industrial-chic fit-out is warm and cosy, and the welcome from behind the bar is friendly. The menu is familiar, offering a long list of brunch classics, such as fluffy-as-a-cloud pumpkin pancakes – which is Fifty Acres’ most Instagram-famous dish – while the beans come from Dukes Coffee Roasters. “It’s not groundbreaking brunch or anything like that,” Di explains. “But you know you can go there and have a really good bowl of porridge. Its coffee’s always on par, and the people are always lovely – they always remember you. It’s just about the experience.” 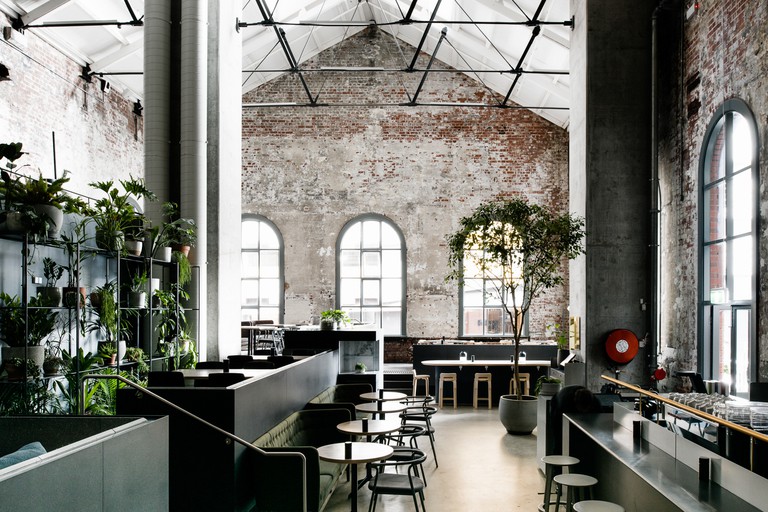 Higher Ground helped revolutionise brunch in Melbourne, and it remains one of the most popular breakfast spots in the city | Courtesy of Higher Ground

Like Hardware Société, hospitality giant Nathan Toleman revolutionised brunch in Melbourne through cafés like Higher Ground, Top Paddock and The Kettle Black. And although Toleman sold those venues in 2018, Higher Ground, in particular, remains one of Melbourne’s most talked-about brekky spots. Sitting on the corner of Little Bourke and Spencer Streets in a cathedral-like space boasting huge arched windows and a lofty ceiling, Higher Ground is another eatery that serves sophisticated food morning, noon and night. It offers its ambitious brunch menu until 3pm, with dishes such as slow-cooked Tasmanian salmon and a confit lamb sausage roll. “It’s a beautiful, big space – very luminous and green,” Di says. “Higher Ground does some really nice stuff.”

One of the things Di Keser misses most when she’s not in Melbourne is world-class Asian food, which this famously multicultural city serves up in spades. And Chin Chin has stood out from the crowd since day one, luring huge queues down Flinders Lane from the moment it opened in 2011. It’s worth the wait for a taste of every corner of the Asian continent – choose from pad thai, butter chicken, larb, crispy duck, massaman curry and more, served alongside a carefully curated drinks menu and a playlist from one of Australia’s top DJs. “We miss that so much – living in Europe, you’re hard-pressed to find that amazing Asian experience that transcends not one cuisine but many,” Di says. “Chin Chin ultimately ticks all of those boxes for us. Its cocktails are awesome – the atmosphere’s great, the food. We’re always happy to go and have a meal there whenever we can.”

Tonka isn’t your average curry house. Surrounded by some of Melbourne’s swankiest laneway bars down Duckboard Place off Flinders Lane, it’s one of the city’s most elegant Indian eateries. Aromas from the open kitchen waft into the intimate dining room – where diners tuck into modern subcontinental meals made with fresh local ingredients, such as the Spencer Gulf kingfish tartare and the barramundi andaman curry – as well as the Thali Bar, which serves eclectic cocktails and Indian bar snacks. “Tonka – for smart, on-trend Indian – is always beautiful,” Di says. Describing Melbourne’s diversity, she says: “You’ve got Thai, Malay, Singaporean, Vietnamese – the list just goes on and on and on. We were so lucky with our immigration in the ’50s, ’60s and ’70s. What that brought to Australian cuisine from a European perspective and from an Asian perspective, you’re never going to see that repeated.”

For a nightcap, Di Keser makes a beeline for Madame Brussels – the Bourke Street bar that bills itself as a rather fancy garden party. A whimsical watering hole named after a 19th-century brothel owner, Madame Brussels is kitted out with pink walls, faux grass, garden lounges and a playful menu of fruity ‘drinkipoos’ to match. The spring punches perfectly suit the sun-kissed rooftop terrace, which is always buzzing with Melburnians marvelling over the views of their city’s soaring skyline. “We love to have a drink up at Madame Brussels when the weather’s good,” Di says. “That’s always beautiful.”