Despite Steve Irwin and Crocodile Dundee creating a stereotype that all Australian’s love to wrestle crocodiles, saltwater crocodiles (also known as estuarine crocodiles and ‘salties’ ) are capable of scaring anyone, including a true blue (Aussie). Being one of the deadliest animals in the country and the largest living crocodilian in the world, it isn’t hard to see why this scaly dinosaur brings out fear in everyone.

They Are Living Dinosaurs At The Top Of The Food Chain

Not only are saltwater crocodiles the largest reptile in the world, but crocodiles themselves also first appeared over 240 million years ago during the Mesozoic Era. Living up to 80 years old, even today, and growing anywhere from three metres to seven metres in length, the Crocodilia order were once at the top of the animal food chain. 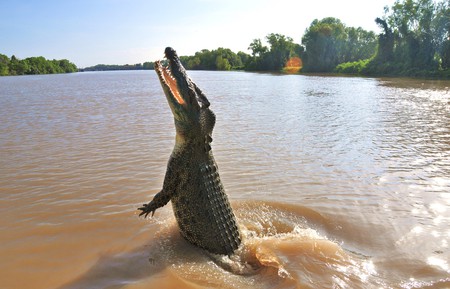 They Are Protected Animals After Almost Being Extinct

Throughout the last century, saltwater crocodiles were hunted almost to the point of extinction. However, in 1971 they became a protected species which resulted in their numbers growing drastically. It is now believed that there are around 150,000 salties roaming the ‘Top End’ (north Australia). Today, they are also a high priority for Steve Irwin’s Wildlife Warriors and can be seen in close proximity at Australia Zoo.

They Live Amongst Australia’s Murky Waters

Although they spend a majority of their time in freshwater rivers and swamps, they move to the estuaries, and occasionally the open sea, during the dry season. In living in the murky waters, it is often hard to see them approach until it is too late. In saying this, they are quite capable of propelling their body in the air through leaping out of the water, and the deeper the water, the more momentum they gain. 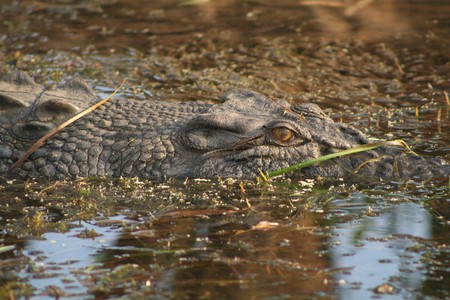 They Cannot Generate Their Own Heat Or Sweat To Keep Cool

Like most reptiles, crocodiles are cold-blooded and cannot produce their own heat resulting in them hibernating or going dormant in the cooler season. Whilst they prefer the heat and live in tropical climates, they cannot generate body sweat, so to cool off, they sit along the river bank with their mouths open. They sweat through their mouths!

They Can Easily Crush You With Their Jaws

They Are Fast Swimmers But Cannot Swallow Prey Underwater

Despite having a heavy set of jaws allowing them to crush their prey, they cannot eat their prey underwater. Within their mouths, they have valves that prevent water going into their throats, allowing them to open their mouths underwater without drowning themselves, meaning they need to rise to the water’s surface, or return to land, to swallow. Although they cannot eat underwater, they can swim up to 32 kilometres per hour and hold their breath for up to an hour. So be careful along the water’s edge as they are capable of ambushing you in the blink of an eye.

They Are Famous For Their Deadly ‘Death Roll’

Their deadliest attack is known as the death roll, which is ‘designed to throw large prey off balance enabling them to be dragged into water easily’. Usually, they will watch their prey from the water and ambush the animal, dragging them into the water. When an animal puts up a fight, or it is a larger prey, they will roll their bodies underwater disorientating the prey, making it easier for him to consume.