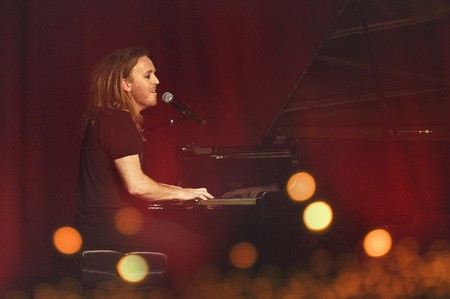 Australians are renowned for their irreverent sense of humour, but these 10 comic geniuses take it to another level. From superb stand-ups to terrific TV talent, introduce yourself to Australia’s funniest comedians.

Cracking the UK is the Holy Grail for Australian comedians — and that’s exactly what ‘Hillsy’ has done since 2012, thanks to his Channel 4 talk show The Last Leg. The show began during the London 2012 Paralympic Games (Hills was born without a right foot, the source of much of his comedy) and is still going strong on British screens 13 years later. The 47-year-old began stand-up in 1989 and grabbed the attention of Australian audiences as the host of music quiz show Spicks and Specks (2005-11) before expanding abroad.

Gadsby’s recent show Nanette — a warts-and-all account of her experience in small-town Tasmania confronting abuse, homophobia and mental health issues — has been universally acclaimed, picking up coveted awards at the Melbourne and Edinburgh comedy festivals in 2017. Unfortunately for fans, Gadsby is retiring from stand-up comedy after Nanette’s run in New York this April, but she won’t disappear from the public eye altogether — Gadsby has acted in Josh Thomas’ celebrated TV comedy Please Like Me as well as presenting a number of art documentaries.

It’s easy to describe Sam Simmons’ appearance — a glasses and moustache combo that looks like a Groucho Marx mask, plus the sort of hair you’d expect to see on your grandfather rather than one of Australia’s funniest stand-ups — but it’s much harder to label his surrealist comedic stylings. ‘Unconventional’, ‘silly’ and ‘rule-breaking’ are all words that have been used, but ‘extremely successful’ is probably the most accurate descriptor of a funnyman who bounces between Australia, Britain and the States performing stand-up gigs and TV shows.

No one in Australian comedy boasts a CV as lengthy as Wil Anderson’s, a razor-sharp wit who’s dominated television, radio, stand-up and most recently podcasting. Anderson made a name for himself on radio station Triple J alongside Adam Spencer (2000-04) and ABC talk show The Glass House (2001-06) before enjoying a decade-long run as host of the Gruen franchise (2008-today) and becoming probably Australia’s most successful podcaster, hosting four popular podcasts. Oh, and then there’s a lazy two-dozen stand-up shows over the past two decades.

The funniest new faces on Australian television are Kate McLennan and Kate McCartney, who shot to fame with their YouTube series The Katering Show, a send-up of Australia’s overheated cooking show market. In 2017, the pair brought their biting satire to ABC series Get Krack!n, which skewered the asinine breakfast TV genre as well as culture in general, earning rave reviews for its incisive, meta brand of comedy.

This English-born funnyman is Australia’s premier musical comedian, combining his songwriting talents and powerful on-stage charisma with sharp satire. Minchin cut his teeth on the comedy festival circuit in the 2000s before becoming the composer and lyricist for the Tony Award-winning Matilda the Musical (2009), starring in Andrew Lloyd-Webber and Tim Rice’s Jesus Christ Superstar, appearing in television series at home and abroad, and creating his new musical Groundhog Day (2017).

Insurance lawyers aren’t exactly renowned for their senses of humour, but this former solicitor has managed to forge a pretty handy comedy career. Micallef first appeared on Australian screens as a cast member of the legendary sketch show Full Frontal (1993-97) before being handed the keys to his own show, The Micallef Program (1998-2001). He’s been an institution of Australian TV ever since, these days delivering the country’s cleverest satire on weekly news comedy Mad as Hell (2012-present).

Szubanski has been the most public face of Australia’s successful marriage equality campaign over the last 12 months, but she owes her profile to a glittering career in comedy, best known for her roles in sketch show Fast Forward (1989-92), Hollywood film Babe (1995), and iconic Aussie sitcom Kath & Kim (2002-07). Magda’s not only one of Australia’s funniest people, she’s also one of the country’s most loved, twice voted our most recognised and best liked TV personality.

If you want an introduction to the Australian sense of humour, book a ticket to one of the Moonman’s stand-up shows. Droll, irreverent and delivered in a broad Australian accent, Mooney saves his bluest material for his stand-up gigs, but also wheels out more broadcast-friendly gear on television and radio. And don’t miss his flawless impersonation of embattled Australian Prime Minister Malcolm Turnbull, either.

He might be 84 years old and jumping into the Dame Edna Everage costume a little often than he used to, but Barry Humphries remains a giant of Australian comedy. His alter ago — a caricature of a flamboyant Aussie housewife — is easily the greatest comic character in Australian history, introducing huge audiences in Britain and the United States to the uniquely Australian sense of humour. Hello, possums!