Attention YouTubers: Australia has Tide Pods You Can Actually Eat 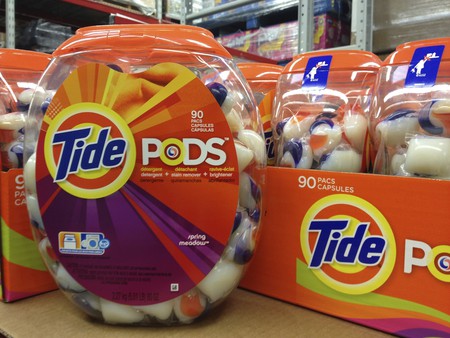 Tide Pods have been seducing many into eating laundry detergent for years. And now, people with a predilection for Pods can satisfy their cravings without risking a trip to the emergency room.

The ‘Tide Pod Challenge’ became one of the internet’s craziest viral sensations earlier this year, encouraging YouTubers to chow down on the colourful capsules of washing liquid.

The meme spiralled so mindlessly out of control that manufacturers Procter & Gamble were forced to shift their candy-looking laundry pods into opaque packaging, and the media chose to issue health warnings against consuming detergent — a message that seems about as necessary as ‘Don’t go swimming in crocodile-infested waters’ or ‘Don’t stick your tongue inside an electric toaster’.

Following the Tide Pod Challenge, some bemused social media users started circulating pictures of chocolate Pod products, spreading the belief that some internet-savvy confectioner had leapt into action and released an entire line of snack foods purely to capitalise on the internet phenomenon.

The truth, of course, is that Australians have been eating edible Pods for well over a decade — years before the first YouTube vlogger chose to eat poison for an online audience.

Move over Tide Pods. Mars has edible pods in three varieties: Snickers, Mars and Twix. Eat this, not that. pic.twitter.com/e5rx6Ac4kv

The pictures haven’t been photoshopped, nor are they some sick joke coming out of a country that abounds with various things (floods, fires, crocs, sharks, snakes, drop bears, the list goes on…) that are trying to kill you.

Australians can literally walk into any supermarket Down Under and tuck away an entire bag of Pods without worrying about a phone call to their local poison control centre. And they’ve been doing so since way back in 2004.

These Pods are essentially a small cup of crunchy biscuit containing a filling (caramel or cream) that’s then coated in a layer of milk chocolate. In other words, a bite-sized morsel of crunchy, gooey, chocolatey goodness that tastes an awful lot better than a gob full of Linear Alkylbenzene Sulfonates, Alcoholethoxy Sulfate and Propylene Glycol.

To borrow from a review from respected confectionery blog Candy Addict, “My words fail to grasp just how delicious these really are… basically they are the physical representation of the word ‘awesome’.” High praise indeed.

And as delicious as these chocolate Pods are, they do come with one warning label: incorrect use can destroy your washing machine.