“I can now declare that you are legally husband and husband”. When marriage celebrant Stephen Lee uttered these words at an intimate garden wedding in Sydney’s Centennial Park last December, it was an historic moment for Australia — and one that was long overdue.

With those 11 words, Ben and Yoshi became the first male same-sex couple to legally marry in Australia, just days after marriage equality was passed into law. They received a special exemption from the statutory one-month waiting period that engaged partners are usually obliged to observe before tying the knot, allowing them to become Australia’s first ‘husband and husband’ just half an hour after another Sydney couple became the first female same-sex couple to marry.

“It was a momentous and historic day, and I was honoured to have played a small part in that,” Stephen tells Culture Trip.

“To be able to say, ‘I can now declare that you are legally husband and husband’ was an amazing feeling and a moment I will never forget. Judging by the loud cheers and clapping, I’m sure their family and friends would say the same thing.” 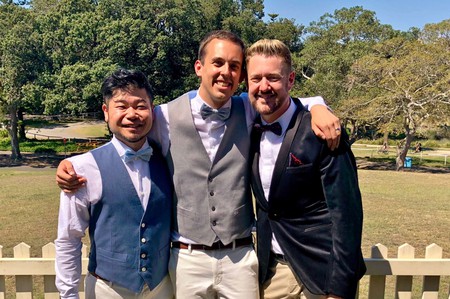 Stephen with Ben and Yoshi | Courtesy of Stephen Lee

Reactionaries promised civilised debate but the ‘No’ campaign obfuscated the survey’s one simple question — “Should the law be changed to allow same-sex couples to marry?” — with red herring arguments about religious freedoms and sex education in schools, as well as bog-standard homophobia.

After an interminable eight-week campaign, Australians voted resoundingly in favour of marriage equality. With a strong turnout of 79.5%, the survey returned 7,817,247 Yes votes (61.6%) and 4,873,987 No votes (38.4%). The result was met with huge public celebrations, including a massive crowd at Sydney’s Prince Alfred Park, where Stephen partied with friends and fellow celebrants. 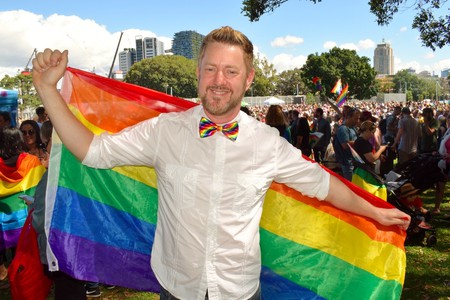 “The joy and excitement that erupted was an amazing thing to be part of, and I am proud and thankful that Australia voted yes,” says Stephen, an active campaigner for equality.

“I married my husband Andrew in the UK back in 2006 before we emigrated here, and to have lived for almost a decade without legal recognition of our marriage in a forward-thinking country like Australia was anachronistic.

“I may not have enjoyed the journey, but I am relieved and heartened that we arrived at the right destination.”

Members of Parliament respected the wishes of the electorate and quickly passed same-sex marriage into law on 7 December 2017. After that one-month waiting period, a flood of weddings kicked off on 9 January 2018.

Australia is now the 26th country to legalise same-sex marriage, lagging embarrassingly behind other developed countries. It’s also only the second to do so via public vote, following Ireland in 2015.

Stephen has been a wedding celebrant for five years and has witnessed his fair share of unique ceremonies, from the sci-fi-loving doctors who walked down the aisle with light sabers to the Elvis fanatics who asked Stephen to dress as ‘The King’ for their big day.

Stephen typically performs about 100 ceremonies a year, and 2018 is set to be busier than usual. He’s already booked in for more than a dozen same-sex weddings in January and February alone — low-key services for gay and lesbian couples who’ve been waiting for years for legal recognition — as well as more elaborate celebrations planned for later in the year. 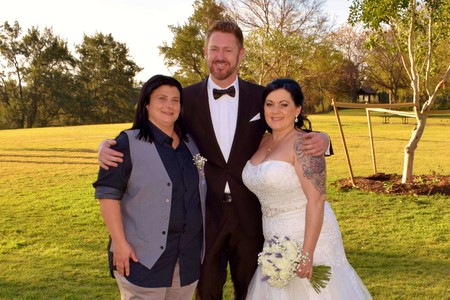 Stephen Lee with Kat and Leanne | Courtesy of Stephen Lee

“Marriage equality is a big win for everyone,” he says.

“Firstly it’s great for couples because they can finally get married on home soil, and those who had a same-sex marriage overseas now have their marriages recognised.

“It’s great for the wedding industry and the wider economy because it’s going to bring a business boom.

“And it’s great for Australia as a whole because it sends out a strong message of equality. Visitors from around the world can now add Australia to the list as a same-sex wedding destination. So I say bring it on!”