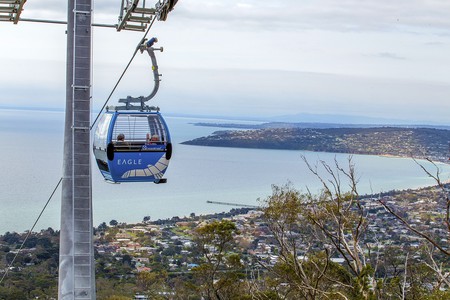 Tourists will soon be able to fly high over the Mornington Peninsula when the newly restored Arthurs Seat Chairlift reopens this December.

Renamed Arthurs Seat Eagle in tribute to the wedge-tailed eagles visible from the lift, the new cable car ride will feature 24 enclosed gondolas capable of seating eight people comfortably. The Eagle is set to open on Saturday, December 3rd, and already, an online bidding war auctioning off the first gondola ride has reached $1100, with proceeds going to the Peninsula Specialist College and Dromana Primary School. 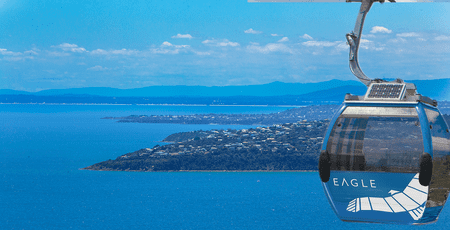 First opened in 1960, Arthurs Seat once attracted 100,000 visitors per year. However, the ride was decommissioned in 2006 after being plagued by several incidents including a pylon collapse in 2003 that injured 18 people, a carriage mishap in 2004 that left an elderly woman with two broken legs, and a mechanical failure in 2006, which saw several people trapped on the chairlift.

After several years of negotiations between council members and Parks Victoria, construction began on a new chairlift in October 2015. The estimated restoration cost was $5 million; however, the bill has now passed $20 million. Overseen by Arthurs Seat CEO Hans Brugman, the project is being built by Austrian company Doppelmayr, who is using 120 tonnes of steel and more than 10,000 metres of electrical cable. Brugman, who used to ride the chairlift as a child, said, ‘The local support is overwhelming and has been so encouraging throughout the project. Everybody I talk with is so excited.’

However, it seems not everyone is supportive of the project. Kylie Greer from the Save our Seat group thinks the project is ‘simply too big’, adding, ‘Arthurs Seat was known for its natural beauty, its Art Deco buildings — including the Arthurs Seat Hotel — and open space, which has now been ruined.’ The entire redevelopment includes the chairlift, located on Arthurs Seat Road in the same position as the old lift, as well as a café with space to seat 100, an interpretive centre and a glass-fronted foyer all finished in clad timber to blend into the surrounding environment. Once up and running, Arthurs Seat Eagle will provide a huge boost to tourism in Dromana and is set to offer 60 new jobs.