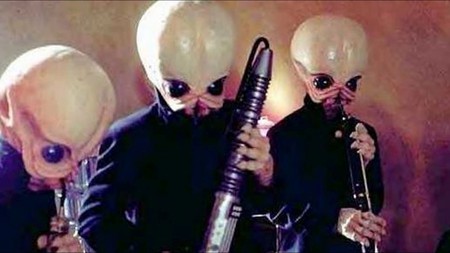 The number one rule when it comes to maintaining a satisfied sex life in a relationship is to keep things fresh and exciting. Whether you’re trying to kick things off with a bang with your new lover or add another log to a sputtering flame before things with your longtime partner burn out, there are plenty of approaches: a bedroom redesign to create the perfect “love den,” exploring fetishes like Shakespeare and spanking, or hitting the road with your sweetheart to get busy in unfamiliar territories. However, thanks to the salacious minds residing in Australia we now have the solution to making every sexy time feel like you have summited Fuck Mountain: Star Wars’ “Cantina Band.”

As noticed by Gizmodo, on Valentine’s Day, Spotify revealed the top date night and sex tracks throughout the year. Honing in on Australia, the top songs when searching for the Feb. 14 holiday or “love” across playlists, the top 10 lists for both featured the usual names: Ed Sheeran, John Legend, Elvis Presley, Beyoncé, Marvin Gaye, Drake, and Justin Bieber.

However, when it came to figuring out what songs were most popular for those who wanted to set aside the niceties and hit the sheets, John Williams’ score with the London Symphony Orchestra was the clear go-to for Australians.

“But for those who want to get right down to business,” Spotify says, “‘Cantina Band’ from the Star Wars: A New Hope Soundtrack, by John Williams, takes out the number one spot on the top sexy time playlists, by a landslide.”

For those unfamiliar with the tune, or (deep sigh) Star Wars in general, Cantina Band is the common name for Figrin D’an and the Modal Nodes, a seven-piece band made up of an alien race known as Biths, who appear during A New Hope‘s bar scene at Chalmun’s Spaceport Cantina in Mos Eisley, a city located on the desert planet Tatooine. While the soundtrack lists the song as “Cantina Band,” it’s true title is “Mad About Me.”

In 1977, the same year as A New Hope‘s release, artist Meco released a disco mashup of “Cantina Band” and the Star Wars main theme that, amazingly, ended up topping the Billboard Hot 100 and went platinum. The song has been covered many times since then, most recently by instrumental metal outfit Galactic Empire.

We think it’s safe to say that in the field of sexual exploration Australia is a galaxy ahead of everyone else.