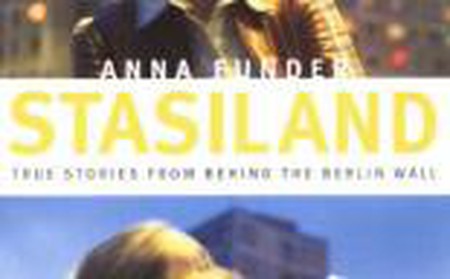 Born in Melbourne, Anna Funder is an award-winning Australian author whose works are renowned for their political comment. Writing both fiction and nonfiction, Funder has attracted international acclaim and controversy for her exploration of Germany’s turbulent history. Matt Young investigates Funder’s two celebrated novels, Stasiland and All That I Am. 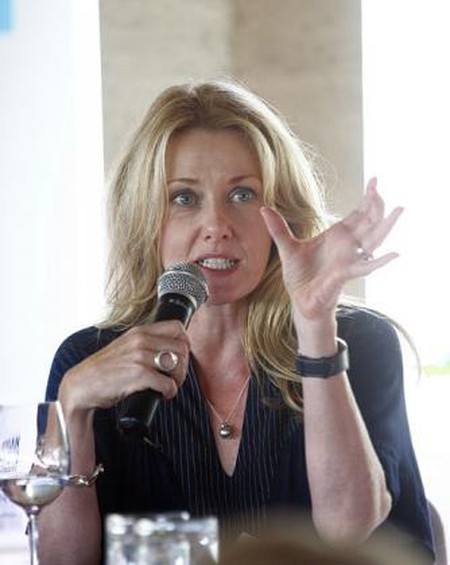 On Anna Funder’s Stasiland, Susan Lever wrote that it “probably hasn’t come into the [Australian] literary purview because it is not about Australia…” Despite both the author’s books to date having German settings and subject matter, it is unfitting to say Funder writes solely about Germany. Rather, she writes about oppression — about the perversion of right and wrong and, perhaps more importantly, the human impulse to resist oppression. “It is really the nature of power to silence dissent,” says Funder, “and it is in the nature of people to want to speak out.” Tirelessly Funder asks of her audience: what would you have done?

Born in Melbourne in 1966, Funder’s childhood was split between Australia, San Francisco and Paris. She studied Law and German at the University of Melbourne, and in 1987 she was awarded the DAAD academic exchange scholarship to study at the Free University of Berlin. After the Berlin Wall came down she returned to Germany as the Writer in Residence at the Australia Centre in the University of Potsdam, and began writing Stasiland.

Funder’s prose style is widely celebrated for it compassion, complexity and elegant poetic descriptions. She approaches her subjects with empathy and elegance in order to expose what she calls “the vast, subterranean world of irrational but controlling truths.” Writer and philosopher Raimond Gaita has praised her writing for its “political and moral intelligence” and “unsentimental truthfulness.” 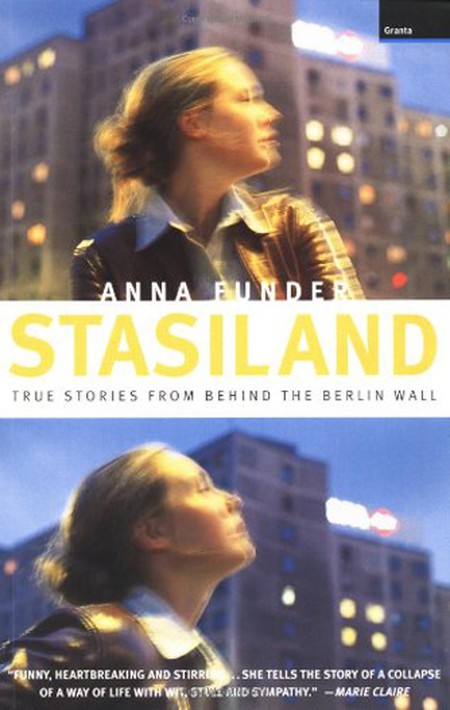 Published in 2003, Stasiland is a literary non-fiction book about the German Democratic Republic, its citizens and its internal state security service, the Stasi. More aptly, it’s about the people who suffered at the hands of the Stasi and those that worked within its ranks. It follows the writer’s exploits across East Germany after she places an advertisement in the personal columns of a Potsdam newspaper, trying to find first-hand accounts of a period of history that Germany, as a nation, has struggled to comprehend.

The landscape of Funder’s Germany is haunted by a kind of post-unification shock: cranes pick over building sites “like wounds”; asbestos-laden government buildings are demolished, still toxic even after the regime has collapsed; she describes the East Side Gallery as being like “a gaudy headstone”, and the puzzle women in Nuremberg fastidiously reassembling shredded files and documents. She charts a nation trying to come to terms with its past, however, Funder never intended to write a non-fiction book. “I started to write a novel and it was just execrable,” she said at the Melbourne Writers’ Festival in 2011, “because the first task of a novel is to make a believable world in which believable characters behave in believable ways. And in East Germany that just wasn’t going to be possible.” The oddities of the Stasi were too odd for fiction. Accounts of agents breaking into people’s homes to purloin their underwear and put them in jars as a “smell record” seems barely plausible in a pulp spy novel.

Funder follows the methodology of the creative non-fiction genre’s vanguards, such as Truman Capote and John Hersey. She promotes the human element of history to the forefront, leaving the greater historical forces and players to provide context rather than content. However, when she delves into East German politics, she does so with absurdity and wit; she describes the thought process behind the building of the Berlin Wall as having “something of the prophylactic about it.”

Time and memory are dominant themes in Stasiland. While working at a television company in Berlin she receives a letter from a former-East German citizen: ‘Why are some things easier to remember the more time has passed since they occurred?’ Time has both measure and volume in Funder’s East Germany – a weight and cost: the burden of living 40 years under an oppressive regime, the loss of years spent in political prisons for opposing the regime, and the lives lost trying to flee it. Funder describes German babies ‘having their input of food and their output in feces weighed, in some attempt to measure life.’ According to Funder, life under the shadow of the Stasi is not forgotten, but just not spoken about.

The name itself is a reference to Lewis Carroll’s Alice’s Adventures in Wonderland, with allusions to the children’s classic dotted throughout. The book opens with Funder, hungover, descending the stairs of the Alexanderplatz underground train station — making her way down the rabbit hole. She paints the GDR’s cultish echelons with an ironic tone, quoting the Minister for State Security, Enrich Mielke, in a particularly Queen of Hearts-esque moment: ‘All this blithering about to execute or not to execute… Execute! And, when necessary, without a court judgement.’ Similarly she describes the infamous portraits of Enrich Honecker, the long-serving Head of State, evoking a sense of his Cheshire cat-like grin. At one stage she drolly states to a work colleague, “I’ve been having Adventures in Stasiland.”

On its release the book was well received by English-speaking audiences, and won the BBC Four Samuel Johnson Prize for Non-Fiction in 2004. It was published in the USA, UK and Australia, however, the book struggled to find a publisher in Germany. When it did find a German publisher its reception was particularly frosty. Before leaving on a two-week promotional tour of Germany, she received an email from her publicist in Hamburg warning her, “Wear a flak jacket.” Many former-East Germans were openly hostile towards her, claiming an outsider had no right to write their story. Responding to claims the book was a voyeuristic evaluation of post-GDR Germany, Funder wrote in the UK’s Telegraph that vestiges of the regime’s discourse still remained: “to question someone’s right to speak out or write about something is a legacy of totalitarianism: there is still a sense that only certain people should be allowed to write about and publish certain things.” 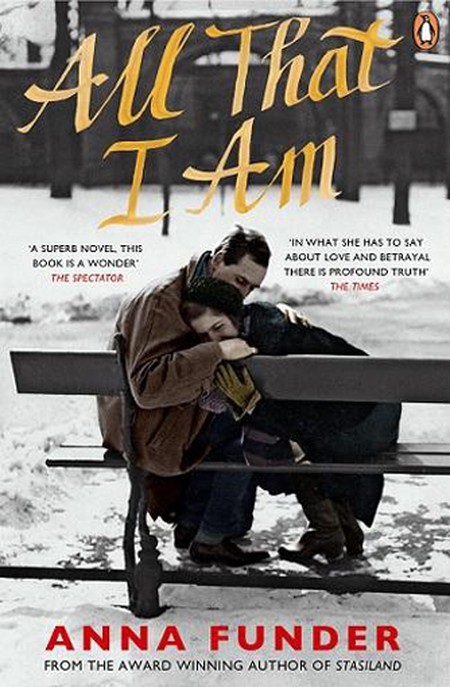 Several years after Stasiland, Funder returned with her second book, and first foray into fiction. Set against the backdrop of the rise of Hitler and outbreak of World War II, All That I Am follows the lives of four left-wing German activists as they work to oppose Nazism. It is a novel that transcends decades, continents and viewpoints – moving between the internal monologues and memories of Ruth Becker, an octogenarian living in Sydney in 2002, and depressed revolutionary and hermitic playwright, Ernst Toller, in a New York hotel in 1939. Their seemingly disparate lives are linked by the heroic and paradoxical Dora Fabian.

The story is told from two angles, with Dora at the center, acting as conduit between worlds, eras and people. To Ruth, Dora is her cousin; to Toller, his lover. Both love her in vastly different yet similarly fervent ways, providing a multifaceted portrait of a highly complex and enigmatic character. Perhaps due to Stasiland being a literary non-fiction novel, there is a misconception that the characters and story in All That I Am remain true to fact. While inspired by real people and events (Toller’s character is based on the German playwright of the same name, and English poet W. H. Auden is fictionalized in the book), the story is an invention. Ruth Blutt, on whom Ruth Becker is based, tutored Funder as a young university student in German. The author sculpted the story around Ruth Blutt’s anecdotes. However, to Funder the struggle was to get the book “morally right” as opposed to factually accurate. As a result, Funder’s political and moral conscience shines through.

George Orwell said, ‘no book is genuinely free from political bias. The opinion that art should have nothing to do with politics is itself a political attitude.’ Funder’s writing, although clearly preoccupied with universally human stories and themes, is doused in political overtones. The scope of the book’s narrative and setting is cosmopolitan, however her writing is informed by an Australian political context. At a Sydney Writers’ Festival event in 2012, Funder asserted the novel’s subplot concerning the St Louis – the ship on which Jewish refugees fled Europe for Cuba — was a metaphor for the refugee policy of the then-prime minister, John Howard, of turning asylum seeker boats back out to sea before they reached Australia. “They’re hardly going to turn away a whole ship of people… now, are they?” Is Toller’s reaction to news of the St Louis, a statement stained with irony when framed in an Australian context. Her criticism of Australian politics has also been more open. Upon winning the 2012 Miles Franklin Award, she attacked the Queensland State Government for axing the Queensland Premier’s Literary Awards. “I have spent my professional life studying totalitarian regimes and the brave people who speak out against them,” she said in a TV interview. “And the first thing that someone with dictatorial inclinations does is to silence the writers and the journalists.” If Australia’s literary commentators decline to acknowledge the legitimacy of Funder’s work on the basis that it is not “about Australia,” they are clearly not looking hard enough.