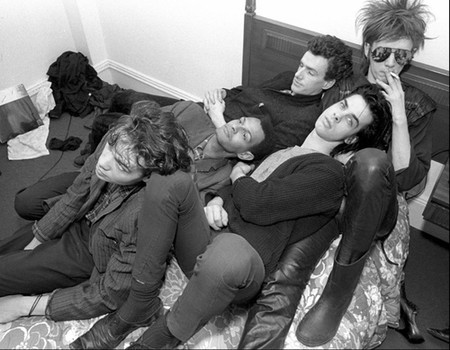 Having released 16 albums throughout a career spanning 32 years, it’s almost disrespectful to condense the work of Victorian-born Nick Cave and his band the Bad Seeds to a mere 10 songs. So instead of looking at this as just another top 10 list, take it as a beginner’s guide to the Prince of Darkness and his ability to write songs rich in narrative, and deliver them with an all-consuming believability of a man bewitched by poetry.

Released in 1997 as the first single off Nick Cave and The Bad Seeds’ tenth studio album The Boatman’s Call, ‘Into My Arms’ is a torch song reminiscent of church piano hymns which makes sense considering that we’re talking about the high priest of rock. Written about the demise of his long term relationship with Vivien Carneiro and his failed affair with PJ Harvey, Cave delicately admits to his lack of faith and belief in God but can accept the contrasting views of his partner. The song opens with the line ‘I don’t believe in an interventionist God, but I know, darling, that you do’. Cave performed the ballad at the funeral of INXS frontman Michael Hutchence.

Even those unfamiliar with Nick Cave’s music will recognise this song from the Barossa Valley commercial, and fans of the movie Scream will have heard it throughout the original trilogy. Released in 1994 the song appears on the Let Love In album and the original clocks in at just over six minutes. The title Red Right Hand was taken from John Milton’s biblical epic, blank verse poem Paradise Lost from the line ‘Should intermitted vengeance arm again/ His red right hand to plague us?/ What if all her stores were opened, and this firmament/ Of Hell should spout her cataracts of fire.’

In ‘The Mercy Seat’, Nick Cave inhabits a character condemned to the electric chair in the same way a method actor is swallowed by the role. In the Bible the ‘Mercy Seat’ refers to the lid of the Ark of the Covenant; however in the song it refers to the throne of God and the electric chair. The repetitive lyrics ‘And the mercy seat is waiting, and I think my head is burning, and in a way I’m yearning, to be done with all this measuring of truth. An eye for an eye and a tooth for a tooth and anyway I told the truth, and I’m not afraid to die.’ pulsate as the song escalates toward the character’s death as if to emulate a racing heartbeat. Written in 1988 for the Tender Prey album, the song has been covered by Johnny Cash among others.

Appearing on the Henry’s Dream album, ‘Straight To You’ is on the upbeat side of Nick Cave’s rhythmic scale and is underscored by an organ. As usual, the lyrics are rich with visuals including ‘towers of ivory are crumbling’, ‘chariots of angels are colliding’ and ‘the sky will throw thunderbolts and sparks’, which work as motifs for the collapse of a relationship. In 2014 NME named the song as one of the 500 Greatest Songs of All Time.

There She Goes, My Beautiful World

It’s ironic that a song about the numbness of writer’s block would, in turn, produce one of Nick Cave’s most well-rounded tunes. The song is off the band’s 2004 double album Abattoir Blues / The Lyre of Orpheus with Cave accompanied for a generous portion of the song by a gospel choir which adds to the song’s powerful deliverance. Cave mentions several writers including John Willmot, Nabokov, Johnny Thunders, Karl Marx, Gauguin, Philip Larkin and Dylan Thomas and pleads with a higher power to give him words to write.

After the morbidly gritty rock album Tender Prey fans were expecting more Mercy Seat electric chair anthems from the follow-up 1992 album The Good Son. Instead, the band entered into an era of tenderness sparked by Nick Cave’s new relationship with Vivien Carneiro. At the time of release the album was criticized by fans but has since gained a cult-like appreciation, and in 2001 APRA named the song as one of the Top 30 Australian Songs of All Time firmly positioning it as one of Cave’s most iconic love songs.

Do You Love Me

In 1994 Nick Cave and the Bad Seeds released the album Let Love In which features the song ‘Do You Love Me’. The track balances the band’s signature demonically tormented sound while easing fans into a new era. The rolling piano arrangements set the mood as Cave drags the cryptic lyrics across the verses and almost slurs through the chorus with a late-night-after-a-few-drinks sort of desperation. NME ranked ‘Do You Love Me’ at number 35 on 1994’s Singles of the Year chart and it made the top 20 on Spain’s Rock de Lux Songs of the Year chart.

The year after Elvis was born a storm leveled over 200 homes in his birthplace of Tupelo, Mississippi – Elvis was among the survivors. These events inspired John Lee Hooker’s song ‘Tupelo’ which in turn inspired Nick Cave who explains the biblically epic storm as a direct result of the birth of Elvis and claims that not even Elvis’ twin brother, who was stillborn 35 minutes prior to Elvis, was able to survive the King’s arrival. The ragged song was the band’s second single and was the only single released from their second album The Firstborn Is Dead – also inspired by Elvis’ stillborn brother and features a tribute to Lee Belly’s ‘looky looky yonder.’

Nick Cave and the Bad Seeds have never shied away from cover songs and their most iconic cover is of the old American folk song ‘Stagger Lee’ which tells the story of the real-life murder of Billy Lyons by Stag Lee Shelton in 1895 St. Louis, Missouri. Cave’s 1996 version slithers through a narrative so grisly you’ll think it’s a Tarantino film. The lyrics are dense with careless murder and crude violence. The song appears on the band’s ninth studio album Murder Ballads and has also been covered by the likes of Cab Calloway, Tina Turner and James Brown.

Where the Wild Roses Grow

For years Nick Cave attempted to write a song he felt was worthy of Kylie Minogue and after being inspired by the Appalachian murder ballad ‘Down In The Willow Garden’ he wrote ‘Where the Wild Roses Grow’ which Cave said ‘is a dialogue between a killer and his victim.’ The song is from the 1996 album Murder Ballads and peaked at number three in Norway, reached the top five in Australia and entered the top 20 in the UK, Ireland, Germany and New Zealand. The melody is fluid and floats along almost in slow motion with a tempo of 56 beats per minute, and the haunting lyrics are delicately delivered by both Cave and Minogue.