An Introduction to Kylie Minogue in 12 Songs 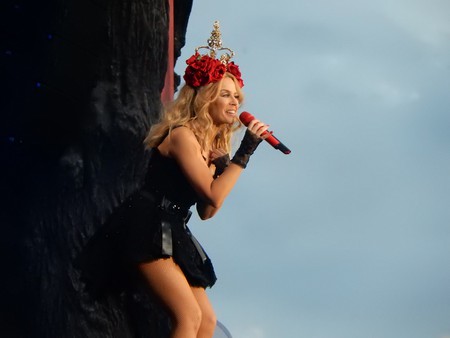 Hailing from Camberwell, Melbourne, Kylie Minogue rose to fame as Charlene on Neighbours and went on to establish herself as the Princess of Pop. Recognised as one of the highest selling Australian artists of all time, Kylie has released 13 albums, won 17 ARIA Awards as well as a Grammy Award and six Logies. If you’re not already a fan, here are 12 of her best songs to get you started.

Written in 1962 by Carole King and Gerry Goffin, “The Loco-Motion” has been covered by numerous recording artists including Kylie Minogue who released the song as her debut single in 1987, with a global release in 1988. The song peaked at number three on the US Billboard Hot 100 and spent seven weeks at number one in Australia becoming the country’s highest-selling single for the 1980s. Scenes from the accompanying music video were filmed at Essendon Airport in Melbourne. The song won the ARIA Award for Highest Selling Single.

I Should Be So Lucky

The first single off her debut album Kylie “I Should Be So Lucky” was written in forty minutes by Mick Stock who assumed that Kylie must be unlucky in love despite being a famous soap opera star. The producers Stock Aitken Waterman didn’t even know they were scheduled to work with her until she turned up at the studio in Britain. The song became her first UK number one single.

Better the Devil You Know

The lead single on Kylie’s third studio album Rhythm of Love was released in 1990 and is recognised as the song that reinvented her image from girl next door to mature and independent. Lyrically “Better the Devil You Know” reflects the new phase in Kylie’s life as she announced her departure from Neighbours and was no longer dating co-star Jason Donovan, instead INXS front man Michael Hutchence. The song is one of Kylie’s signature singles and is performed on all her tours.

A prime example of Kylie’s willingness to experiment musically, “Confide in Me” merges dance-pop with Middle Eastern instrumentation. The seductive lyrics suggest manipulation and an internal power struggle, alluding to an inhibiting partnership with previous producers and record label PWL. The song was released in 1994 as the lead single on her fifth self-titled album and went to become number one in Australia.

Written by Kylie in response to the British tabloids who were fixated on her weight and personal life, “Did It Again” is a self-critical song off the album, Impossible Princess. Furthering the plot is the music video directed by Petro Romanhi, which features four versions of Kylie: Sex Kylie, Cute Kylie, Indie Kylie and Dance Kylie fighting with each other.

Following Impossible Princess, the song “Spinning Around” off the album Light Years marked Kylie’s pivotal return to pop music with lyrics of reinvention. Originally intended for Paula Abdul, the song launched the career of songwriter Kara DioGuardi who didn’t know who Kylie was at the time. The accompanying music video features Kylie’s iconic gold hot pants which were purchased for 50 pence at the Camberwell Market. The song won the 2000 Aria Award for Best Pop Release.

The follow up to “Spinning Around,” “On a Night Like This” was released in September 2000. A month later, she performed the song along with ABBA’s “Dancing Queen” at the 2000 Sydney Olympics closing ceremony. The dance track went to number one in Australia and number two in the UK. The music video was filmed in Monte Carlo and took inspiration from Martin Scorsese’s Casino.

Can’t Get You Out of My Head

Cementing her position as the Princess of Pop, “Can’t Get You Out of My Head” off the album Fever went to number one in every European country (except Finland), as well as Australia, Canada, and New Zealand and reached number seven on the US Billboard Hot 100. The song is noted as Kylie’s signature song and is her highest selling single as well as being one of the best-selling singles of all time. Lyrically, the song speaks of obsession which lends itself to the contagious “la la la” hook and pulsing beat. The song won two ARIAS.

The second single off Fever, “In Your Eyes” furthers Kylie’s ongoing lyrical motif of sexual temptation with nu-disco and Europop influences. The catchy tune debuted at number one in Australia after a delayed released due to the popularity of her previous single. “In Your Eyes” also hit number three in the UK and reached the top five throughout Europe.

Following the success of the previous two singles off the album Fever, Minogue’s label Parlophone released “Love at First Sight” in 2002. The funky Euro-dance song brought Kylie her first Grammy nomination for Best Dance Recording in 2003. The song reached number three and number two in Australia and the UK respectively and charted in the top ten in Canada and throughout Europe.

Come into My World

The fourth and final single from Fever “Come into My World” is a mid-tempo nu-disco track which gave Kylie her first and only Grammy Award for Best Dance recording in 2004. “Come into My World” spent nine weeks on the Australian charts peaking at number four and was certified Gold by ARIA. The music video featuring identical Kylies caught in a time-loop in Paris, France.

A last minute addition to Kylie’s eleventh studio album Aphrodite released in 2010, “All The Lovers” became the standout track on the record with commercial success in Australia and throughout Europe, peaking at number three in the UK. The euphoric nature of the song is emphasised through Kylie’s breathy vocals as she proclaims that previous relationships don’t compare to her current lovers. She also mentioned universal love as a theme for the track.

If you liked this list, why not read An Introduction to Nick Cave and The Bad Seeds in 10 Songs?