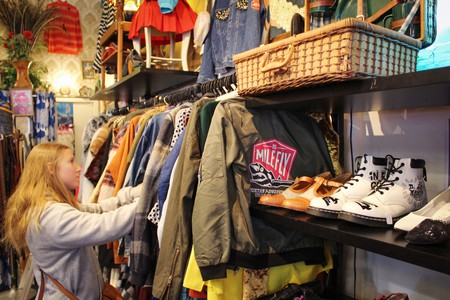 Residents of rival cities mock Melbourne for its famously fickle weather, but vintage fashion connoisseur Martin Fella sees a silver lining on all those clouds.

“I think Melbourne has become the fashion capital of Australia due to our climate,” Martin Fella tells Culture Trip from his Queensberry Street boutique. “Unlike Sydney, we don’t get the opportunity to spend nine months of the year on the beach. As a result, our arts and fashion communities have evolved into what they are today. And with a colder climate, there’s also the opportunity to layer up over winter, which Melburnians love!” 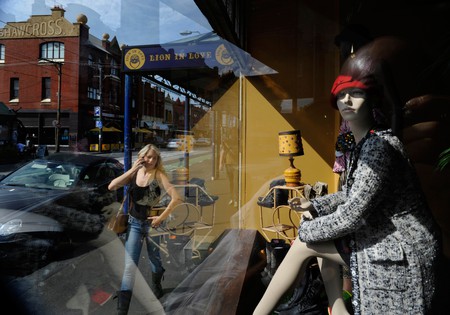 Fella has worked in the fashion industry for three decades, originally handcrafting jewellery for some of Australia’s top designer stores. He opened a boutique two decades ago, but with cheap imported accessories flooding the market and a penchant for pre-loved clothing, he devoted the entire space to vintage in 2007.

“It’s tough for independent retailers due to ever-increasing rents and having to compete with online stores and the world of fast fashion,” Fella explains. “Fortunately, those independent retailers offering something different to the norm are the ones who are able to survive. In a time where many fashion retailers have to close, we’re finding that business is growing at an incredible rate.”

Fella’s customers aren’t just attracted to the bargain prices on designer labels – they’re thinking of Mother Nature, too. Denizens of a town as progressive as Melbourne are looking for every opportunity to recycle, including their wardrobe.

“People are beginning to think more ethically and sustainably when deciding what to wear,” Fella says. “Fast fashion takes an incredible toll on the environment, and consumers are not dumb.”

Here are the top spots across Melbourne to sniff out sustainable, stylish and sensibly priced fashion – starting with Fella’s own boutique.

North Melbourne is no retail hub, but savvy shoppers come out of their way to visit Fella on Queensberry Street. “I’ve been amazed at how many people find this little store, which is not exactly in a major shopping area of Melbourne,” he tells Culture Trip. “My clientele is far and wide, male and female. I get lots of international customers as well as the odd celebrity from overseas as well as local. I quite often get super keen international vintage shoppers who arrive here straight from the airport.” The appeal is two levels of pre-loved clothing for men and women, plus unique T-shirts, classic American Levi’s, retro homewares and woollen jumpers. But Fella’s speciality is designer bags, with labels such as Gucci, Louis Vuitton, Vivienne Westwood, Celine, Prada, Cartier, Chloe and Salvatore Ferragamo at a fraction of their original retail price. 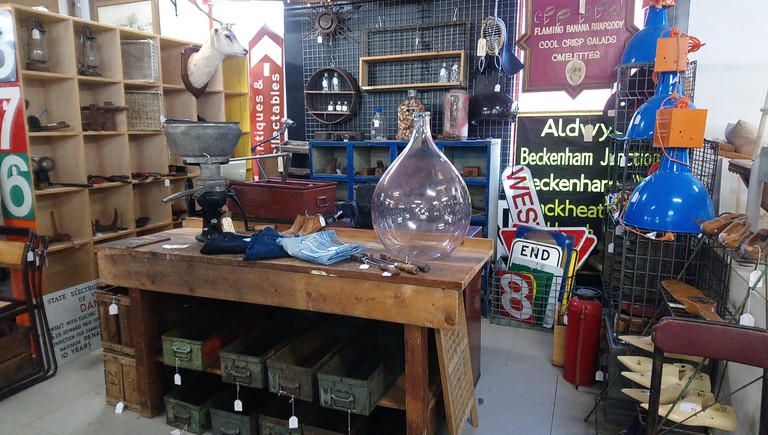 The Lost and Found Market began life in an abandoned nightclub in Collingwood before relocating to Fitzroy in 2018 – and this mammoth Brunswick Street warehouse is brimming with second-hand items trying to find a new home. There are toys, furniture, kitchenware, books, sports gear, lighting and, of course, clothes, spanning every decade from the 1940s until today. This sprawling marketplace is made up of 60 stallholders, including one familiar face. “We also have a space here,” Fella says. “It’s more of a market style with loads of different stalls selling the widest range of all things vintage.”

The glass windows that open up onto Smith Street show off the dazzling rainbow of retro fabrics that light up this minimalist boutique in the vintage fashion hotspot of Fitzroy. Shappere specialises in repurposing old material into beautiful contemporary garments, such as the racks of classic dresses for women and loud party shirts for men. There are loads of leather pieces on offer, too, including bomber jackets fashioned out of recycled hide, as well as belts, handbags and bins overflowing with boots. 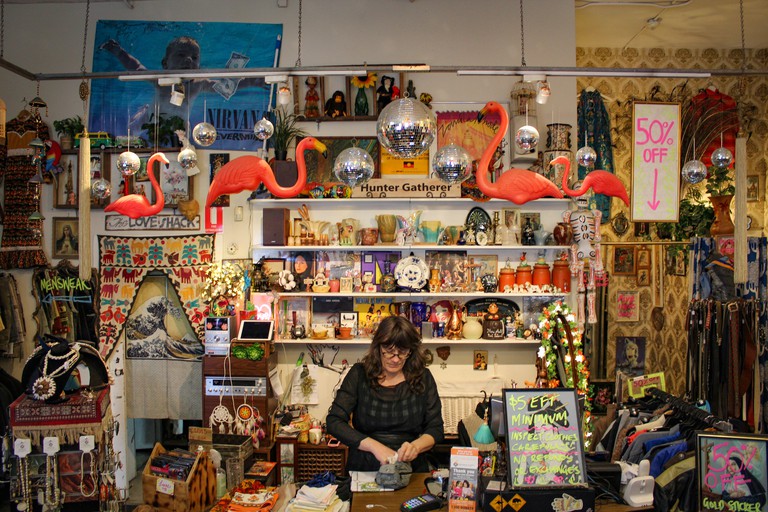 Welcome to Melbourne’s coolest non-profit op shop. The Brotherhood of St Laurence has been helping the Fitzroy community since 1933, and it continues its work in this hipster haven today, raising funds through this volunteer-run second-hand store on Brunswick Street. The shelves are populated by hand-picked pieces plus the best selection of the thousands of donations the Brotherhood receives, with a particularly strong assortment of well-priced womenswear. Hunter Gatherer’s store manager Sam Willersdorf says: “Apart from the incredibly unique stock mix, we have weekly deliveries to ensure there’s always something new and exciting to find. You’re also supporting our work in supporting disadvantaged Australians to build better lives for themselves.”

The string of upscale boutiques that line Chapel Street occupy some of Melbourne’s most exclusive real estate, but this kaleidoscopic second-hand store smashes the mould. Since it opened its doors in 1996, Shag has paid homage to all things from the 1970s and ’80s – think oversized jumpers, fur jackets, shoulder pads, animal prints and technicolour everything. “It does an amazing mix of old and new,” Martin explains. “And it has an impeccable sense of flamboyant and fun style.” As well as the flagship Windsor location, Shag has a second store on Smith Street in Collingwood, too.

Bargain hunters can skip this high-end consignment store, which hand-picks a luxurious range of European and Japanese designer apparel, particularly limited-edition and one-off pieces. After launching a couture and prêt-à-porter collection at Melbourne Spring Fashion Week in 2009, Madam Virtue and Co has become an institution on Crossley Street in the central business district for its formidable Japanese assortment – including labels such as Issey Miyake, Tsumori Chisato, Yohji Yamamoto and Comme des Garçons – and a growing number of bridal gowns. The immaculate garments aren’t cheap, but Fella insists they’re worth every cent. “Practically new, super high-end clothing in a tiny shop in a tiny laneway in the centre of Melbourne.”

Out of the Closet

Out of the Closet (OTC) has been around so long that items that were brand new when the store opened are now retro pieces hanging on its hooks. One of Melbourne’s original vintage stores, OTC has been a fixture on Fitzroy’s Brunswick Street since 1989, peddling a dependable selection of top-notch pre-loved menswear and womenswear at better prices than many of its competitors. On top of this three-decade-old institution, OTC’s city centre basement boutique boasts a range of vinyl records for music buffs to thumb through, as well as a costume hire service. 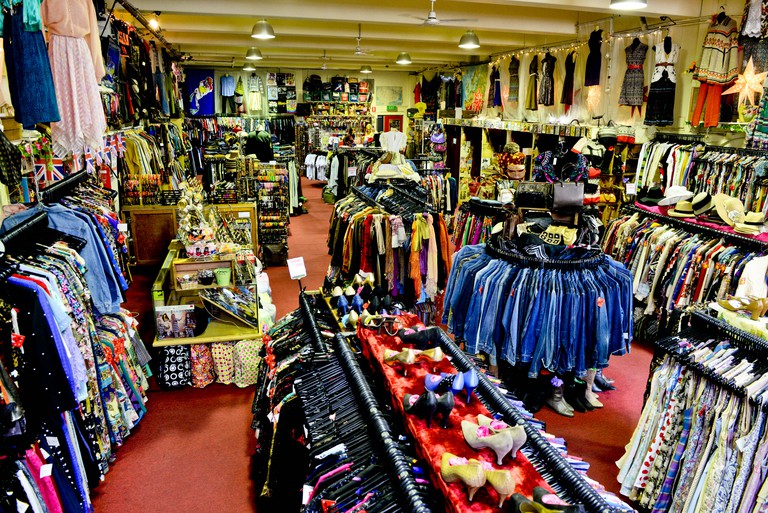 Climb the stairs off Flinders Lane into Swanston Street’s heritage Nicholas Building to discover the largest vintage store in the whole of Australia. Such an enormous collection naturally straddles every era and style, from 1940s floral dresses to 1990s NFL jerseys. Music fans, in particular, have plenty to peruse in the Rockstar room, which houses a galaxy of old band T-shirts, comics, albums and other pop-culture trinkets. The quality is good, with the price tags reflecting that, but there’s also a $20-or-less section for those on a budget.

A polychromatic display shines over Smith Street from Vintage Garage, another marketplace of 40-plus dealers and designers showing off their wares to the cutting-edge Collingwood crowd. Fans of the ’50s will love trawling through the rockabilly dresses and period jackets, while festival-goers can also find all the sequinned jumpsuits and glitter-caked jewellery they could ever want. The centrepiece, though, is the red convertible that stands as the sales desk.

In an arcade beneath RetroStar, neon signs guide shoppers into one of the CBD’s most sophisticated second-hand boutiques. Vintage Sole began life in 2005 as an offshoot of a shoe repair shop, hence the name, before exploding into three locations across Melbourne – this one just off Swanston Street plus sister stores in Fitzroy and Windsor. Vintage Sole balances retro staples such as vintage Levi’s, 1960s dresses, tassel handbags and ’70s flares with seasonal trends like ’90s-style streetwear, as well as a wide array of shoes and sneakers that live up to the moniker.

Californian Ashley Tell worked as a model before arriving in Australia to dive into the vintage fashion game, and the racks of her store are filled with garments she’s picked up on trips back to her home country. “This great store is in Richmond, where I live,” Martin Fella says. “And it’s got the biggest and best collection of American vintage.” Located near the corner of Church Street and Bridge Road in the middle of this trendy inner-city neighbourhood, Global Vintage Collective’s showroom (plus the piles of clothes in the warehouse out the back) is a treasure trove of reasonably priced streetwear and denim – and the occasional pair of cowboy boots.