Although Western Australia’s capital of Perth is oft-referred to as the most isolated city in the world, the state itself is not only the largest in Australia – covering over 2.5 million square kilometres – it would be roughly tenth largest country in the world if it was an entity unto itself. With this staggering size in mind, arts and culture are taking over the state, providing the public with both spiritual and contemporary art experiences.

An array of festivals celebrate all aspects of art and culture. For those seeking all things fashion, head to the annual Telstra Perth Fashion Festival, which features over 30 world-class fashion events that celebrate the best of local talent alongside both nationally and internationally recognised designers. However, if getting back to nature is more your scene, then the multi-cultural community of Newman will help you discover the outback at their Outback Fusion Festival. Locals showcase their cooking, craft, artwork, dancing, singing and storytelling abilities across three days of events.

Make your way to Broome for the Shinju Matsuri Festival, where visitors are encouraged to explore ‘A View To Asia’ in their interactive exhibition showcasing both sculptures and installations from WA artists along Cable Beach. Interpreting the nature of the town and its links to Asia, this exhibition is accompanied by the Floating Lantern Festival, inspiring attendees to take in a ‘special moment of reflection, recognition and remembrance’ in launching your own lantern into the tide at sunset, whilst further south, the annual WA Circus Festival will invite you to live and breathe everything circus.

Throughout Western Australia there are many art galleries and museums that will appeal to all interests. From exploring works by both contemporary and historic Australian artists at the Art Gallery of Western Australia, to the ever-changing exhibitions of contemporary international pop and modern folk at Outré Gallery, and discovering the many great artists who have graced our stages at the Museum of Performing Arts, there is never a dull day in the galleries.

Many galleries featuring exclusively Australian artists support the Aboriginal Australians, promising to take you on a spiritual journey of discovery. Whether you explore the ancient culture and traditions of each tribe within the state through their artwork, hear their struggles and accomplishments as a culture and as artists, or meet one of the many talented locals, you can visit an established gallery or a community centre in the local towns. 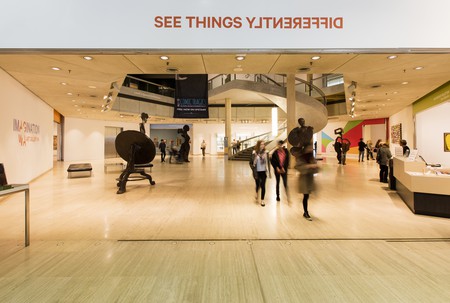 With a vast array of towns and cities throughout the state, there are several creative and natural hotspots that promise to influence and inspire you in differing ways. The creative and artistic community of Fremantle invites you to explore the street art, get involved in street performances, and discover many hidden places that are bound to help you discover your spiritual side. A journey to both of the agricultural regions of the Swan Valley and Margaret River provides a rare opportunity to take in natural beauty not found elsewhere in the state.

Heading north of the capital, Perth, you will come across the heavily spiritual place of the Pinnacles, where you can explore the natural and cultural heritage of each limestone formation dating back 6,000 years. With surrounding sites including breathtaking beaches and the historic Stromatolites, there is something to influence your creativity no matter where you look. Moving even further north will take you to ‘one of the world’s last great wilderness regions’ that meets the Indian Ocean. Heading to Cable Beach in Broome is a must for any local or visitor to see the richness of colours – ‘the redness of the dirt, the impossibly turquoise sea, the whitest of sands’ all combining with the remarkable sunset – trust us, it’s a once-in-a-lifetime experience. The locals here use the expression warany-jarri liyan yargarrgi (‘to agree with one spirit, one feeling and one mind’) in describing this town. What better way to encourage your creative flow? 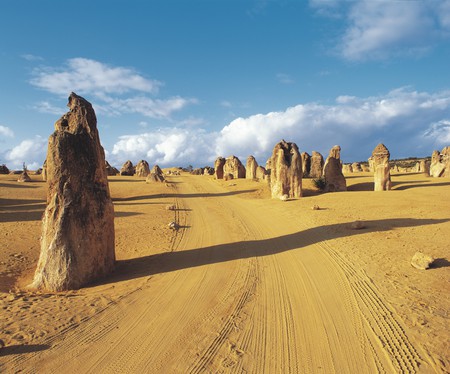 Take in the talents of Western Australia with a journey to one of the many performing arts venues across the state. From a variety of dance genres – including ballet, hip-hop, musical and jazz – to theatre and music there is something to please even those trained in the field. Whilst Perth’s very own His Majesty’s Theatre invites performers such as the Western Australian Ballet and the State Theatre Centre of WA to perform at, they also play host to comedians, musicians, cultural performances and more visiting.

If you can’t make it to the big city for a performance, there are many local and travelling shows and artists that visit some of the states smaller in scale, but still large centres including the Mandurah Performing Arts and the Albany Entertainment Centre. However, if you are looking for something more low-key, then a visit to any Town Hall, Centre or school is bound to bring you a sense of nostalgia and closeness in the more intimate venues.

Public art is quickly taking over the state with mature artists that have been around for years, as well some newer editions to the scene. The most iconic figure is Eliza on Matilda Bay; whilst not many people may spot her with the iconic Boat Shed along the Swan River, she is constantly supporting teams, causes and traditions with locals dressing her up on a daily to weekly basis (depending on the occasion). Another long-time popular installation is the Cenotaph in Kings Park, standing in remembrance and encouraging those passing by to take moment to reflect.

More recent editions to the state include the colloquially named ‘The Cactus’ – actually named ‘Grow Your Own’ – in the Perth city centre, opposite the train station, with Spanda, Bessie Rischbieth Statue and the First Contact statue in the newly formed Elizabeth Quay and the Roundabout on Marine Parade. Whether passing by, or actively seeking these, there are hundreds to be explored. 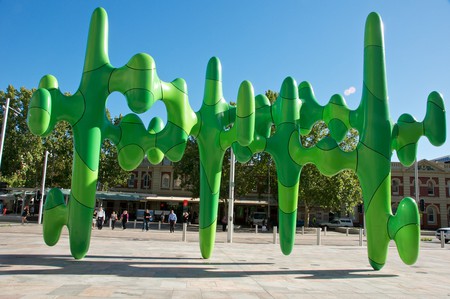 'Grow Your Own' (colloquially named 'The Cactus') | © Greg Neate / Flickr

Across Western Australia there are many local and visiting artists sharing their talents through street art. Although there are too many to list, Streets of Perth have begun to share their art findings, ranging from the latest public murals to sculptures. With Alice in Wonderland in Fremantle and mermaids in Victoria Park, to deadly animals taking over the CBD, animals and characters with multiple heads reign in Subiaco and neon works light up Northbridge.

Although they have only begun covering the city and surroundings, more pop up every day to include discoveries in towns across the state, including the spiritual murals of Noongar painters in Bunbury, a mural commemorating the Anzac Centenary in Albany and a funky turkey in Denmark. 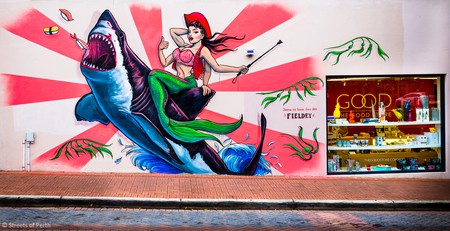 Victoria Park, Artist: Fieldey (2015) | Courtesy of Streets of Perth
Give us feedback