How Albert Namatjira Became an Icon for Indigenous Rights 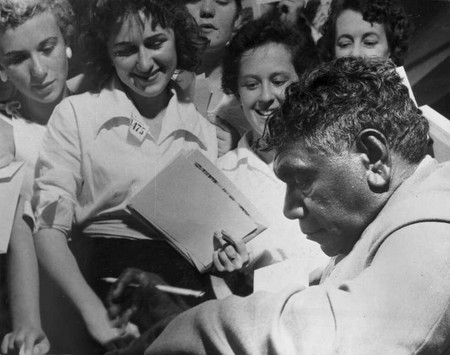 How did one of Australia’s greatest artists and Indigenous trailblazers meet such a tragic, untimely end?

Before a public vote in 1967, Indigenous Australians were not considered citizens of the land their culture had occupied for more than 60,000 years. They couldn’t vote. They couldn’t access important welfare benefits. They weren’t counted in the census. One notable exception, however, was Albert Namatjira: Arrernte man, painter and the first Indigenous person to be granted Australian citizenship. Sadly, the final chapter of Namatjira’s story is a heartbreaking one.

Namatjira’s fusion of Western-style artistic techniques with Australian subject matter and Indigenous sacred sites was feted as evidence of the government’s assimilation policies during that era. Remarkably, though, Namatjira could not buy a home for his family despite his commercial success because of the colour of his skin — property ownership was one of the many archaic restrictions placed on Australia’s Indigenous people throughout history. 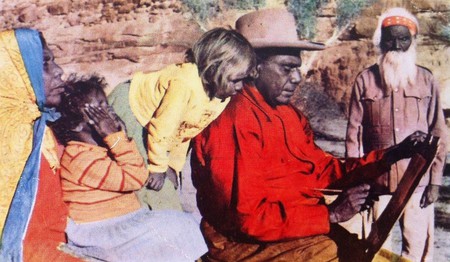 Albert Namatjira at home with his family | © Aussie Mobs / Flickr

The Australian public was outraged that one of its favourite artists was treated like a second-class citizen and Namatjira began to speak out for his rights: “I think I should have full rights”, he told local newspaper the Centralian Advocate in 1952. “I am 50 years old now and there are many things I would like to do and can’t without citizenship rights.”

Indigenous and non-Indigenous Australians demanded the government lift the regulations that made Namatjira a ward of the state and their calls were answered. Namatjira was granted Australian citizenship in 1957, more than a decade before the same basic rights — to vote, to own property, to drink alcohol — were extended to the rest of the country’s Indigenous population following the landmark 1967 referendum.

Although Namatjira was now legally allowed to drink alcohol, his friends and family were not. Tragically, when a young woman died at a party at Namatjira’s camp at Morris Soak in Alice Springs, the acclaimed artist was charged with supplying alcohol to an Aboriginal person and sentenced to six months at Papunya Native Reserve.

The punitive sentence exposed a glaring inequality in the legislation’s treatment of Aboriginal people — sharing a drink was perfectly legal for white Australians, but a criminal offence for the Indigenous community. While Namatjira’s art bridged the gap between white and black Australia, this absurd punishment exposed a deep chasm in the eyes of the law.

Namatjira was released after two months, but he lost interest in painting after this incident. He suffered a heart attack in 1959, then died of heart disease complicated by pneumonia on 8 August that year. Mere months after blazing a trail as the first Indigenous person to be granted Australian citizenship, Namatjira had passed away aged just 57.

Albert Namatjira wasn’t the first Indigenous artist to work in the European style, but he is certainly the most iconic. His richly detailed watercolours of distinctly Central Australian landscapes were a shift from the Indigenous art that white audiences were accustomed to seeing, making it groundbreaking for the era. Instead of patterns, totems and symbols, Namatjira portrayed the ochre-red dust of the outback, dramatic Northern Territory gorges and his signature white ghost gum trees in a way that was familiar to European Australians, making his pieces extremely popular across the country.

“What non-Aboriginal people didn’t understand, or chose not to understand, was that he was painting his country, the land of the Arrernte people”, said Indigenous community leader Galarrwuy Yunupingu. “He was demonstrating to the rest of the world the living title held by his people to the lands they had been on for thousands of years.” 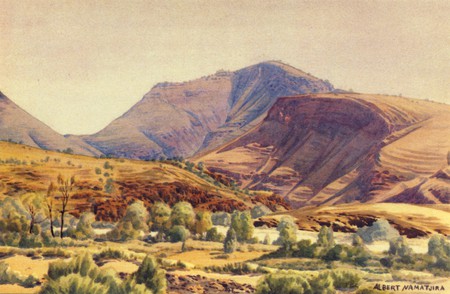 Growing up on the Hermannsburg Lutheran Mission near Alice Springs, Albert didn’t pick up a paintbrush until his thirties. When a travelling exhibition arrived on the mission in 1934, one of the artists — Rex Battarbee — saw potential in Namatjira and took him under his wing, introducing the budding painter to the watercolour technique that Albert soon built a career on.

Namatjira’s first exhibition in Melbourne in 1938 sold out, followed by similar successes in Sydney and Adelaide. He quickly became a household name — his pieces hung in homes around the country, a portrait of him by William Dargie won the prestigious Archibald Prize in 1956 and the humble artist even met notable fan Queen Elizabeth II on a visit Down Under in 1954.

Namatjira produced more than 2,000 paintings over his career, which have left an indelible mark on Australia’s art scene. He even gifted three to his mentor Rex Battarbee in the hospital shortly before his death. Critics agree that he’s one of Australia’s greatest artists, as well as an icon of Indigenous rights. “He was definitely the beginning of a recognition of Aboriginal people by white Australia”, said fellow activist Charles Perkins.

These days, you can find Namatjira’s artworks hanging in nearly every major gallery around the country. The electoral division around his native Alice Springs was renamed ‘Namatjira’ in 2012, his pieces have been honoured on countless postage stamps and there was even a Google Doodle created in 2017 to mark his 115th birthday.