A Tour of Melbourne's Architectural Landmarks
https://commons.wikimedia.org/wiki/File:City_Circle_W7_1010_in_Flinders_Street,_passing_Federation_Square_and_Flinders_Street_Station.jpg
Melbourne / See & Do

A Tour of Melbourne's Architectural Landmarks

If you have limited time in Melbourne, don’t fret, as many of our most architecturally remarkable buildings are located within walking distance of each other. Culture Trip has mapped out a simple route for you to follow, where you will discover six of Melbourne attractions.

Start your tour in Kings Domain at the Shrine of Remembrance. Designed by WWI veterans and architects Phillip Hudson and James Wardrop, the Shrine of Remembrance was built to honour Victorians who served during World War I and has since become a memorial to all Australians who have served in a military operation. Housing over 800 objects, photos and uniforms, The Shrine offers a reverent glimpse into Australian military service. On ANZAC Day and Remembrance Day, commemorative events are held at the memorial. 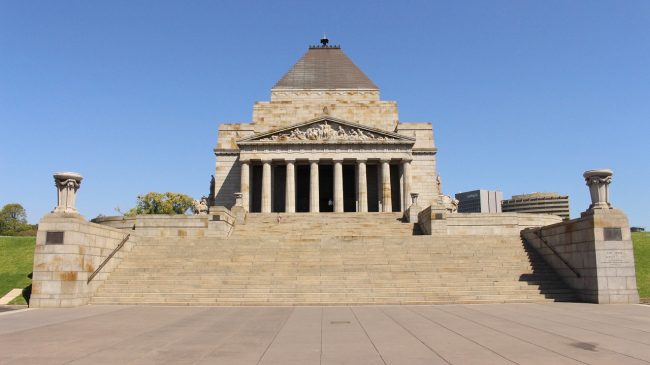 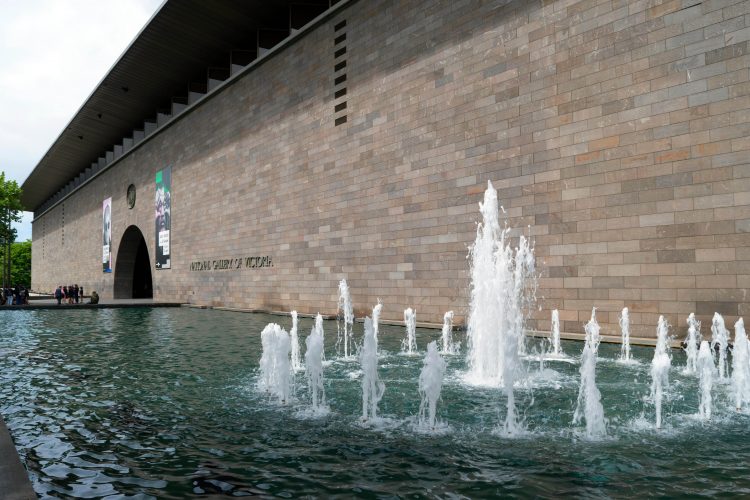 Heading up St Kilda Road, you will come across a monumental bluestone building on your left. Designed by Roy Grounds, the National Gallery of Victoria has a collection of more than 73,000 works of art. Make your way through the arched entrance, behind the wall of water and towards the Great Hall to see the world’s largest stained-glass ceiling, which casts a kaleidoscope of colours onto the gallery floor. Asides from the Gallery’s permanent collection, NGV also holds exhibitions such as Melbourne Winter Masterpieces. 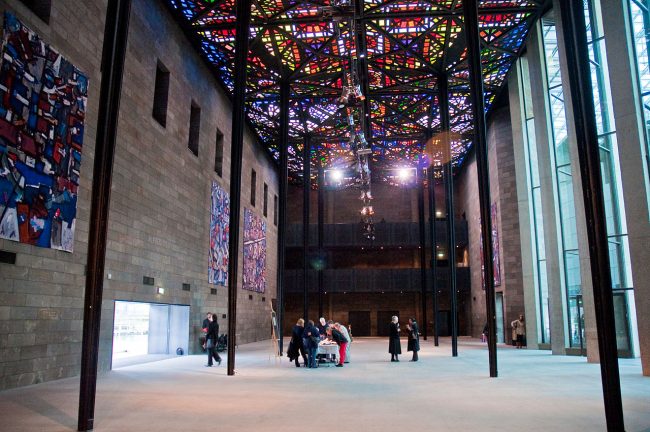 Once you’ve crossed Princes Bridge, you will find Federation Square on your right, sitting on the corner of Flinders Street and Swanston Street. Completed in 2002, the square was designed by Lab + Bates Smart and incorporates deconstructivist design with a modern minimalist style. Known locally as Fed Square, the piazza features three public spaces, restaurants, bars and event spaces as well as ACMI, the Ian Potter Centre and the SBS Television and Radio Headquarters. 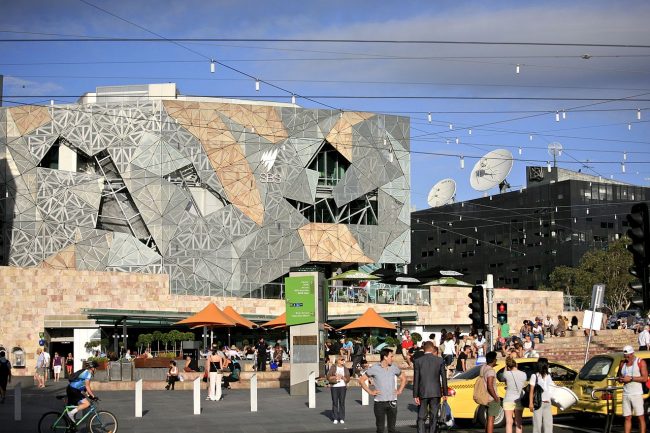 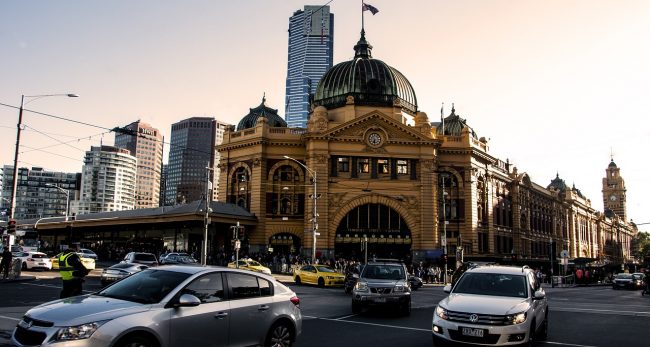 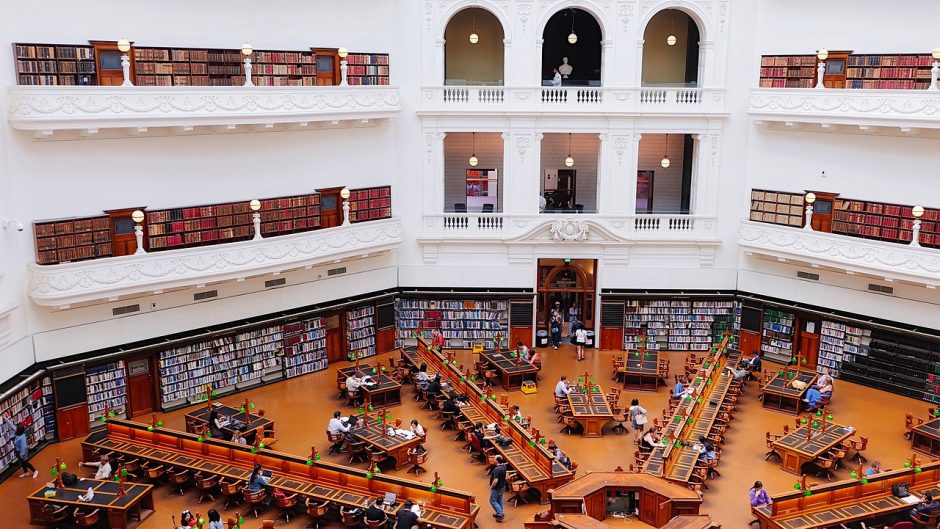 Continue along on Swanston Street for one kilometer, and you will happen on the Neoclassical State Library of Victoria on your right. The Library holds over two million books in addition to significant Australia artifacts, including the diaries of Melbourne founders John Batman and John Pascoe Fawkner, and also Ned Kelly’s original armor. Architecturally, the octagonal La Trobe Reading Room is one of the library’s most magnificent features and is the room where many Melbourne authors have chiseled away at their manuscripts. 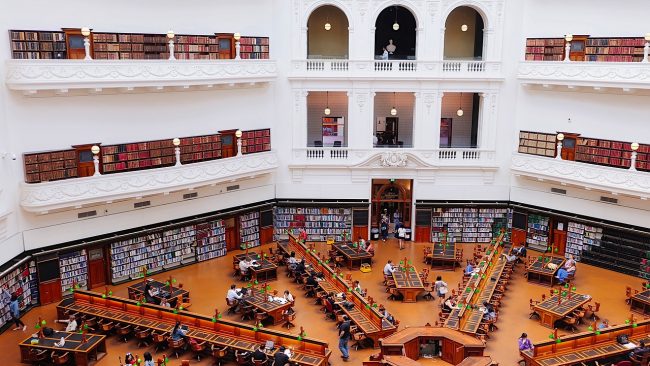 From the State Library of Victoria, turn right onto La Trobe Street. After 850 meters, La Trobe Street meets Victoria Street from which you will see Carlton Gardens. Cross the road and follow elm-lined avenues to the Royal Exhibition Building, which held the first Parliament of Australia on the 9th May 1901. Designed by Joseph Reed, the Royal Exhibition Building was built to host the Melbourne International Exhibition in 1880 and today, the space hosts exhibitions and festivals. 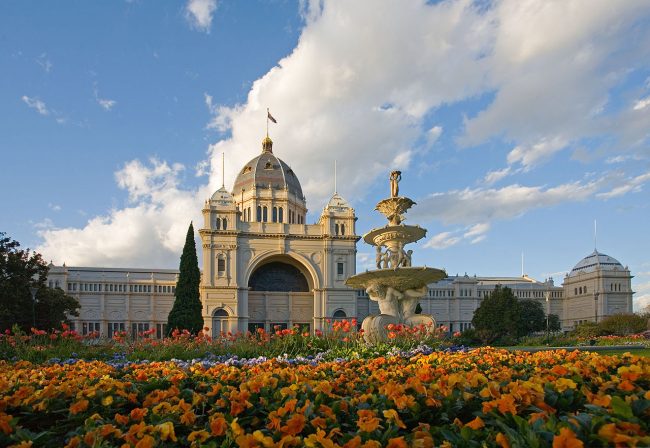