A Tour Of Australia's Big Things 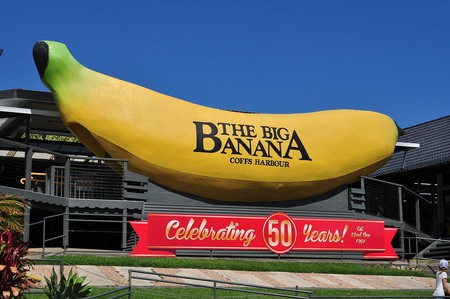 Looking for the perfect road trip? Why not discover the ‘Big Things’ across Australia, from the Big Banana to the Big Lobster and the Big Ned Kelly. Whilst some of these things were built with a purpose and others are purely for novelty, all 150 of them have become a part of our nation.

One of Australia’s wettest towns, Tully, installed the Big Golden Gumboot to represent the record rainfall in 1950. Dozens of historical photographs from the floods the town has seen are displayed on the walls, and you can climb the spiral staircase to the top of the eight-metre boot for views across the town. Designed, fabricated and installed by Brian Newell, the gumboot was unveiled in 2003.

In 2005, the Big Barrel was introduced to Bundaberg as an interpretive visitors centre. Not only is it a centre for Bundaberg Brewed Drinks but also a gift and bottle shop. Within the barrel, a commemorative plaque graces the wall for you to admire whilst indulging in one of their many popular drinks. 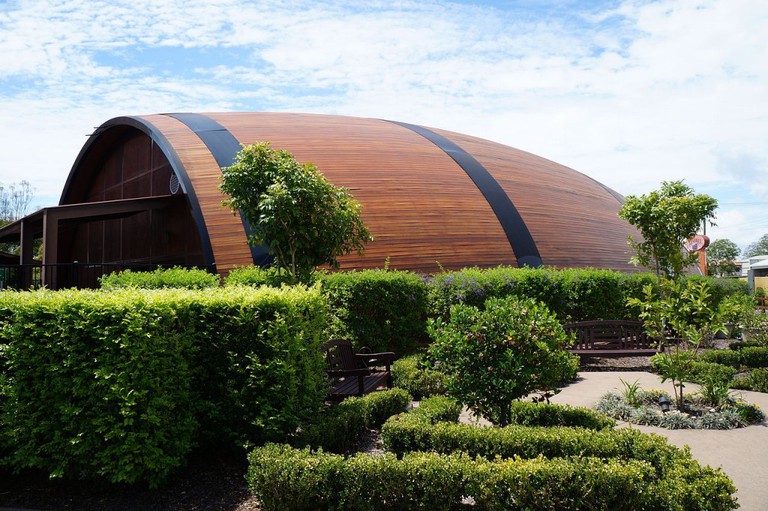 Situated in the carpark of the Eucla Roadhouse on the Eyre Highway, the ten-metre-long three-metre-tall whale was made and designed in Albany. Standing as a symbol for the ‘only shore basted whaling station in the Southern Hemisphere’ – which is now a museum – the whale is commonly visited by the townspeople (less than 100) and people passing through.

Claiming the title of the world’s largest pineapple after the original title holder in Hawaii was dismantled in 1993, the Big Pineapple in Woombye (16 metres x 6 metres) is an iconic heritage-listed attraction along the Sunshine Coast. Opening in 1971, the pineapple is located on a 165-hectare site where you can explore the processes of pineapple farming, visit the café and the wildlife centre. 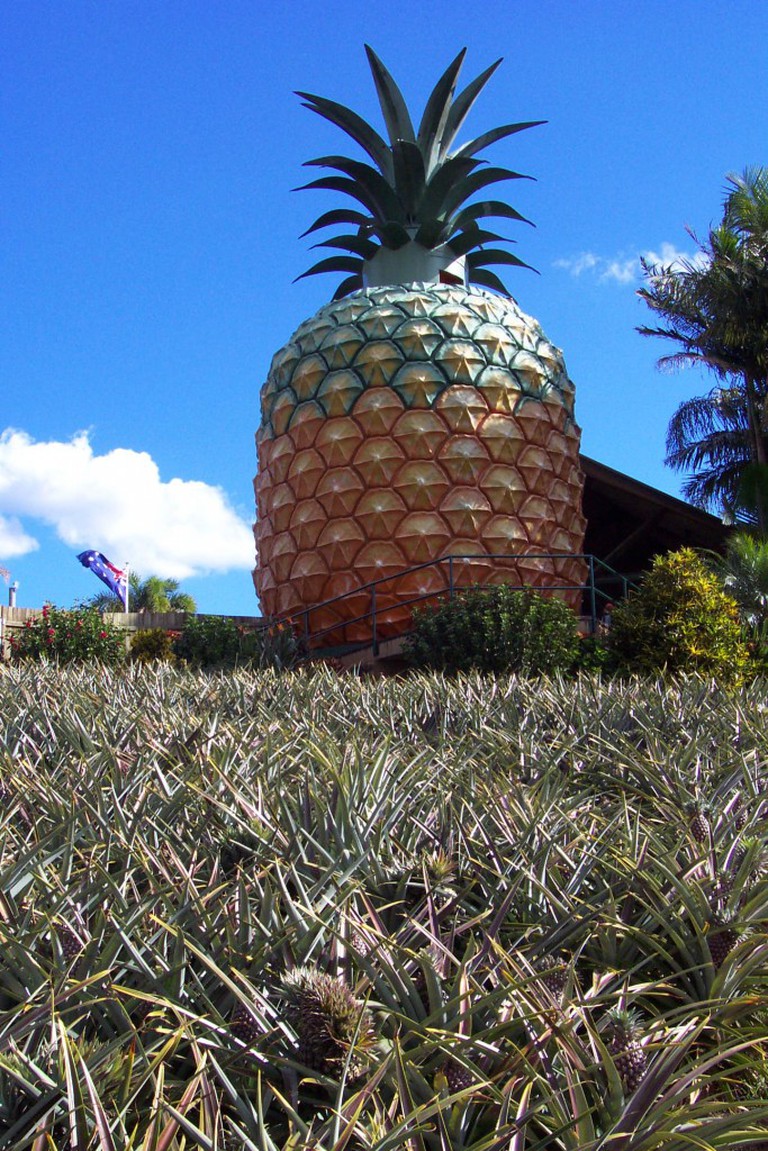 Built in 1998, the eight-metre-tall Giant Mushroom is found in Australia Capital Territory’s Belconnen. Sheltering a children’s playground at the Belconnen Fresh Food Markets, this mushroom was officially opened by the ACT Chief Minister. There is also a Big Mushroom in Balingup, Western Australia.

Known as Rambo to the locals, the Big Merino is a concrete sculpture of a merino ram (15 metres x 18 metres in size) found in Goulburn. Erected in 1985, the sculpture was relocated closer to Hume Highway in 2007 to drive in more visitors to the regional city. With a gift shop and a wool display within, you can also climb to the top for a view of the city from the eyes of the ram. There is also a Big Merino in Blackall, Qld. 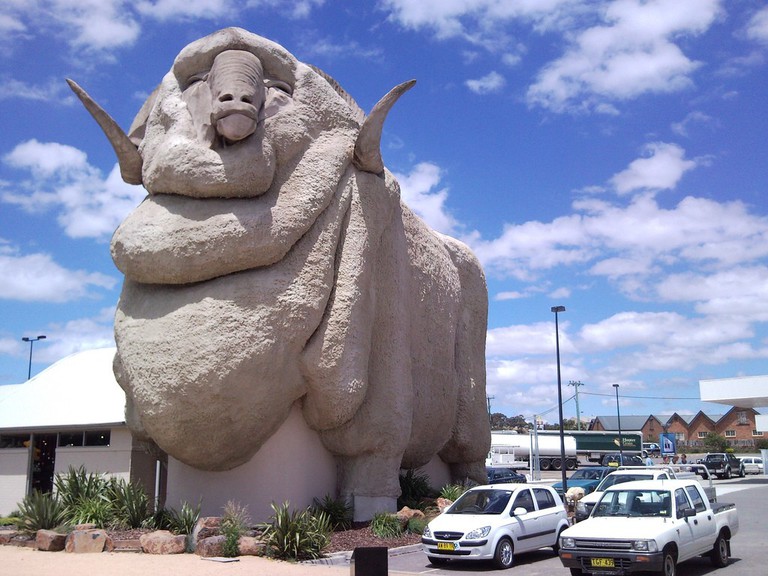 Approximately 150 kilometres north of Alice Springs lies the traditional sculpture of an Aboriginal Hunter. Lying in the Anmatjere Community of the Aussie outback, the statue is 17 metres tall, weighing about eight tonnes. It was revealed in 2005 at the Aileron Roadhouse along the Stuart Highway to increase traffic into this ‘rest stop’.

Outside of the United Fuel Station on Arnhem Highway, in Humpty Doo, is an eight-metre by eight-metre Big Boxing Crocodile. Built by Ray Park in 1988 to celebrate Australia winning the America’s Cup in 1983, the crocodile was developed to attract more tourism to the area of the then-Bush Shop. Other big crocodiles in Australia include the Big Crocodile in Wyndham, WA, the Big Jumping Crocodile in Mary River, NT, and the Big Crocodiles in Daintree, Normanton and Hartley’s Creek, Qld. 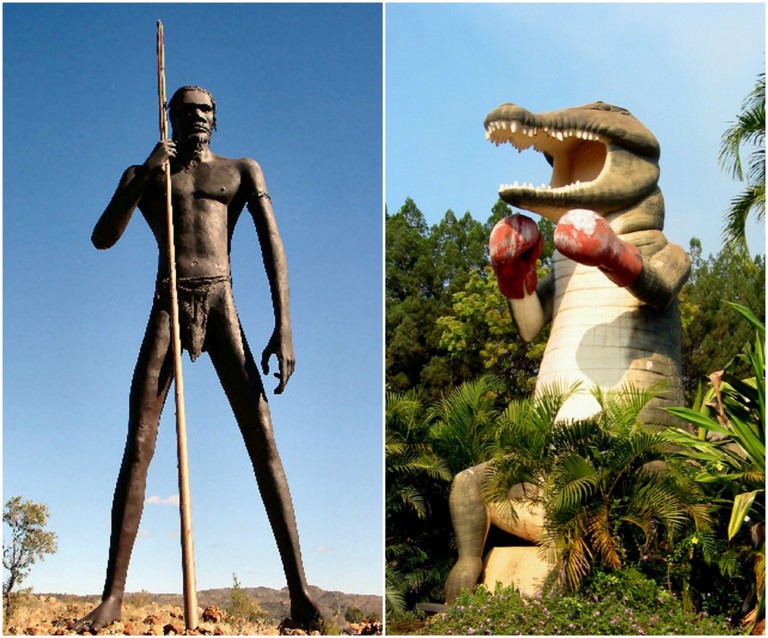 At the main entrance to the town centre of Belconnen, you will find a Giant Owl standing at eight metres tall watching all who enter and leave. Built by Bruce Armstrong – a sculptor from Melbourne – this owl cost the town $400,000 to create and was revealed in 2011.

One of the first and most popular of Australia’s Big Things is Coffs Harbour’s Big Banana. With a large walk-through banana of 13 metres, the Big Banana has become a tourist attraction and amusement park that was erected in 1964. From tours of the surrounding plantation to sliding down the indoor ski slopes, a visit here is a bunch of fun. Other big bananas in Australia include a Big Bunch of Bananas in Coffs Harbour, NSW, a Big Banana in North Mackay, Qld, and a Big Banana in Carnarvon, WA. 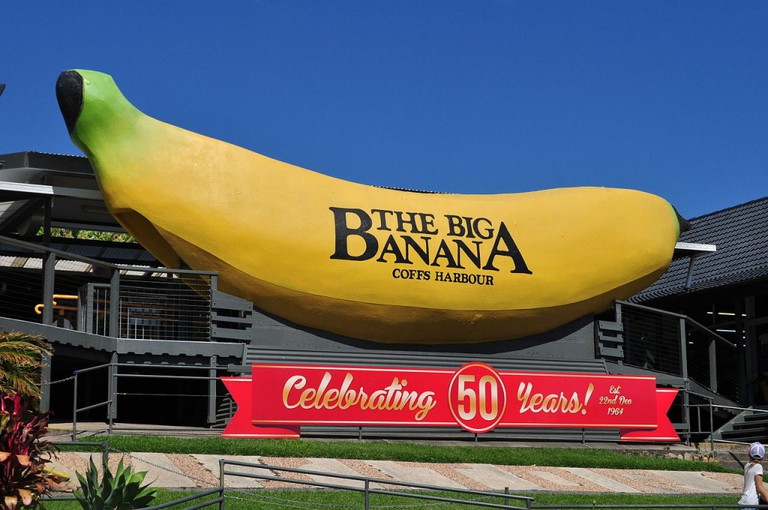 Former British Prime Minister from 1940 to 1945, and again 1951 to 1955, Sir Winston Churchill was commonly known to smoke a cigar. The town of Churchill in Victoria, named after this statesman, created one replica of his cigar even though people originally thought that there were supposed to be five at various points in the town.

In 1988, sculptor Mr Ben Van Zetton was hired to design and construct a Giant Koala. Consisting of bronze set on a steel frame, the Giant Koala – standing at 14 metres tall and weighing 12 tonnes – was unveiled in Dadswells Bridge in the following year. There is also a Big Koala in Cowes, Vic. 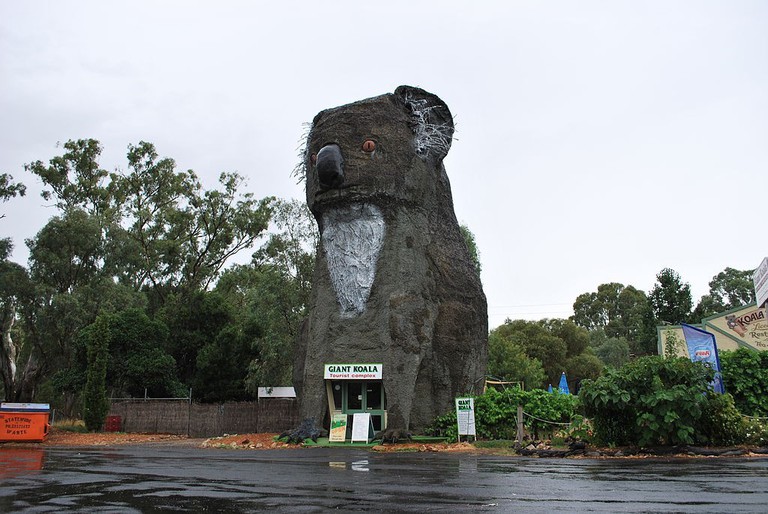 Along the eastern side of Ballarat at the Gold Rush Golf on the Western Highway stands an eight-metre-tall miner (including the two-metre-high concrete base) next to a Big Ned Kelly. Designed by Wayne Johnston and sculpted by Steve Bristow, the Big Miner, unveiled in 2006, stands as a tribute to the many gold prospectors who frequented the region during the late 19th century.

The Australian bushranger Ned Kelly is one of the nation’s greatest folk heroes, standing in iconic armour and symbolised as a convicted criminal. Memorialised by writers, musicians, painters and filmmakers, a six-metre-tall tribute to the bushranger stands in Glenrowan, overlooking the small town. Other large tributes of Ned Kelly in Australia include one in Ballarat, Vic, and another in Maryborough, Qld. 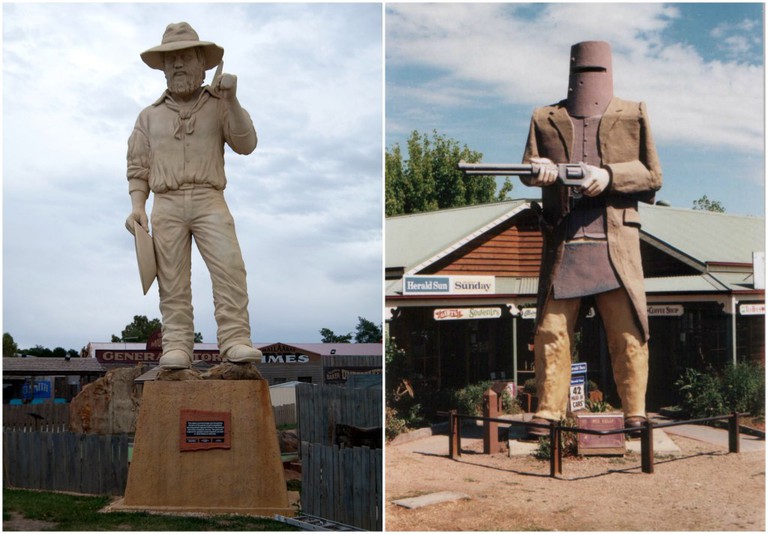 In 2010, a replica bottle of Wirra Wirra Church Block wine was constructed and revealed at the launch of the Melbourne Food and Wine Festival 2010. Being relocated to the Wirra Wirra vineyard in McLaren Vale, this large bottle is made entirely out of recycled corks that cover a steel framework standing ten metres in height.

Locally known as Larry, the Big Lobster in Kingston SE was designed and built by Paul Kelly in 1979 as a means of attracting people to the visitor centre and restaurant. However, the size of the lobster (17 metres x 15 metres x 13 metres) is said to have been an error, with a misinterpretation of measurement as metres rather than the proposed feet. Other big lobsters in Australia include the Big Rock Lobster in Stanley, Tas, and the Big Lobster in Dongara, WA. 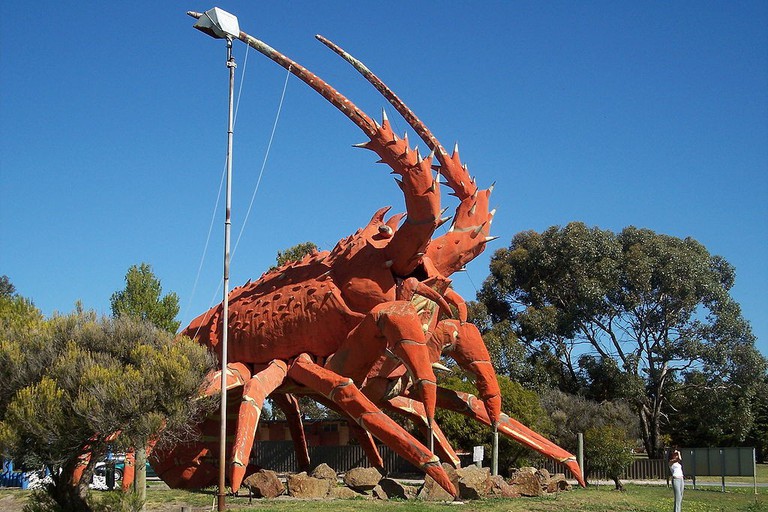 Located at the top end of Hannan Street in Kalgoorlie stands the World’s Tallest Bin. Standing at eight metres in height, this bin was put in place by the Keep Kalgoorlie Klean Kommittee in 1980 during the Tidy Towns competition. This bin is reported to serve as a reminder to people in the town not to litter.

Unveiled by one of the most popular country music artists in Australia, Slim Dusty, in 1988, the Big Golden Guitar stands at 12 metres in height in front of the famous Longyard Hotel in Tamworth. Modelled on the Golden Guitar trophies winners receive at the Country Music Awards of Australia, this guitar is a must-see for all music lovers. Other big guitars in Australia include The Big Playable Guitar in Narrandera, NSW, and the Big Hard Rock Guitar in Surfers Paradise, Qld. 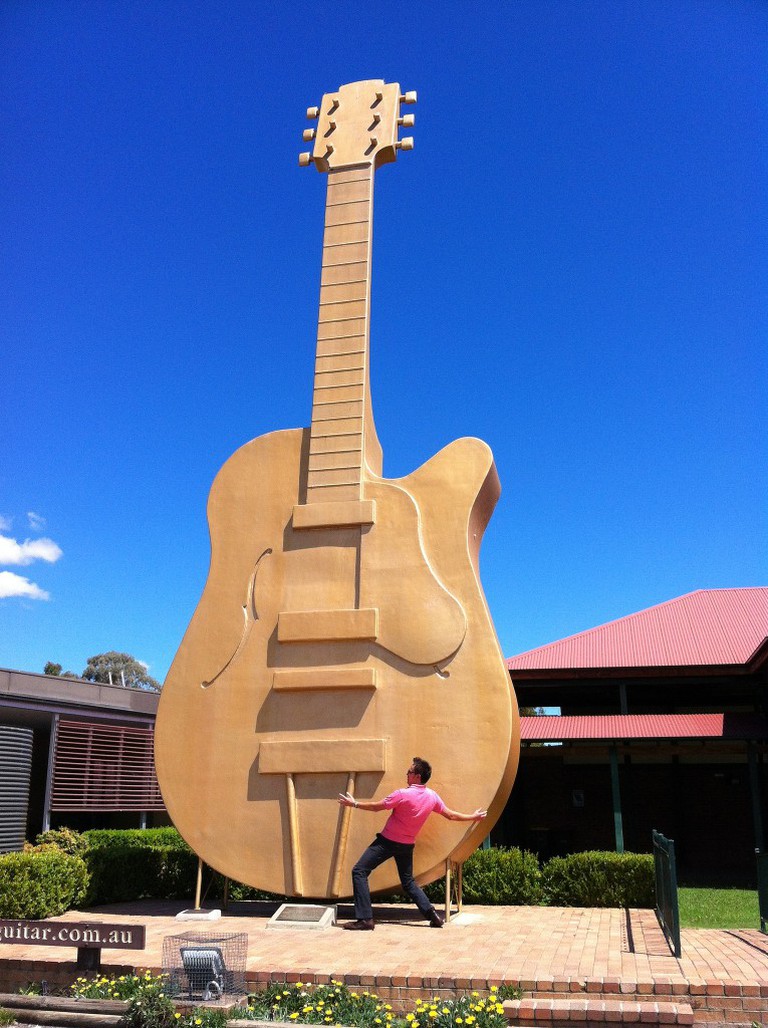 The endangered marsupial Tasmanian Devil – only found in the wild of Tasmania – was the inspiration for the large sculpture in Mole Creek. Standing two metres tall, the Big Tasmanian Devil stands at the entrance of the Trowunna Wildlife Park and the Tasmanian Devil research centre.

At the front of a local cricket pitch in Westbury lies a set of Big Wickets, standing three metres in height. It is a popular stop for cricket players and fans and commemorates the locally born Australian cricketer Clayvel Lindsay ‘Jack’ Badcock, who played in seven Tests between 1936 and 1938. 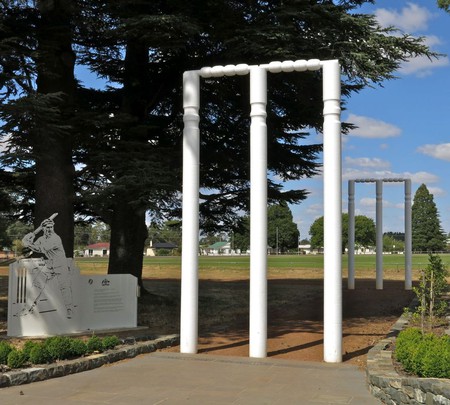