A History of Melbourne's Old Treasury Building in One Minute 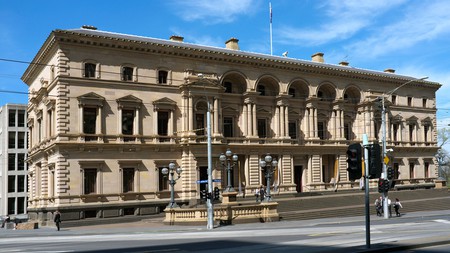 At the top of Collins Street, Melbourne’s Old Treasury Building is a literal treasure trove, having once housed the gold bullion acquired during the Victorian gold rush. From its construction in 1862, until 1878 the building served as the Treasury and the colony’s leaders had their offices here. Today, the building is still frequented by the Governor of Victoria, but it’s primarily a museum of Melbourne’s cultural and financial heritage; a rich history indeed.

JJ Clark was just 19 years old in 1857 when he began work on the design for the Treasury, and it grew to reflect the rapid development of Melbourne as gold rush wealth came flooding into the city. Constructed using bluestone from Footscray and Bacchus Marsh sandstone, the Italian palazzo style building is three storeys high, 200ft (60m) wide and exemplifies Renaissance revival architecture. Completed in 1862 the Treasury’s vaults were used to store gold bullion, and the whole place was home to the Treasury Department of the Government of Victoria. The Governor, Premier, Treasurer and Auditor General kept offices here. When the department relocated to 2 Treasury Place in 1878 the building was rechristened ‘Old Treasury’. To this day, however, the Governor of Victoria (former judge Linda Dessau) holds weekly meetings in the Executive Council Chamber to sign off legislation.

The Old Treasury Building houses several permanent exhibitions including ‘Victorian Archival Treasures’ which presents the history of Victoria through original documents, photographs and artefacts. These cover themes such as indigenous Victorians and white settlement, Ned Kelly and criminals, and the gold rush. The ‘Built on Gold’ exhibition allows you to step into the vaults and learn about the decade-long explosion of wealth that occurred in Australia in the 19th century.

Despite being set in Boston, the Nicholas Cage thriller Knowing was filmed in a variety of locations around Melbourne, and one sequence features the Old Treasury Building. Other landmarks to look out for (if you care to) include Melbourne Museum and Parliament House. Fame at last.