Located by the hustle and bustle of King George Square in the heart of Brisbane City, Brisbane City Hall is an impressive structure of concrete, granite, sandstone and marble that serves as the seat of the city’s local arm of government.

Constructed in the Italian Renaissance style, it’s a sophisticated building, formal, symmetrical and featuring tall columns. The 70-metre-tall clock tower serves as a centrepiece, inspired by St Mark’s Campanile in Venice, Italy. When it was built, the 4.9-metre diameter clock faces were the largest in Australia. It was the tallest building in the city for decades, until height restrictions were relaxed in the 1960s.

Although the layout incorporates offices, public spaces, galleries and reception rooms, the most impressive internal feature of City Hall is the massive auditorium. The 2,500-seat circular hall was inspired by the Pantheon in Rome. It features a domed copper roof, which has since been renovated to incorporate a light show made from 8,500 LED lights. This auditorium also houses the city’s pipe organ, a musical machine incorporating 4,600 pipes. 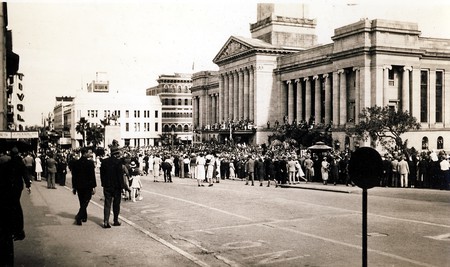 It’s almost a miracle that the building came to be a striking architectural masterpiece. When the Queensland Governor laid the first foundation stone in 1917, the architects and engineers had not yet finalised the plans. It’s hardly surprising that this foundation stone was later found to be in the wrong position and had to be removed. While the construction works wouldn’t finish until 1930, the council began operating out of sections of the building from 1928. At the unofficial opening ceremony, Lord Mayor William Jolly marked the occasion by paying his personal electricity bill – the first of many transactions the council would manage from this space.

Critical redevelopments were then made in 2010 to stabilise the foundations and stop the whole building from slowly sinking (the ground underneath is quite swampy). However, these works also allowed the city to incorporate more people-friendly features into the floorplan. As a result, there’s more to this space than council administration these days. The refurbished spaces are popular for public gatherings like conferences, fashion shows and classical concerts. The rooftop was redesigned to incorporate a modern museum.