A Brief History Of The Old Melbourne Gaol

Located on Russell Street, The Old Melbourne Gaol was once used to house Victoria’s most notorious criminals, including bushranger Ned Kelly and gangster Squizzy Taylor; however, today the bluestone building operates as a museum featuring ghostly tours and fascinating insights on the facility.

Construction on Melbourne’s first permanent gaol began in 1839 on Collins Street West; however, the area was deemed too small and a second gaol was built on Russell Street. On the 20th of January 1842 the gaol carried out its first executions and two Tasmanian Palawa men were hanged in front of much of Melbourne’s population. On the 1st of January 1845, the first cell-block opened, housing dangerous criminals beside petty thieves and the mentally ill.

With the discovery of gold in 1851, Victoria’s population jumped from 23,000 to 90,000, which led to overcrowding issues with many escapees. Due to the congestion of criminals a new wing was added, inspired by the Pentonville Model Prison designs of British engineer Joshua Jebb. The new wing, which opened in 1859, included improved ventilation, clean water, an exercise area, steam bath house, kitchen, and food hoist.

In 1864 a replica of the east block was built to house women, who up until then had been kept in the same cellblock as men. That same year the perimeter wall was also completed and by 1870 all major construction on the gaol was finished. Once complete, the prison became a significant feature of Melbourne’s skyline, taking up an entire city block. 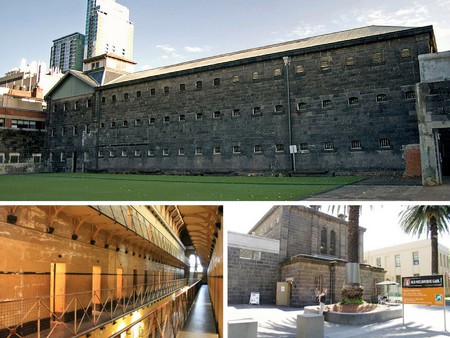 Notorious bushranger Ned Kelly arrived at the Old Melbourne Gaol on the 29th of June 1880, after the battle in Glenrowan where he was captured. Once Kelly had recovered from his injuries he was transferred to solitary confinement in cell number 113. On the 11th of November, at the age of 25, Kelly became the 101st person to be hung, after muttering the words ‘such is life.’ At the time Kelly’s mother was also serving time in the third block. Sadly, both Kelly and his mother’s ordinal cells were demolished; however, the platform from which he was hung still exists and his death mask is on display in the museum, along with the pistol used in the final battle. Another prominent prisoner was Frederick Bailey Deeming, who was suspected of being Jack the Ripper. He was executed in March 1892 as a reported 12,000 people cheered outside.

In July 1929 the prison was decommissioned, and the bodies of executed prisoners were dug up and reburied at a mass grave in Pentridge Prison; however, grave robbers took the opportunity to steal bones thought to have belonged to Ned Kelly, including his skull.

In 1942 the gaol reopened and was use by the US military during World War II for soldiers who were ‘absent without leave.’ Decades later, in 1979, RMIT University restored parts of the complex and the section is now referred to as RMIT Building 11 and includes the entrance block, chapel and bath house.

Nowadays the Old Melbourne Gaol is operated by the National Trust and attracts 14,000 visitors a year. Historical memorabilia, including death masks, Kelly gang weapons, the pencil used by Colin Ross and prisoner information are on display. Tours such as the candlelit Hangman’s Night Tour, Watch House Experience and Crime and Justice Experience will give you a thorough and frightful understanding of what prison life was like.