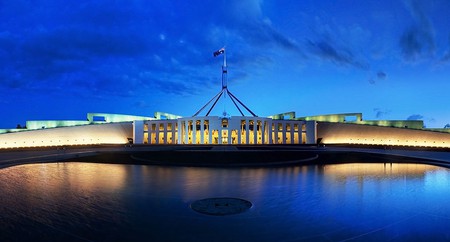 The long-standing, bitter rivalry between Melbourne and Sydney meant that neither city would be selected as the nation’s capital, and after much deliberation, Canberra was chosen in 1909; however, Parliament continued to operate in Melbourne until 1927 in the Royal Exhibition Building. On the 9th of May 1927, Old Parliament House was opened by the Duke and Duchess of York. Originally named Provisional Parliament House, the building was intended for a maximum of 50 years use.

Exactly 61 years after the official opening of the Provisional Parliament House, Queen Elizabeth II opened Parliament House on the 9th of May 1988. The date coincided with the 200th anniversary of European settlement in Australia. Originally, it was hoped that the building would open on Australia Day 1988; however, construction was delayed.

Initially, it was proposed that the Old Parliament House be demolished; however, there were calls to preserve the building due to its historical significance. Construction began in 1981 with one million cubic metres of rock excavated across the 80-acre site. The building sourced most materials from Australia, including stainless steel from Wollongong and Australian granite. The project had been estimated at the cost of $220 million; however, in total, the building cost more than $1.1 billion. 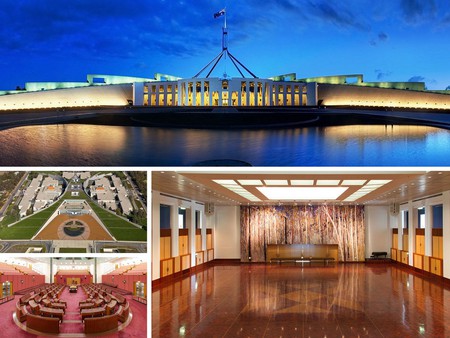 Following a design competition, held by the Royal Australian Institute of Architects and the National Capital Development Commission, 329 entries from 29 countries were received. The winning design came from the Philadelphia-based firm Mitchell/Giurgola & Thorp Architects, who were inspired by the shape of two boomerangs. The building is 107 metres tall and features an 81-metre stainless steel flagpole. Nelson Jagamara’s dot-style painting served as inspiration for The Forecourt Mosaic, and the main foyer features a grand marble staircase and a tapestry based on the work of Arthur Boyd. The tapestry is one of the largest in the world, measuring 20 x 9 metres, and depicts a eucalyptus forest. Below the tapestry and behind a partition lies the Members Hall, featuring a water feature, and beyond that is the Ministerial Wing in which the Prime Minister’s office is located. Flanking the Members Hall is the House of Representatives Chamber, which is decorated in eucalyptus green in tribute to the British House of Commons, while on the opposite side is the Senate Chamber, decorated in red in commemoration of the House of Lords.

The Parliament House Art Collection encompasses more than 6,000 works of art including portraits of every prime minister as well as significant parliamentary figures. Other noteworthy pieces include Tom Roberts’s Big Picture and Red Ochre Cove by Mandy Martin. Venture outside to The Outdoor Sculpture Garden and you’ll discover some of the Parliament’s most impressive pieces including Ewa Pachucka’s Fossilised Architectural Landscape and Howard Taylor’s Compass and Perspective.