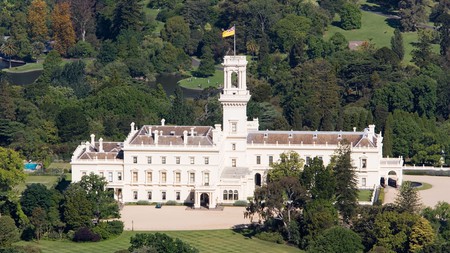 Since 1876, Government House, Melbourne has been the official office and residence of the Governor of Victoria – a position currently held by the Honourable Linda Dessau AM. The Italianate building was once the grandest government house in the British Empire, and annually on Australia Day, the public is invited to tour the residence and its surrounding gardens.

In 1851, Victoria officially became a separate colony with Charles La Trobe taking up the role of Lieutenant-Governor. Since that time, there have been five chief residences of the Victorian Governor. The first was La Trobe’s Cottage, which has since been relocated and operates as a museum. From 1854 to 1874, Governors lived at Toorak House, and after 1874, they resided at Bishopscourt until 1876, when the current Government House was ready for occupancy.

Neighbouring the Royal Botanic Gardens, the land for Government House was set aside in 1841 by Lieutenant-Governor Charles La Trobe, although construction did not begin until 1872. Designed by William Wardell (St Patrick’s Catholic Cathedral) and JJ Clarke (the Old Treasury Building), the building reflects the Italianate style of the Victorian Period and shares similarities with Queen Victoria‘s Osborne House, which she adopted as her summer residence on the Isle of Wight. At the time of construction, the building was rumoured to be the largest government house in the British Empire. The building is decorated in the neo-classical style and is divided into the State Apartments, which host state and community receptions; the Private Apartments, which house the Governor’s living quarters; and the sprawling gardens and grounds. Government House also includes a 44-m (145-ft) belvedere tower with views of the surrounding lawn. You can tour the house by visiting this virtual tour.

Government House is open to the public on Australia Day each year. Visitors can wander through the gardens and tour the residence for a look inside Victoria’s most historically significant building. Entry is free and includes musical entertainment, children’s activities and light refreshments.

Appointed by the Queen, under the recommendation of the Premier of Victoria, the Governor of Victoria works “at the queen’s pleasure” and “in accordance with the conventions of the Westminster system”. The Governor performs a number of roles, including opening parliament, appointing the Premier and Ministers of the Crown, and has the power to dissolve Parliament and dismiss the Premier, among others duties. The current Governor is former judge, Honourable Linda Dessau AM, who became Victoria’s first female governor in July 2015.