A Brief Guide to the Twelve Apostles, Victoria

Travelling along the Great Ocean Road, you can’t help but notice Australia’s famous Twelve Apostles creating a dramatic scene along Victoria’s coastline. Although not all of the original Apostles remain standing, this sight will pull you into a moment of tranquility and astonishment found nowhere else in the world.

History of the Twelve Apostles

Over 20 million years ago the Twelve Apostles were once attached to Victoria’s rugged limestone cliffs before the Southern Ocean began to erode them. As a result of erosion a variety of arches and rocks were separated from the cliffs, standing up to 50m in height. Boasting an array of names such as Bakers Oven Rock, The Grotto, Thunder Cave and Razorback, these apostles were originally named ‘Sow and Piglets’ but were renamed to The Apostles in 1922 for tourism purposes, and eventually became known as the Twelve Apostles.

Situated in the Port Campbell National Park and Twelve Apostles Marine National Park, the Apostles have slowly collapsed over time. The London Arch – formerly known as London Bridge – collapsed in 1990, turning into a bridge without a middle. Today there are only eight remaining apostles and mother nature continues to cause them to erode at up to 2cm per year. 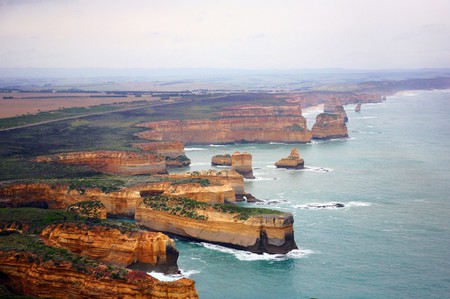 What To See and Do

From sunrise to sunset, the Apostles stand beautifully against the cliffs showing off their many faces in the various lights of the day. Whether driving past along the Great Ocean Road, or stopping to admire these rock formations, visitors are left in awe over their size and beauty. At the Twelve Apostles Centre you can discover the cultural heritage these Apostles hold, and also begin your journey to discovering these natural stars along the coastline.

Along the Great Ocean Walk – from Apollo Bay to the Apostles – you can spend hours exploring the deserted beaches and coastal scenery as you weave your way through the Great Otway and Port Campbell National Parks. Standing at the height of the cliffs, you will come across a narrow opening to the Loch Ard Gorge. In rough weather the waves crashing against the rocks puts forward a spectacular natural show. While the geological formation caused by a sinkhole, known as The Grotto, provides a sense of eeriness in tranquility. Also be sure to take the Gibson Steps to the beach below where you will feel very small next to the Apostles, as well as discovering the Bay of Islands, The Arch and the Bay of Martyrs.

Not only is there plenty to explore within the parks, but you can explore the breathtaking coastline by catching a light plane or a helicopter to the skies. Alternatively you can snorkel and dive through the marine life found in the Twelve Apostles Marine National Park, or explore the towns that populate the coastline. 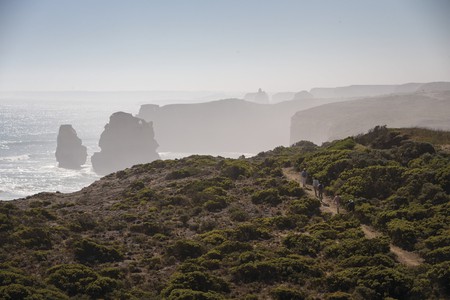 With spectacular uninterrupted views of Port Campbell Bay, 12 Rocks Cafe & Beach Bar offers beachfront, al fresco dining in a laid-back atmosphere. Serving great brekky and diverse pub-grub meals, you can stop by for a quick meal or relax here before embarking on an adventure.
Aireys Pub

Rustic and homey Aireys Pub, located along the Great Ocean Road, offers classic bistro meals and local craft beers to delight all who stop by. Featuring a fireplace and stone walls, you will warm up from the cool sea breeze in no time.
La Bimba

The cozy little restaurant of La Bimba offers fine modern Australian dining against spectacular ocean views. Creating meals from locally sourced produce, this is the place to be if you want to taste kangaroo meat, local lamb or fresh fish over a bottle of wine. 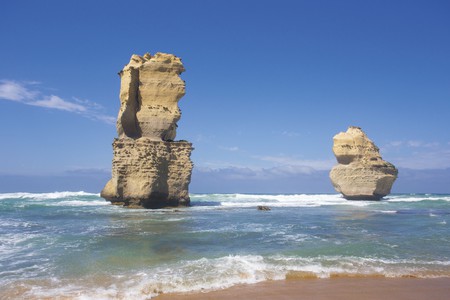 The charming Butterfly Farm B&B is located in a restored and renovated Edwardian homestead, offering a restful haven for you to unwind in from arrival to departure.
Alkina Lodge

Relax in the beautiful private, luxury residences at Alkina Lodge, which offers an intimate experience for those wanting to escape the hustle and bustle. By the open fire is a great spot to enjoy a bottle of wine, or if the skies are clear, be sure to spend the evenings stargazing.
Bellevue Farmstay

Nestled in the hillside of Scotts Creek, Bellevue Farmstay offers a unique experience. Animal lovers will enjoy the company of the resident pets and farm animals, while the warm atmosphere will have you feeling like you’re at home in no time.