A Brief Guide to the Blue Mountains, Australia 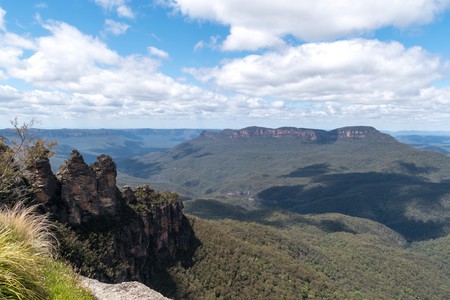 The magic of Australia’s Blue Mountains is well known, but it’s not until you reach the lookouts from above that you realise the true beauty of the blue haze. Whether you are passing through or taking a holiday in the region, there are 2,690sqkm (1,039sqmi) to be explored.

History of the Blue Mountains

In 1788, Governor Phillip named the formations Carmarthen Hills and Landsdowne Hills – but soon after people started to notice the unmistakable blue haze, and the name was changed to the Blue Mountains. The haze is created by oil produced by the area’s abundance of eucalyptus trees combined with dust particles, water vapour and rays of sunshine. Despite this rather majestic spectacle, the area’s rough terrain and a lack of resources meant that it wasn’t until gold was discovered in the Bathurst District during the 1850s that the mountains began to see travellers passing through. By 2000, the Greater Blue Mountains were declared a UNESCO World Heritage area.

Although Governor Phillip officially named the Blue Mountains, it is the Australian Aboriginals who were the first to inhabit the region. The Gundungurra people – whose traditional lands include present day Goulburn and the Southern Highlands – explain the formation of the land with a creation story depicting the intense battle between the Mirigan and Garangatch (half fish and half reptile). 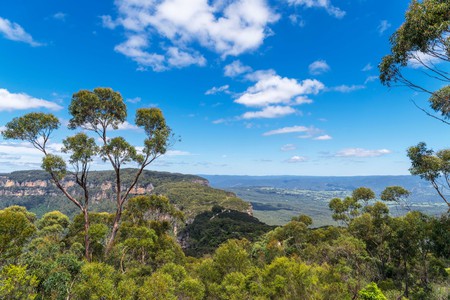 If you’re travelling through the Blue Mountains National Park, you’ll find plenty to see and do, including the trek to Bluff Lookout, pleasant Zig Zag Walking Track and ruins of the Old Pilgrim Inn. At the foot of the Hawkesbury Lookout, you can find a well-preserved ancient rock carving that is commonly known as the Flight of the Great Grey Kangaroo. With an abundance of falls, lookouts and rainforests leading to the Blue Mountain Botanic Gardens, you’ll also find plenty of worthwhile attractions just outside the park, including the Railway Museum, the Springwood Golf Course and many galleries.

One of the most spectacular landmarks in the region is the Three Sisters at Echo Point Katoomba. The Aboriginal legend behind this rock formation states that three sisters in the Katoomba Tribe fell in love with three brothers from the neighbouring Nepean Tribe. Tribal law forbade them to see each other, so the brothers waged a large battle in protest. A local witch doctor turned the girls to stone to protect them, intending to reverse the spell when the battle was over – but when he was killed in the fighting, the three sisters were doomed to be forever frozen in time.

Milkbar at The Lookout

Your ultimate one-stop shop at Lookout Echo Point is the Milkbar. Serving breakfast, lunch and takeaway delights for your afternoon journey, you can enjoy home-made, freshly baked sandwiches, pastries, pies, ice cream and doughnuts. Whether you dine in or take your food to the nearby Three Sisters, there’s no place more convenient.

Perched on the edge of the National Park, Echoes Restaurant & Bar boasts incredible sweeping views of the Jamison Valley. Whether you’re stopping by for a casual lunch or dinner, the award-winning combination of fine dining and location is rather spectacular. The menu is filled with fresh, local Australian cuisine, all with an Asian twist.

The award-winning Blue Mountains YHA sleeps up to 200 people, with the added comfort of a log fire during the winter. The restored, red-brick National Trust building is 1.8km (1.1mi) from the Three Sisters viewing platform and perfect for any traveller or family on a budget.

Bordering the Blue Mountains National Park, the Falls Mountain Retreat is a 13-minute walk from Wentworth Falls, offering self-contained modern suites and cottages each with a fireplace, full kitchen and spa. This luxury hideaway is located on four acres of beautiful gardens – ideal if you’re in search of real peace and quiet.

With unobstructed views of the Kanimbla Valley, the Season of Mists offers a completely private getaway for you to truly take in the tranquil region. Perfect for that romantic break and also for those seeking a bit of luxury, the cosy bedrooms will keep you warm when the snow sweeps through the region in winter.

Stylish
Give us feedback