A favorite day trip destination for visitors and locals alike, Western Australia’s very own Penguin Island is the only place in the state to see the largest colony of the smallest penguin species in the world. Catch a ferry from the mainland to the island from September to June each year to enjoy the true nature of the beautiful island.

The island just off the mainland, closest to Rockingham, was first used by Aboriginal people up to 12,000 years ago. The local Aboriginal legend tells the tale of a local girl who was believed to have run off with her lover, against the tribal law. Located just north of the island is Singing Rock, where it is believed that her tribe chased and caught them, spearing the lover to death and punishing her to imprisonment within the rock. Legend has it that you can hear her singing to her lover today. Although many people cross the sandbar like those in pre-European settlements did, the local Aboriginal elder Theresa Walley installed a warning for visitors in 2002 at Mersey Point to not cross the sandbar.

Whilst the Aboriginal people have a long-running history with the island, it wasn’t until 1914 that New Zealander Paul Seaforth McKenzie became the first person to ‘squat’ on the island. Described as a ‘bearded man with gallant manners and a twinkling eye’, he was granted an annual lease from the Western Australian Government in 1918 to establish a holiday resort in the caves. In 1926, he left the island, returning home to his wife and children after 45 years. After McKenzie left, shifting sands changed the formation of many of his developed caves; however, today you can still see some nails and an old well in the region. It wasn’t until 1987 that the management of the Department of Conservation and Land bought the island, replacing the shacks with the Penguin Experience Discovery Centre, turning the island into what it is today. 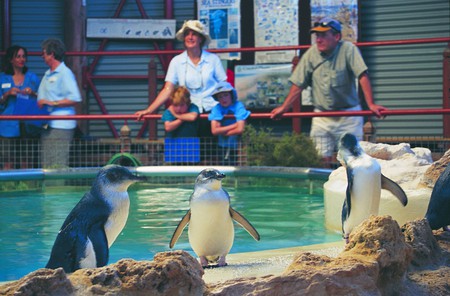 Follow the local Aboriginal elder’s warning and head to Rockingham Wild Encounters to catch the five-minute ferry ride to the island to avoid the dangers associated with crossing the sandbar. Once on the island, there are plenty of things to do on this day trip, from getting up close to the wildlife to exploring the nature trails. The island itself is a haven to seabirds, encouraging visitors to spot an array of birds, especially during September and October when you can spot the newborn chicks. Head out onto the ocean for a humpback whale cruise or a dolphin, penguin and sea lion cruise to come up close with the local animals in their natural habitat. A visit to the Penguin Experience Discovery Centre will introduce you to the little penguins that inhabit the island, and it is here that you can also visit for the penguins’ feeding time.

If you have time, explore the rock pools on the western side of the island, the cliffs, sea caves, natural bridges, lookouts, and walkways, before making your way down to the white sandy beaches. Once on the beach, you can swim, surf, snorkel, kayak, scuba dive, fish and go stand-up paddle boarding, along some of Perth’s best coastal scenery. End your trip with a picnic on the beach, before making your way back to the ferry. 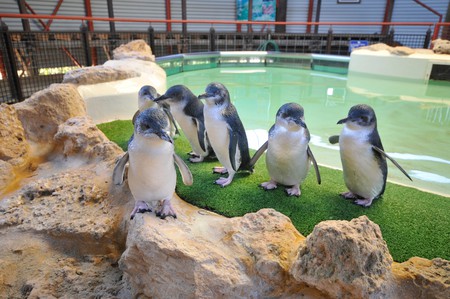 Once on the island, there are plenty of things to do on this day trip, from getting up close to the wildlife to exploring the nature trails | © Courtesy of Rockingham Wild Encounters

With no shops or cafés on Penguin Island, the closest stop is Pengo’s Cafe. Whether you start or end your trip with a snack from the café, there are plenty of cakes, fish and chips, gourmet burgers, fresh salads and coffee to complete your day.

Close by, the Boat Ramp Cafe is a great place to enjoy brekky or lunch before heading out to Penguin Island. Whether you dine in or take your food to eat along the beach across the road, there are plenty of options to choose from.

Who would have ever thought of enjoying Thai food along the beach? Thai By The Sea seem to be the only people to think it’s one of the best ideas. Providing a great atmosphere to enjoy the fish in their mouth-wateringly perfect sauce, this is an ideal way to end your day. 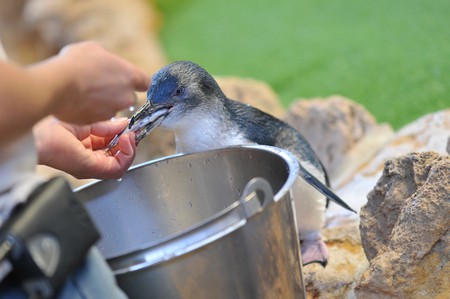 Although there is no accommodation on the island, there are one-, two- and three-bedroom apartments at Beachside that are in the best location. Overlooking the white sands of Rockingham Beach, these spacious apartments are within walking distance of the local coffee shops, bars and restaurants.

Heading south for a 30-minute drive, the modern beachfront, airy apartments of Seashells Mandurah are a self-contained piece of luxury within close proximity to the island and central Mandurah. With the ocean and the Mandurah marina right on your doorstep, there is no better way to wind down after a busy day at Penguin Island.

If you’d rather be closer to the Perth CBD, 30 Arundel Accommodation lies north of Penguin Island in close proximity to Fremantle’s Fishing Boat Harbour. Set in an 1880 limestone cottage, this upscale guesthouse offers seven elegant rooms and a secluded courtyard in which to relax. 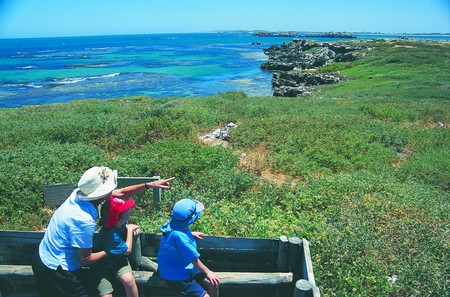 Bird watching | Courtesy of Tourism Western Australia
Give us feedback